History, morality come with fries at the Arctic Roadrunner 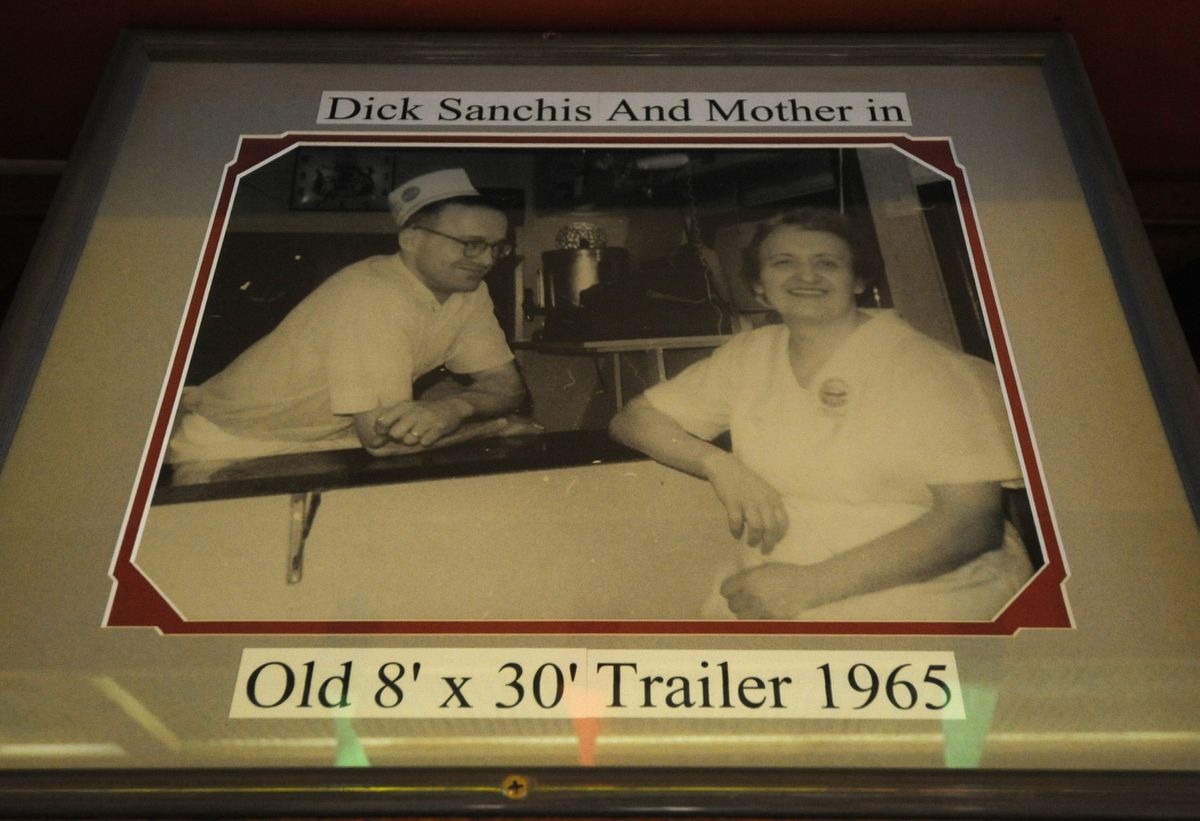 Dick Sanchis and his mother in the trailer they started out in. Dick Sanchis, the owner of the Arctic Roadrunner, has been serving customers since 1964. The inside of the restaurant on Old Seward Highway is covered in photos of customers. Photographed on Thursday, December 8, 2010. (Bob Hallinen / Anchorage Daily News)

Dick Sanchis and his mother in the trailer they started out in. Dick Sanchis, the owner of the Arctic Roadrunner, has been serving customers since 1964. The inside of the restaurant on Old Seward Highway is covered in photos of customers. Photographed on Thursday, December 8, 2010. (Bob Hallinen / Anchorage Daily News)

You go to the Arctic Roadrunner because it serves one of the best cheeseburgers in town.

You don't expect the dash of morality or the heaping helping of history. But like the solitary pickle that rests atop the bun of every Arctic Roadrunner burger, the unexpected side dishes distinguish the place from the rest of the city's burger joints.

The cheeseburgers date back more than 40 years, back to when Dick Sanchis bought an 8-by-30-foot trailer for $75 and took it to the 1964 Alaska State Fair. He sold cheeseburgers for 59 cents (85 cents with fries and a Coke), hot dogs for 49 cents and hot tamales for 25 cents.

The simple red crosses that hang at each of today's locations, and the large, framed signs that spread the gospel according to Sanchis, came in the early '70s.

And the photo gallery — a larger-than-life scrapbook of Alaskans famous and not-so-famous — came a couple decades later.

Sanchis, 66, didn't set out to become a grill-cook-turned-philosopher-turned-historian. Things just sort of happened, beginning with his decision as a young man to be his own boss. His desire for independence goes back to when he was living in Chicago and met an attractive brunette one day at Lake Michigan. They didn't exchange names, but when she told him she usually came to the lake on Thursday afternoons, Sanchis figured they had an unofficial date.

When he asked his boss if he could have the next Thursday afternoon off, his boss told him sure. "But don't bother coming back."

Sanchis still thinks about the missed tryst. More than that, he remembers how lousy it was to work for an inflexible boss. That's why he tells his managers that if he catches them working 60-hour weeks, he will fire them.

Remnants of a street-tough Chicago accent remain when Sanchis shares opinions and philosophies, something he does with little coaxing. He likes to talk with pen and paper, writing down key words and underlining them. He doesn't go more than a few sentences without a "Lemme tell ya what I mean" or a "Ya know what I'm talkin' about?" A conversation with him can easily last half a day.

Even if you don't know him to talk to him, you learn something about Sanchis simply by going to one of his restaurants. Before customers ever see the menu, they see this sign outside the door:

"Our personal and business policies … Sincerity. Honesty. Equality. Justice. Perfect — NO. Conscientious — YES. We believe in this. For no man will we ever change."

A flag-waver long before 9/11, Sanchis came to Alaska with the Army in 1962. He's a love-it-or-leave-it patriot who remembers growing up in Chicago during World War II when trains filled with troops stopped in the city and bombers headed to Europe flew overhead. At the Old Seward Highway store, there's a copy of the Bill of Rights and framed quotations from Abraham Lincoln. At the Arctic Boulevard store, there's an essay about what it means to be an American.

Inside both stores hang a wooden cross. Near the cross hangs a plaque: "Let there be peace on earth, and let it begin with me."

Friends tried to dissuade Sanchis from displaying such personal beliefs so publicly. "You might offend someone, " they told him.

Sanchis did it anyway. "I wanted to let people know my position without being a Bible-thumping guy, " he said.

If anyone's been offended, it doesn't show. The restaurants are busy, the customers are loyal, and Sanchis figures he's sold close to a million burgers over the years — even though he always closes on Sundays and most holidays.

The most loyal of the customers — 900 and counting — are enshrined in a photo gallery at the Old Seward Highway store. The chief requirement for inclusion is that you've been a customer for at least 20 years.

There's a picture of James McCarry, the last territorial judge to serve the Anchorage area, and another of Herb Hilscher, who helped draft the Alaska Constitution. There's one of Dick and Carol Benjamin, who started Abbott Loop Community Church, and one of Mark Schlereth, the three-time Super Bowl winner.

"I know all these people, " said Sanchis, who's been a pallbearer for more than one member of the gallery. "Some of them I talked to five or 10 times, others two- or three-hundred times.

"There's so much history in this place. It's amazing."

Even more amazing? It all comes with fries.