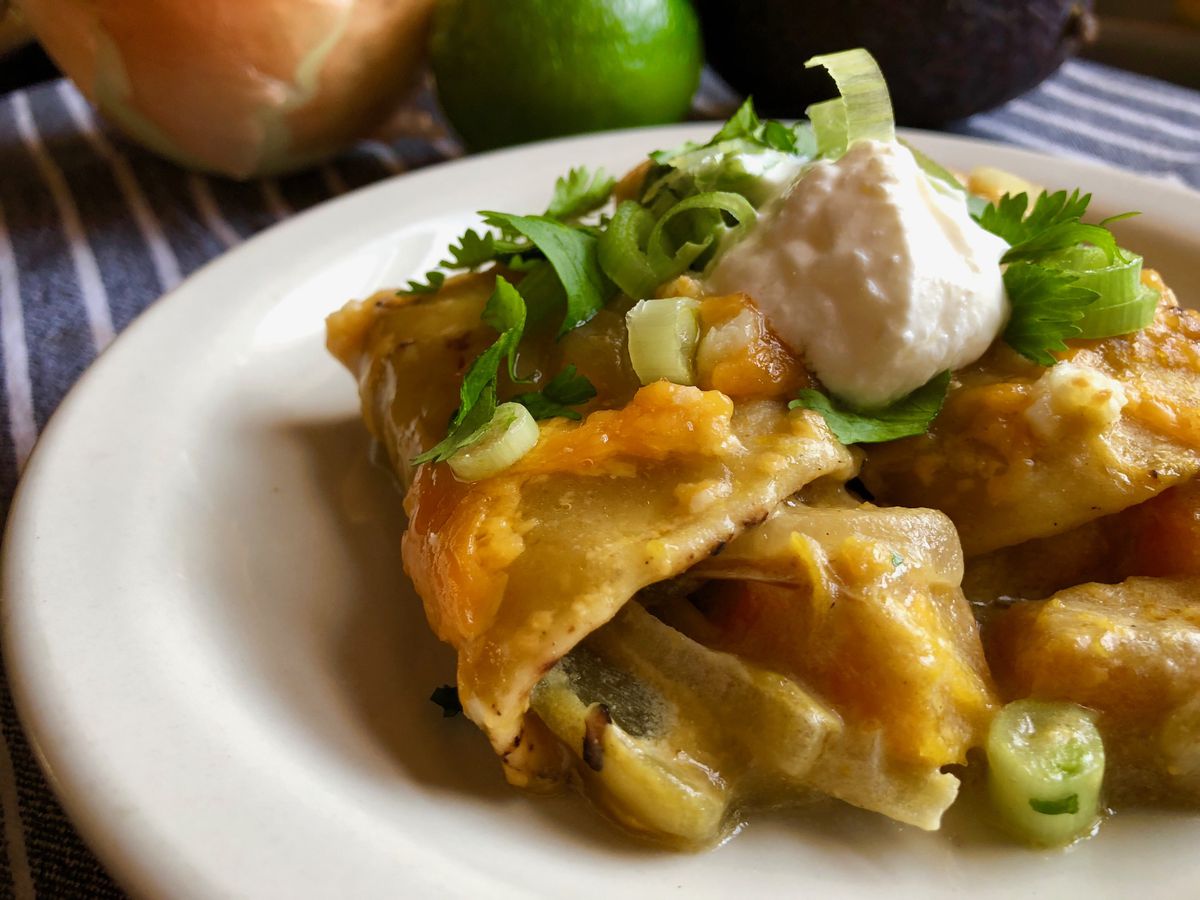 Call me romantic, but I'm all about trying to cement food traditions for my kids. For whatever reason, it seems important to me that their memories taste like something. (Half the time, they'd rather just be eating plain pasta with butter, but still I persist.) At New Year's, we make cream puffs. And I make doughnuts on the first morning of the Iditarod. On Halloween night, it's enchiladas. They're easy to make ahead, and if you double the recipe, they can easily serve the whole trick-or-treat crowd.

Over the last few years, I've made them with pumpkin because it's so easy to find sugar pumpkins this time of year. The dish is meatless and perfect for vegetarians. This recipe works as well with butternut squash, like the kind you find pre-chopped at Costco. Just roast it for about 15 minutes ahead of using it in the enchiladas. (Or, in a pinch, you can also just throw in some shredded rotisserie chicken for regular enchiladas and shave off prep time.)

You'll only use half a sugar pumpkin unless you double the recipe (which I usually do). You can freeze the other half and use it for Thanksgiving pie. Fresh pumpkin pie is easy to make and marvelous.

Preheat the oven to 350 degrees. Use a fork to poke holes in the pumpkin, put it in the oven and let it roast, whole, for 20 minutes, until its flesh is soft when you press it. Meanwhile, sauté onion in a splash of olive oil over medium heat until beginning to caramelize, then set aside. When the pumpkin is roasted, remove it from the oven and slice in half, holding it with one hand using a pot holder and being careful not to burn yourself. (Don't turn off the oven.) Allow to cool for a few minutes until you can handle it, scoop out seeds and peel off the skin under running cold water (it should be easy to remove). Pat the pumpkin dry and chop it into bite-sized pieces. (Clean and chop the other half and throw in the freezer for pie.) You should have roughly 2 to 2 1/2 cups. Combine chopped pumpkin, onion, green chiles, cumin and sour cream.

On a gas burner, heat each of the tortillas over the flame, turning with tongs, until it is hot, slightly toasted and pliable. (You can also heat them over electric heat in a dry cast-iron skillet, turning frequently). Coat the bottom of an 8-by-8 pan with enchilada sauce. Pour the tomatillo salsa or the rest of the enchilada sauce into a bowl. Create an assembly line with the warm tortillas, the bowl of sauce/salsa, and the filling. Dip each tortilla into the sauce, fill with several spoonfuls of pumpkin filling, roll and place in the pan, seam side down. When the pan is full, pour a generous layer of enchilada sauce over the enchiladas, sprinkle the cheddar and the cotija. Bake at 350 degrees for 30 minutes. Garnish with a sprinkle of cilantro, green onion and a dollop of sour cream.