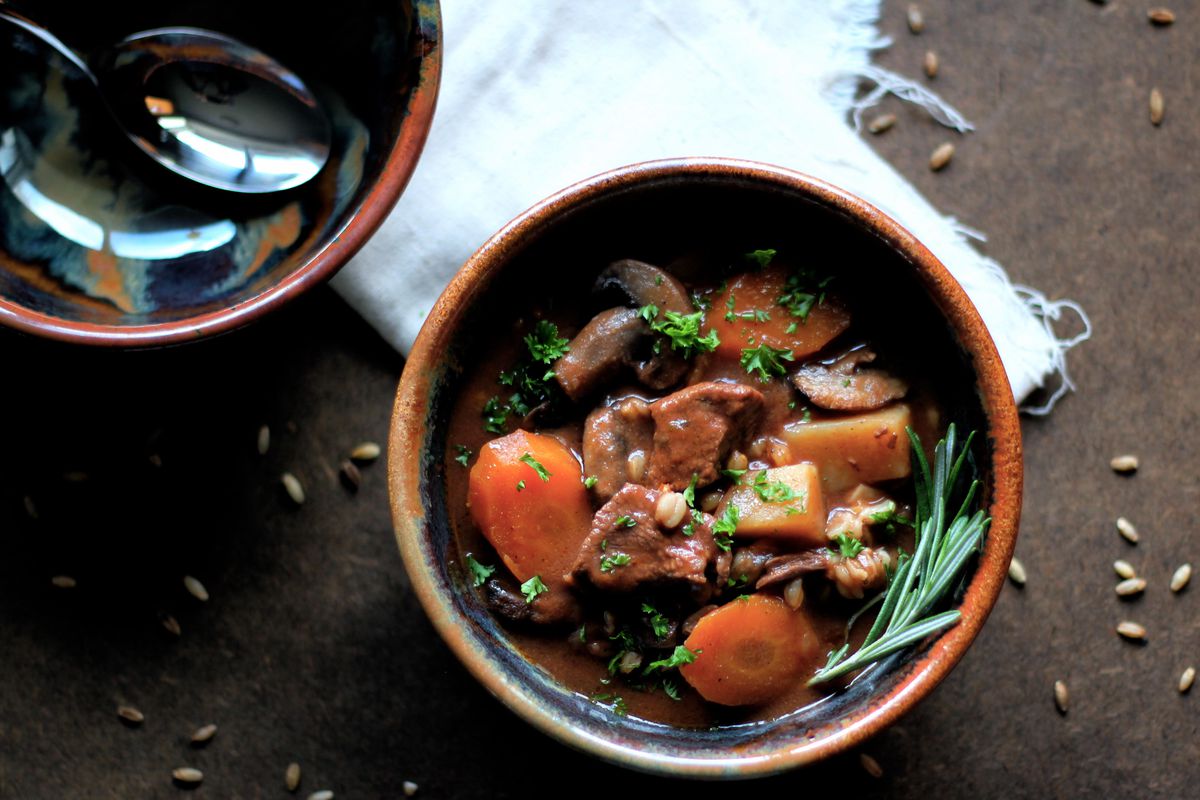 Snow has arrived in Anchorage — none here in Kenai just yet — and daylight saving ends this Sunday. It's prime time to pull out the old Crock-Pot and get her ready for the long winter ahead. Mine hadn't seen the light of day in quite some time.

I've had a bag of barley from Alaska Flour Co. I've been itching to use, and another sample from a local farmer in anticipation of the restaurant opening. There's something very hearty and wholesome about it, the way it gives body and texture to a pot of soup or stew. After spending six hours in a slow cooker, the whole barley still has a bite to it, almost al dente, if you will. It's perfect alongside fork-tender beef and substantial bites of potato and mushroom.

This slow-cooker beef and barley stew is hands-down the best beef stew I've ever had, thanks in part to a secret ingredient in the broth: Dijon mustard. It makes great leftovers, too.

To a large Dutch oven over medium-high heat, add the oil. Season the beef generously with kosher salt and pepper. Working in batches in a single layer on the bottom of the pan, sear the meat until browned on all sides. Transfer the seared beef to a plate to rest while repeating with the remaining batches.

When all of the beef has been seared and set aside, add the carrots and onion to the pan. Cook, stirring occasionally, about 3 minutes. Add the garlic and mushrooms to the pan and continue cooking another 2 minutes. Add the potatoes and rosemary. Deglaze the bottom of the pan with the red wine, scraping the bottom of the pan with a spatula. Stir in the tomato paste, Dijon mustard, thyme and bay leaf.

Transfer the contents of the pot to the slow cooker. Pour in enough beef broth to cover, about 6 cups. Stir in the barley. Cover and cook on high for four hours. Reduce the temperature to low and cook two more hours. Discard the rosemary sprig and bay leaf. Season the stew with salt and pepper as needed. Serve with freshly chopped parsley or chives on top.