Anchorage, we have a Jewish deli, and the pastrami is the real deal 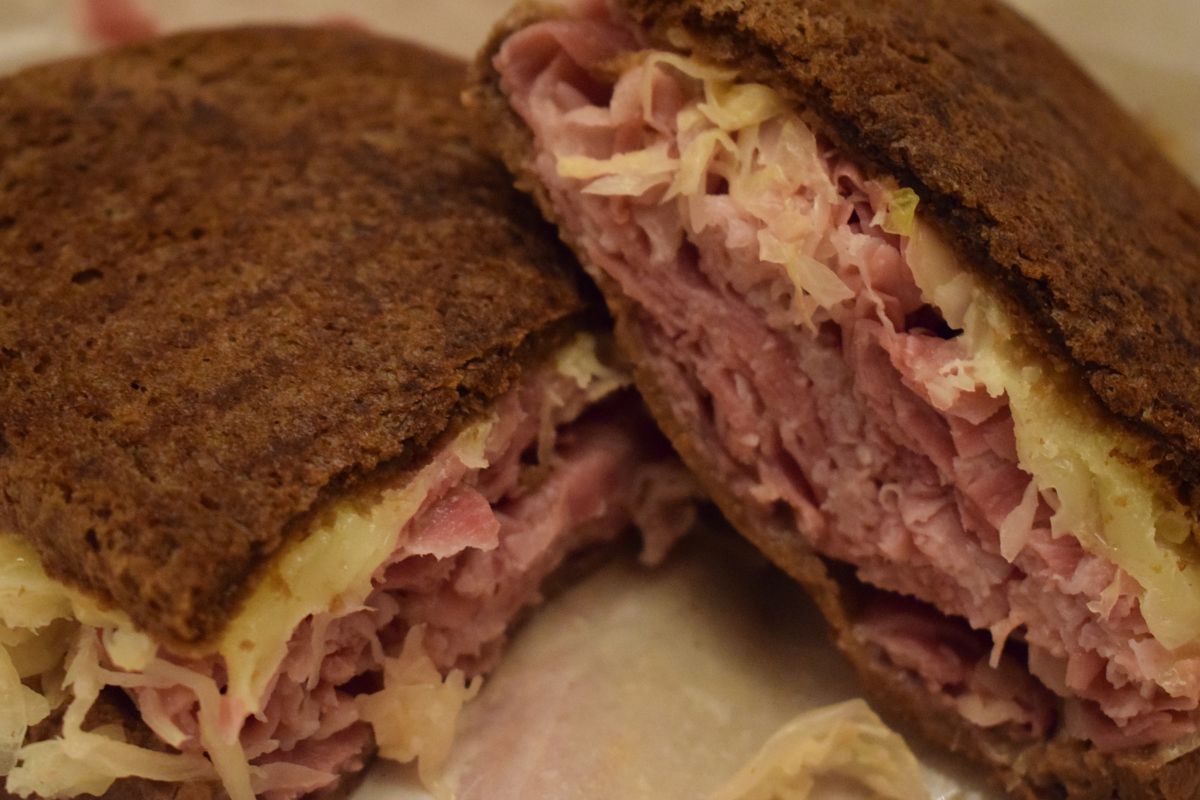 I grew up in North Jersey, where people discuss bagel shops the way Alaskans discuss fishing spots or winter tires – a crucial matter. Jewish delis abounded in and around my hometown and I loved it all: bagels, bialys, lox and capers, crisp, tart, garlicky pickles, and cured, smoky meats. Especially the cured, smoky meats: pastrami, corned beef, smoked brisket. There’s a form of alchemy that happens behind the counter of a truly great deli.

Which brings me to Mo’s Deli. Anchorage’s only Jewish deli, opened by Jason Ellis, who was born and raised in Anchorage but has family roots in Brooklyn, and his wife, Betty Sheldon, a lifelong Alaskan. Mo’s, named for Jason’s grandfather Morris, with its menu of matzo ball soup, chopped liver, scoop salads, and smoked brisket begs the question: What took so long?

The deli itself will not call to mind the time-honored delis of the Brooklyn and Manhattan’s Lower East Side, but instead the many other local restaurants in Anchorage that occupy spaces that were once home to chains. The deli space used to be a Quiznos and, well, it looks like a space that used to be a Quiznos. But it’s clean and bright and pleasant. I was focused on the sandwiches. I ordered a Reuben with corned beef ($14.50), a Rachael with turkey ($14.50), and a pastrami on rye with spicy mustard ($9.50), the ultimate test of a Jewish deli.

Each of these sandwiches was great, transporting me a little closer to my misspent youth on the East Coast. This is in part a matter of meat: Mo’s Deli sources all of their deli meat from legendary Detroit-based United Meat & Deli, founded by Sy Ginsberg, a man who spent eight months perfecting his corned beef recipe. (Not all heroes wear capes.)

The Reuben is served on dark rye with a heap of corned beef, Swiss cheese, sauerkraut and Russian dressing. A Reuben must be balanced – any single ingredient has the power to overwhelm the rest but must not – and this sandwich has balance on lock. Tangy, creamy, smoky and salty notes all sing together in each bite.

The Rachael with turkey comes with Swiss cheese, coleslaw and Russian dressing. When I ordered, I overlooked the fact that it would be served hot. And while it was tasty, next time, I’ll order this sandwich cold.

And now: the pastrami on rye with spicy mustard, made of just two ingredients between two slices of bread, a recipe that gives its maker no room to hide.

This sandwich is perfect. It is briny, smoky, and tender with the exact right amount of buttery, flavorful fat, sliced so thin that it practically melts on the tongue.

A few quick tips: First, the Reuben and Rachael sandwiches are rather juicy so need to be eaten quickly after ordering. The kraut, slaw and dressing can quickly soak the soft bread. The simpler pastrami on rye held up much better as a takeout sandwich.

Second, the pickles that came with the sandwich were almost worth the trip itself -- light, bright, crunchy, garlicky.

Last, my husband brought home two cans of Dr. Brown’s Cel-Ray soda, which he laced with vodka as the beverage of choice for a corned beef-based dinner. And this, reader, is why our marriage works. Pastrami and corned beef brined in Michigan, lovingly assembled into sandwiches in Alaska, and eaten by a sandwich enthusiast to remind her of a childhood in New Jersey.

Good food moves the world closer together, and Mo’s is doing its part one Reuben at a time.