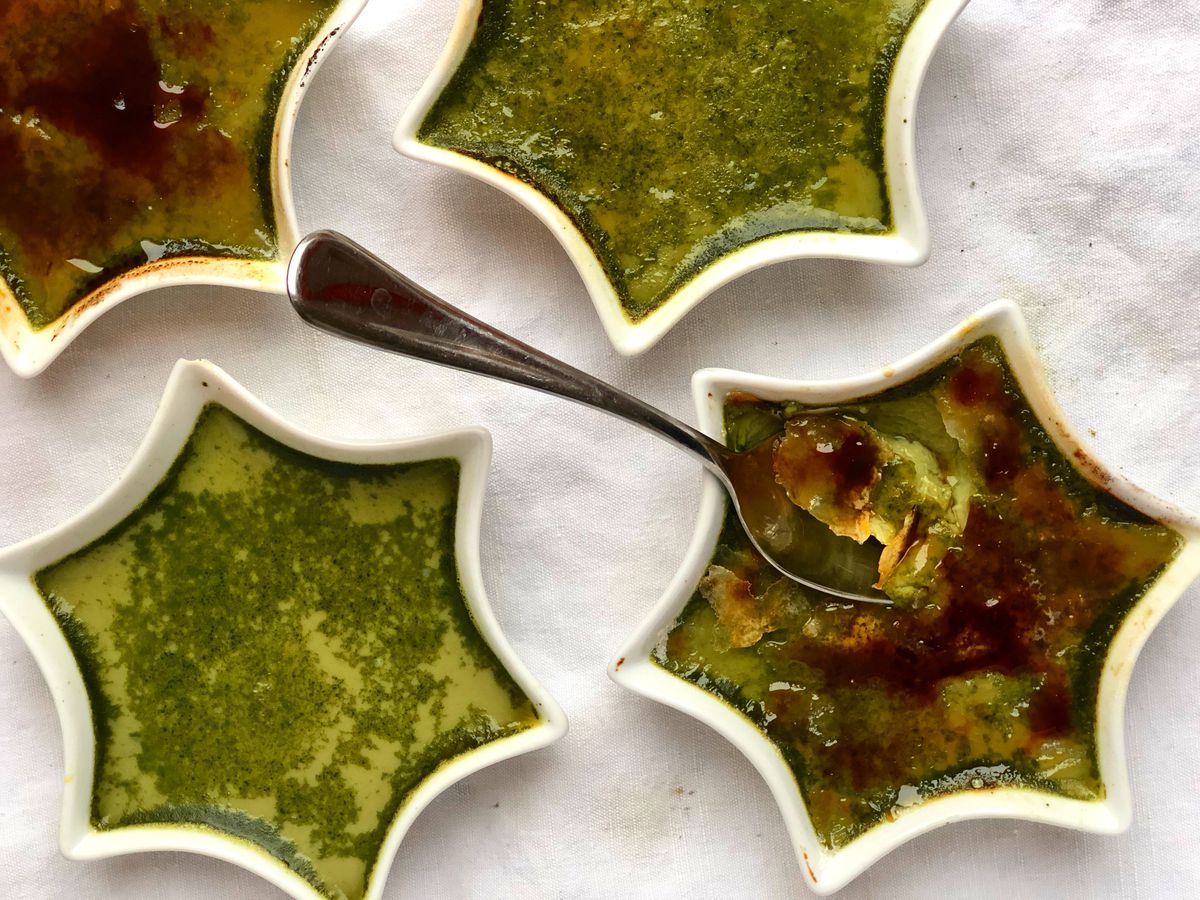 Who among you has accidentally purchased too much of a thing at Costco? I have recently been getting into making matcha lattes. Trendy, I know, but pretty delicious. Matcha, earthy powdered green tea, can be mixed with milk, sweetener and vanilla and and frothed into a nice substitute for coffee. But it’s not cheap stuff. When I saw some at Costco, I thought it would be a great idea. Then, as you do, I got it home and realized I had, like, a lifetime supply. So that’s how I decided to experiment with matcha crème brûlée. If you build in time to chill it and you have the right tools and ingredients, it’s actually pretty easy.

I made mine less rich than traditional crème brûlée, which often calls for cream. Technically, mine is more of a baked custard that uses whole milk. The big secret to smooth texture is to pour it through a fine strainer when you’re filling the ramekins and to bake it in a water bath. I also had to do a lot of experimenting for the crème brûlée top. I tried using the broiler to melt the sugar, but got a much better result using a $20 blowtorch from Lowe’s. The key thing there is to use superfine sugar, because it melts better than regular.

Method: Preheat the oven to 325 degrees. Whisk eggs and yolks, and set aside. Whisk matcha with milk, sugar and vanilla until well combined, then add eggs. Continue whisking until eggs are incorporated. Pour through a fine strainer into six ramekins. Place the ramekins in a rectangular cake pan and fill pan with water until it comes about halfway up the ramekins. Bake for 40 minutes until set. Remove from water bath. Chill for at least an hour before adding caramelized sugar topping.

For the topping: Sprinkle a thin layer (a teaspoon or less depending on your desired sweetness) of superfine sugar over the top of the matcha custard. Using a crème brûlée torch or a small blowtorch with a small flame, melt the sugar, being careful not to burn it. Chill for at least an hour before serving.