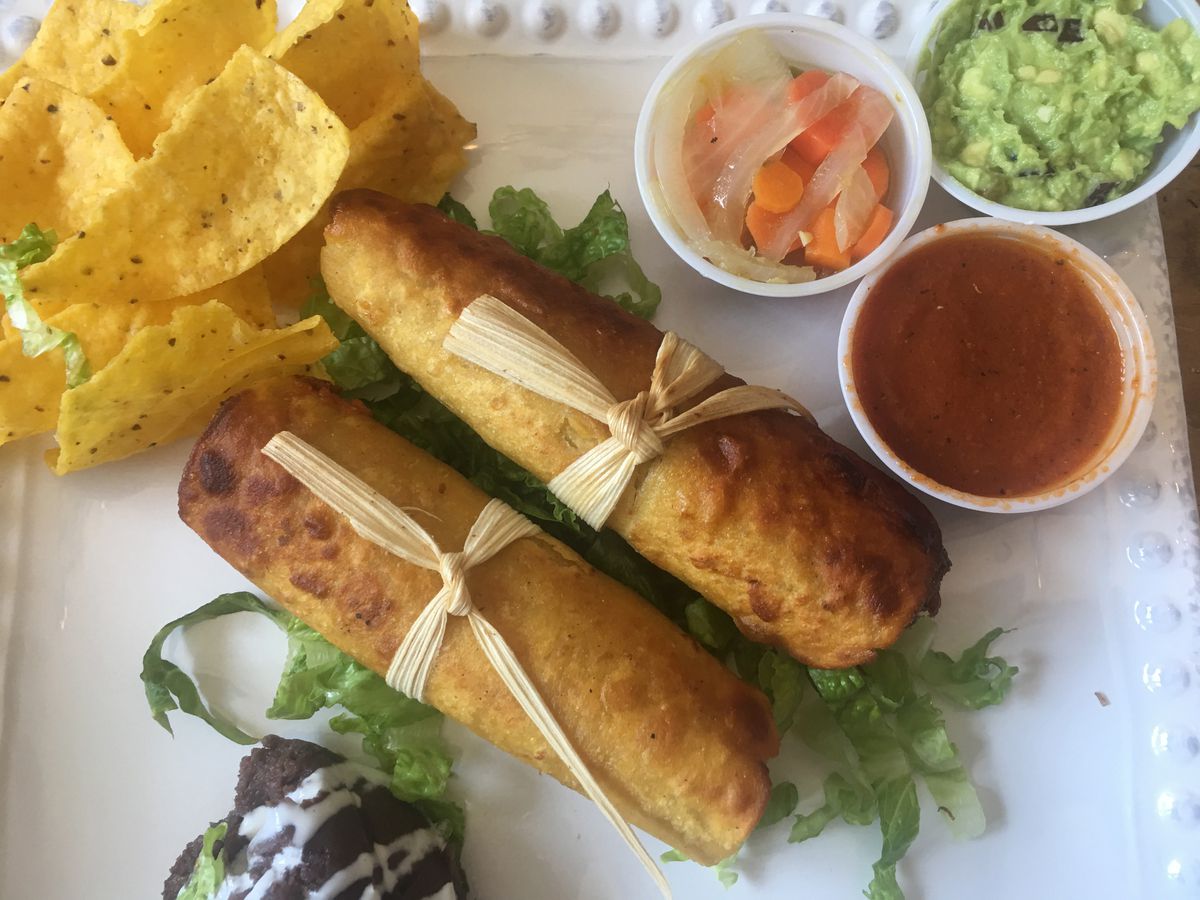 This is an installment of quick bites — an occasional feature that collects small write-ups of surprising forkfuls, unsung eateries and hidden gems on ordinary menus. Believe me, I could happily write a thousand words about a single ice cream cone, a perfect bite of corned beef hash or a beautifully balanced breakfast burrito. But when it comes to food writing, sometimes enough is as good as a feast. Here are three spots in Anchorage worth seeking out.

Mochileros (Spanish for “backpackers”) is a brand new fusion food truck serving self-described “GuateMerican” cuisine. On recent “Taco Tuesdays,” they’ve been occupying the Kitchen at AK Gathering Cafe in South Anchorage as part of the store’s rotating guest-chef program. A friend brought them to my attention, telling me with absolute urgency: “You have to try the pupusas.”

I’m embarrassed now about this glaring gap in my culinary education. And glad to have recently learned what Central American cooks have always known: pupusas are delicious. At least, the ones being served here are. Thick, pillowy cornmeal flatbread is stuffed with cheese (in this case feta and mozzarella) and/or a protein (in this case chicharrons, but you can opt for bacon) and then crisped up on a griddle. Starchy, cheesy, crispy, and salty: these little cakes have big flavor ($10).

I also ordered the day’s special: beef taquitos ($10). These savory little bundles were cooked to a perfect golden brown and – delightfully – tied together with a tiny corn husk bow like a lovely little gift. The shell crackled when I bit into it and the ultra-tender, savory shreds of beef inside, steeped in a rich and flavorful marinade, provided the perfect contrast.

Alongside these dishes was a robust, earthy black bean puree and tortillas with a mild, house-made salsa and ultra-fresh guacamole. But for me, one of the best things on the plate – one of the best things I’ve eaten this year – is the bright and spicy pickled carrot, onion and jalapeno salad that accompanied both dishes. Fiery, fresh, vinegary, and crunchy, the little plastic container packed a massive punch. In fact, I’m hooked. I would buy these by the jarful and serve them with everything.

There are few things I enjoy more than the Spenard Food Truck Festival. In particular, I love the youthful optimism of its mid-March opening day and the Alaska spirit on display by its stubbornly determined diners. In a few weeks the parkas and winter boots will be put away, but in the meantime, stubborn foodies shuffle carefully across the icy parking lot trying to find balance for themselves and their paper plates. Cold hands clutch hot food as strangers sit shoulder to shoulder at picnic tables, ignoring the chill to celebrate good food and conviviality.

My list of reasons for loving the festival is long and on the record, and this year I’m adding Tiki Pete’s Alaskan Grill to it. It’s an Anchorage summer staple but new to the festival and new to me.

It’s a compact little operation. A well-focused menu means that one cook with one grill can turn out hot dogs, Phillies and other sandwiches with a surprising efficiency considering the clown-car proportions of the stand. My daughter opted for a Polish sausage topped with mac and cheese – because mac and cheese ($8). I went for the Alaska reindeer Philly ($10) which is – you guessed it – a reindeer sausage topped with a Philly cheesesteak.

The mac-and-cheese dog is the very definition of truth in advertising. A juicy, high-end dog was heaped with gooey, stringy, buttery noodles that were separately skillet-fried to keep them hot and melty, adding crispy bits to the whole affair. It’s a nice touch; crispy bits are my favorite food.

The Alaska reindeer Philly ($10) is a Frankenstein of a sandwich that roundly rejects the idea that less is more. The reindeer sausage turns out to be the perfect, salty foil for the sweetness of the green peppers and carmelized onions that pervade the Philly cheesesteak. This is an extravagant meal that’s the perfect guilt pleasure. Well, actually, just pleasure (I don’t feel a bit guilty).

I’m not often in East Anchorage, so a small, unassuming spot like Waffle Rush could easily escape my notice. Recently, however, a friend of mine casually mentioned that she loved their chicken and waffles. Casually. Like it was no big deal. Like it wasn’t the topic she should have led with.

It was an odd hour for lunch (3 o’clock or so on a weekday) when I visited, so the modest spot was rather deserted when we arrived. But we were greeted so warmly by the proprietor, who also appeared to be the chief cook and bottle-washer, and we felt quickly at home. We decided to share an order of chicken and waffles ($12) for lunch and a Liege waffle ($8.50) for dessert.

On the chicken and waffles, three generously-sized southern fried chicken tenders were served on a Brussels-style waffle dusted with powdered sugar and accompanied by syrup and a house-made honey mustard. The crisp and flavorful crust on the fried chicken was a deep, appetizing, golden brown. Within, the chicken was perfectly cooked through and still juicy. The waffle was fluffy and buttery, with deep divots to catch the syrup. This was a generous plateful and more than enough to share for lunch. At $12, it was quite a bargain.

The inventive list of Liege waffles ($8.50 each) included flavors like harvest apple pie and the curious George (made with bananas and peanut butter). We opted for the s’mores waffle. A word about Liege waffles: these are unlike their Brussels-style brethren. Made from a thick, bread-like dough, they are studded with pearl sugar, which caramelizes as they cook – giving the waffle a crisper texture and a higher level of sweetness. We watched as the chef carefully molded two balls of waffle dough into the iron and filled them with marshmallow fluff. Once cooked, he spread them with Nutella, a generous heap of whipped cream and a dusting of graham cracker crumbs.

To review this dish, one needs only to list the ingredients. I’ll repeat: waffles, marshmallow, Nutella, graham crackers, whipped cream. It was decadent and a bit childish and made me nostalgic for summers past and hopeful for the one coming up.