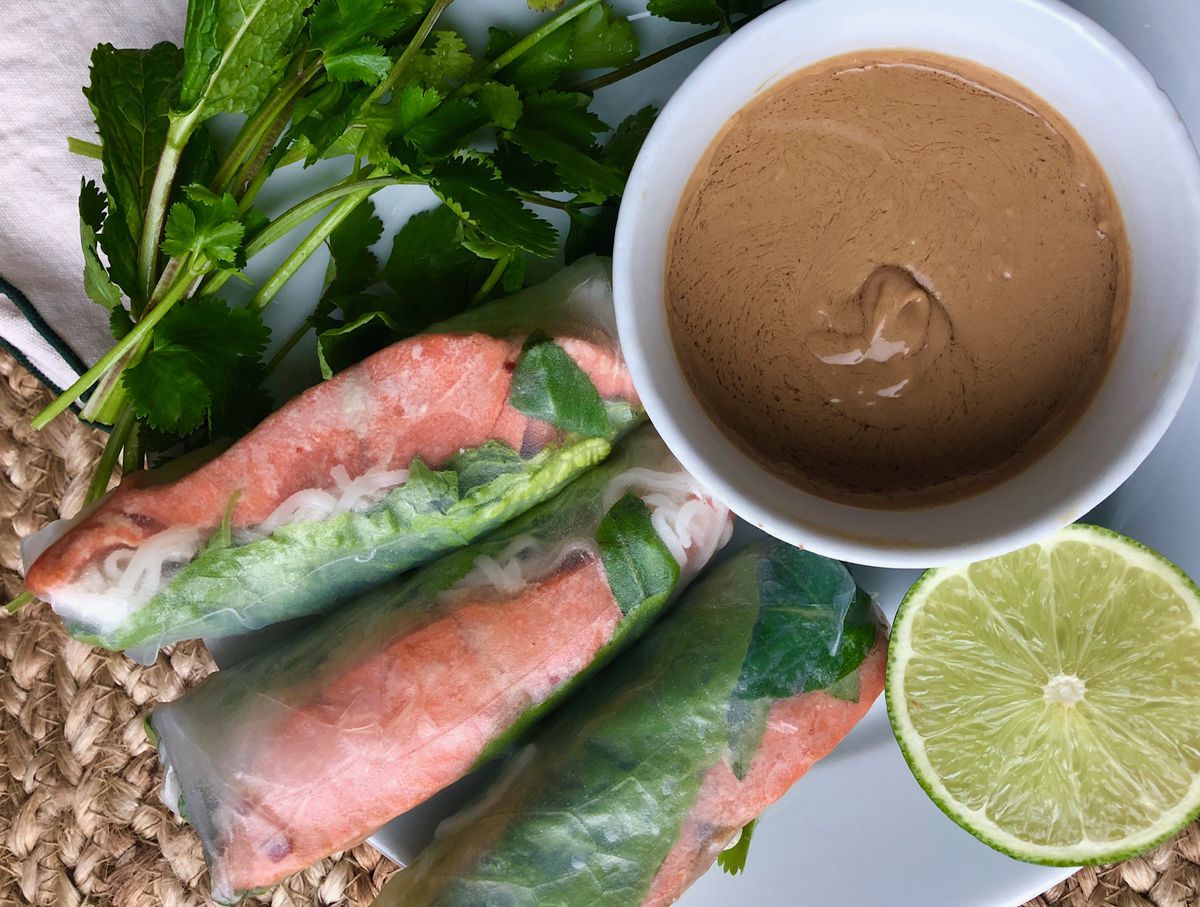 This recipe is so super Anchorage. For one thing, it uses frozen salmon, which so many of us are trying to get rid of right about now. And the rolls are inspired by my favorite, super herbaceous takeout spring rolls from Thai Kitchen. And they use Thai basil, a spicier type of basil used in Southeast Asian cooking, which you can find now locally grown at Sagaya markets from the hydroponic urban farms of Alaska Sprouts. You can also often find non-local Thai basil, spring roll wrappers and rice noodles at most Asian groceries.

With this recipe, you get extra sweet chili marinade that doubles as a dipping sauce. You can also use store-bought sweet chili sauce or tangier nuoc cham that usually has fish sauce as one of the ingredients. I like peanut sauce, though, and it’s easy to make, so I usually whip some up to go with the rolls or use a store-bought version. The hardest part is getting the hang of rolling them. It’s similar to rolling a tight burrito, but I suggest watching a couple of YouTube videos before you try it. The rolls are best eaten within a few hours of rolling.

Method: Slice the salmon fillet like a loaf of bread, holding your knife perpendicular to the top of the fish, in 1/4-inch to 1/2-inch slices, roughly an ounce apiece. Combine syrup, water, lime juice, vinegar, salt, corn starch, garlic and red pepper flakes in a small saucepan. Whisk over medium heat until the mixture boils and begins to thicken. Cool to room temperature, then pour half over the salmon and marinate at least an hour. Reserve the other half for dipping sauce. About 45 minutes before your meal, set the oven on broil. Remove the fish pieces from the marinade and lay them on a parchment-covered sheet pan. Broil for 3 minutes. The salmon should be shiny with a caramelized glaze and cooked through. Allow to cool.

To make the rolls, cook the noodles according to the package directions. Drain them, rinse them with cool water, lay them on a plate in your work space and gently comb with your fingers while they are wet so they lay straight. Set up your roll assembly area. Clean herbs and set them at the ready. Clean the romaine and remove the leaves, making a pile of the smaller internal leaves and removing the spines and bases from the larger leaves. Tear the larger leaves into roughly 5-inch-long pieces. Fill a large bowl with hot water and place it near your work space. To assemble, dip one rice wrapper in the hot water and place it on a clean plate. In the center of the wrapper, place a 5-inch-long piece of romaine, a piece of salmon, three mint leaves, three or four basil leaves, three cilantro stems and a portion of noodles that is about 5 inches long and roughly the diameter of a piece of sidewalk chalk. (The filling ingredients should be oriented vertically; scissors work well when portioning noodles.) Working quickly, fold the top and bottom of the wrapper in tightly. Then fold one side of the wrapper over the noodles, greens and fish, and roll it tightly toward the other side like a burrito. The wrapper will be delicate and sticky. It helps to keep your fingers and the plate damp. As you finish wrapping the rolls, add them to a plate and keep them covered with plastic wrap until ready to serve.