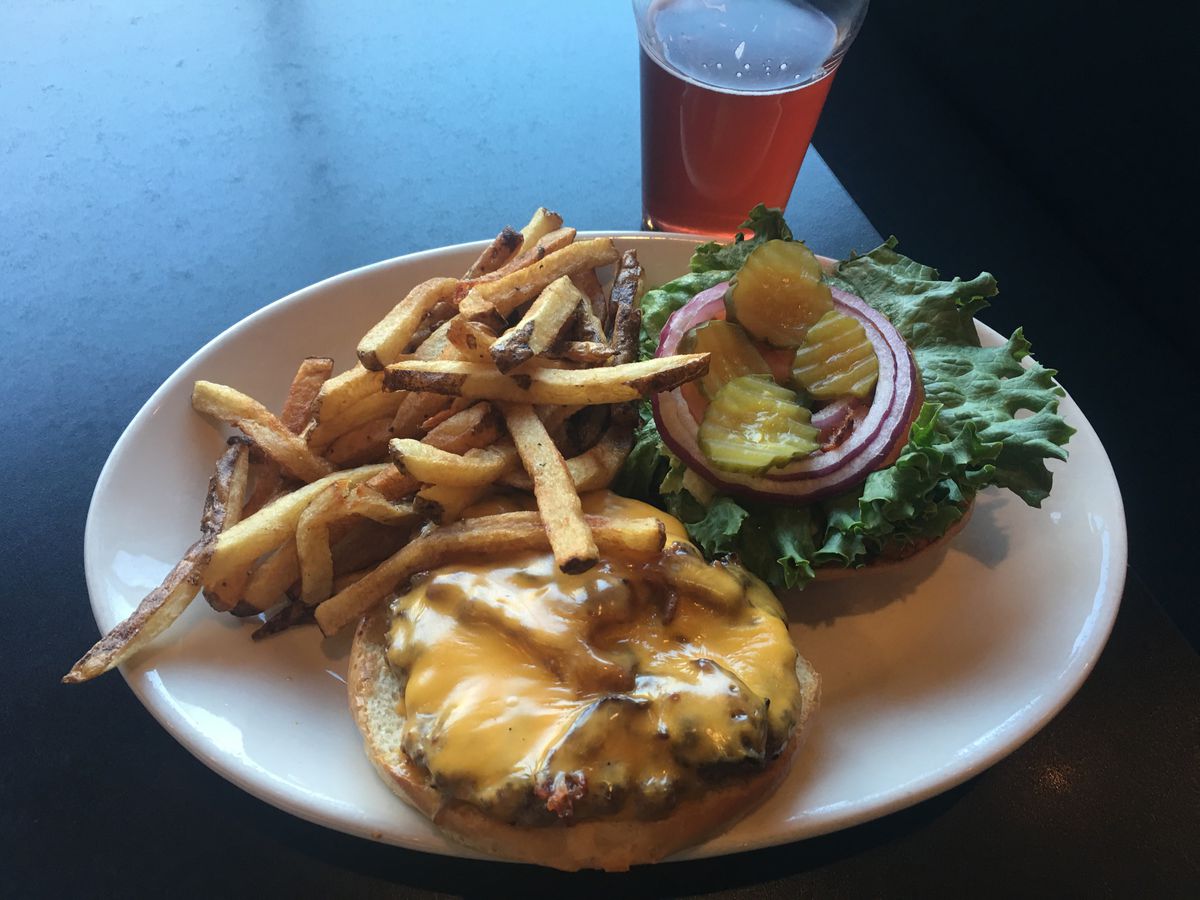 The Matanuska Brewing Company Anchorage (formerly the Anchorage Alehouse) is a far cry from Airport Pizza, owner Matt Tomter’s first dining venture. That iconic Alaska eatery, based in Nome, famously flew pizzas out to hungry diners in remote Alaska outposts. The new Midtown restaurant is part of a growing family of pubs serving their own beer, which is brewed at the former Matanuska Maid Creamery in Palmer. Part sports bar, part burger joint, part pizzeria and part burgeoning music venue, the Matanuska Brewing Company is attempting to cover a lot of bases. Instead of providing pizza for a geographically challenged few, the restaurant strives to provide something for everyone.

This makes for an interesting and dynamic spot, but also one that occasionally seems to be spreading itself too thin.

[Like to cook Alaska recipes and read about restaurants? Don’t miss a story! Get our food newsletter delivered to your inbox every Friday: Sign up here]

The space is clean and contemporary, with a warm color palate, surprisingly elegant beer-centric artwork, and a few whimsical touches (I love the stack of weathered kegs behind the main stage and the vintage payphone in the arctic entry). But despite the major overhaul, there lingers the ghost of chain-restaurants past. Currently, it lacks the patina that makes a restaurant feel lived-in and welcoming. To put it another way, it still has that new-car smell. After being seated and orienting ourselves, I mused to my daughter that it felt a bit like an airport bar. “But your favorite airport bar,” my daughter said, which sums it up nicely.

The menu offers your standard pub fare – burgers, tacos, pizza, and salads – with a few outliers like Pork Belly Burnt Ends ($13) and roasted Brussels sprouts ($10) with a poached egg and hollandaise sauce which, of course, we had to order. To follow, I opted for a classic Caesar salad ($10), and my daughter went for a basic bacon cheeseburger ($15).

In the dining room (we were seated on the bar side), guitarist/vocalist Pierre Bidondo was affably entertaining the crowd with some low-key rock standards (think the Eagles) and managing to be engaging without being intrusive, a difficult needle to thread. The bar routinely books dinner-hour acoustic entertainment, so look for acts like Jared Woods, Ken Peltier, and Steven Bacon if you enjoy a little song with your stout.

The meal started promisingly. The pork belly burnt ends were an unequivocal hit. The pork was crispy in spots and tender in others with a mellow, buttery flavor. The meat was smothered in a sweet, smoky barbecue sauce with just enough kick to make it lively, but not so much that it masked the subtle flavor of the pork. Heaped on top were crispy threads of sweet onions, which I would eat by the basketful.

The roasted Brussels sprouts were also a winner and a rather elegant take on bar food. The sprouts were charred perfectly, giving them an assertive flavor that provided contrast to the creamy hollandaise sauce. The yolks from the poached eggs added richness to the sauce and turned this “vegetable” dish into a decadent indulgence.

Then the meal went a little pear-shaped.

The salad was, basically, a non-entity. A good Caesar salad is tangy, garlicky, rich with emulsified egg yolk, and savory with umami kick from the anchovy. This was not that. The dressing was bland, and the shredded Parmesan didn’t taste or look freshly grated as described on the menu.

My daughter’s burger looked great, generously blanketed as it was in melted cheese. Unfortunately, that’s where it ended. The patty was under-seasoned and there was something strange about the texture – a graininess to the grind that I found off-putting. Anchorage has such an excellent burger scene that you never have to eat an imperfect one. Next time we’ll stick to the pork belly.

I returned on my own a few days later and was greeted at the entrance by a tank of morose-looking but impressive live crab. This provided either a whimsical touch or a macabre one, depending on your point of view. I hunkered down at the bar with a magazine, an appetite, and an open mind. Most patrons were following a hockey game on the TVs behind the bar and there was a musical duo (the energetic Duane & Tyrone) in the dining room competing for attention. It was a friendly crowd and I was in the right state of mind to enjoy the mash-up of Journey songs, occasional outbursts over a hockey call, and overhead snippets of conversation. My out-of-date copy of The New Yorker didn’t stand a chance.

I ordered the French onion soup ($10) and the prime rib tacos (two for $11) for a fully international experience. The tacos were well done — fresh, flavorful and generously packed with tender beef and tasty fixings.

But I want to talk about the soup. It needs an editor. There is so much cheese melted over-top and so much bread in the broth that there was hardly any soup in the soup.

I never in my life thought I’d use the phrase “too much cheese,” but it has to be said. It was the textbook example of too much of a good thing. Which is a shame because the sweet oniony broth (and the threads of soft, sweet onions) was exceptional. I wanted more of it.

The missteps in the kitchen seem easily fixed. There’s an unusual pattern: They get the hard stuff right (rich soup stock, a light well-balanced hollandaise, perfectly prepared pork belly) and let themselves down with the details (bland salad dressing, an overabundance of cheese, under seasoned burger patties). Which, I think, is a much better problem to have than the opposite.

There is a lot to like about Matanuska Brewing Company Anchorage: friendly service, a lively atmosphere, and a few really winning dishes. And I haven’t even mentioned the beer. Over two visits I tried the Hazy Days IPA, the Backcountry Blue (berry), and the citrusy Magnitude 9.2 and they were all fantastic — complicated, nuanced and satisfying. And look for an impressive lineup of musical acts in the coming months when bands like Young Dubliners, Great American Taxi and Blackwater Railroad Company set to hit their stage in the next few weeks.

I’m always glad to see a national chain get shouldered out by a local business. And Matanuska Brewing Company’s commitment to the community with its focus on local food, beer, and talent means I’ll be rooting for this growing presence in the Anchorage dining scene. But, civic-mindedness aside, I’ll admit it: they had me at pork belly burnt ends and blueberry beer.