Raising Cane’s lives up to all the chicken-finger hype 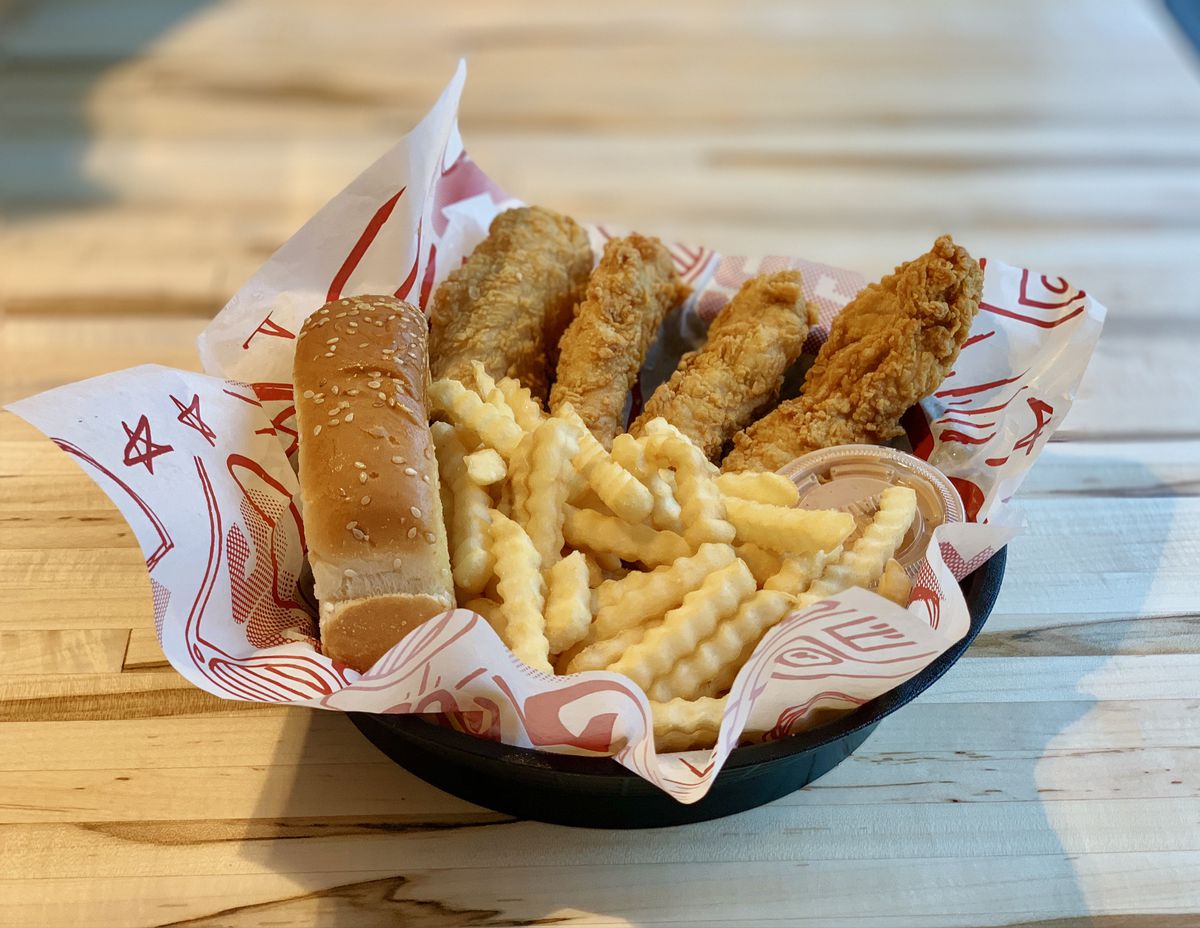 Anchorage’s Raising Cane’s Chicken Fingers restaurant has been generating buzz since September, when news broke of its arrival. Once its doors opened, the restaurant and drive-thru were flooded with customers, many of whom shared photos of the fried chicken on social media.

Fellow chicken fanatics rejoice: Raising Cane’s does in fact live up to the hype.

Raising Cane’s was founded in 1996 in Baton Rouge, Louisiana, by Todd Graves, a former commercial salmon fisherman in Alaska. Almost named “Sockeye’s Chicken Fingers” after Graves’ fishing roots, Cane’s was a major hit in the South before making its westward expansion — opening more than 430 restaurants in 26 states over the past two decades. On March 19, Cane’s made its Alaska debut in the Tikahtnu Commons.

The Louisiana-based chain boasts a menu with really only two items: chicken tender combos and a chicken sandwich that I have never seen anyone order in my six years of eating Raising Cane’s Outside.

The prices are noticeably higher than offerings from fast-food giants like McDonald’s or Kentucky Fried Chicken, but with the price hike comes superior quality chicken.

Chicken strips and tenders can often dry out and become devoid of any natural chicken flavor. However, Cane’s separates itself from the pack by only using chicken tenderloins — a smaller yet moister cut attached to the chicken breast — allowing for its natural tenderness to shine through. The fingers are paired with Cane’s signature sauce, which is more or less a tangy mayo-ketchup mixture.

While slightly smaller than strips or tenders offered at other fast-food restaurants, Cane’s makes up for a lack of volume with unparalleled juiciness, unlike larger, batter-heavy strips from Carrs or crispier, drier strips from KFC.

Cane’s dishes out four varying-sized combo meals: The 3 finger, box, Caniac and a kids combo. With the exception of the kids combo, each combo comes with tenders, crinkle-cut fries, coleslaw, their signature Cane’s sauce and Texas toast.

Cane’s fries are exactly like any crinkle-cut fry one would find at Outside chains Shake Shack or White Castle and the coleslaw can be seen as glorified garnish.

Cane’s Texas toast, however, is a signature item. According to their website, their Texas toast is cooked to order from sesame seeded pull-apart bread. It’s brushed with garlic butter and grilled on a flat top "to create its toasty buttery deliciousness.”

Keeping up with the theme of the South, Cane’s also offers sweet and unsweetened tea and lemonade, which I’ve witnessed people purchase by the gallon.

Food aside, when the Anchorage location opened, there was a glaring problem: price. Box combos were $11.70 and Caniac combos (five tenders) were $17.50 -- nearly double what they cost in Nevada, where the next-nearest Cane’s location is.

After public outcry on social media, however, Cane’s founders who were in Alaska at the time said they would work on lowering Alaska prices, according to a national customer service representative.

On an updated menu, effective April 4, all menu items saw a slight decrease in price. The Caniac combos now sit at a more reasonable $14.99, for the generous amount of food, while box combos dropped to $9.99.

It’s still a tad high relative to other tenders in town, but Cane’s chicken is superior.

There will always be cynics regarding who reigns supreme in Anchorage’s chicken kingdom, but I firmly assert that Raising Cane’s makes a strong and juicy claim to the throne.