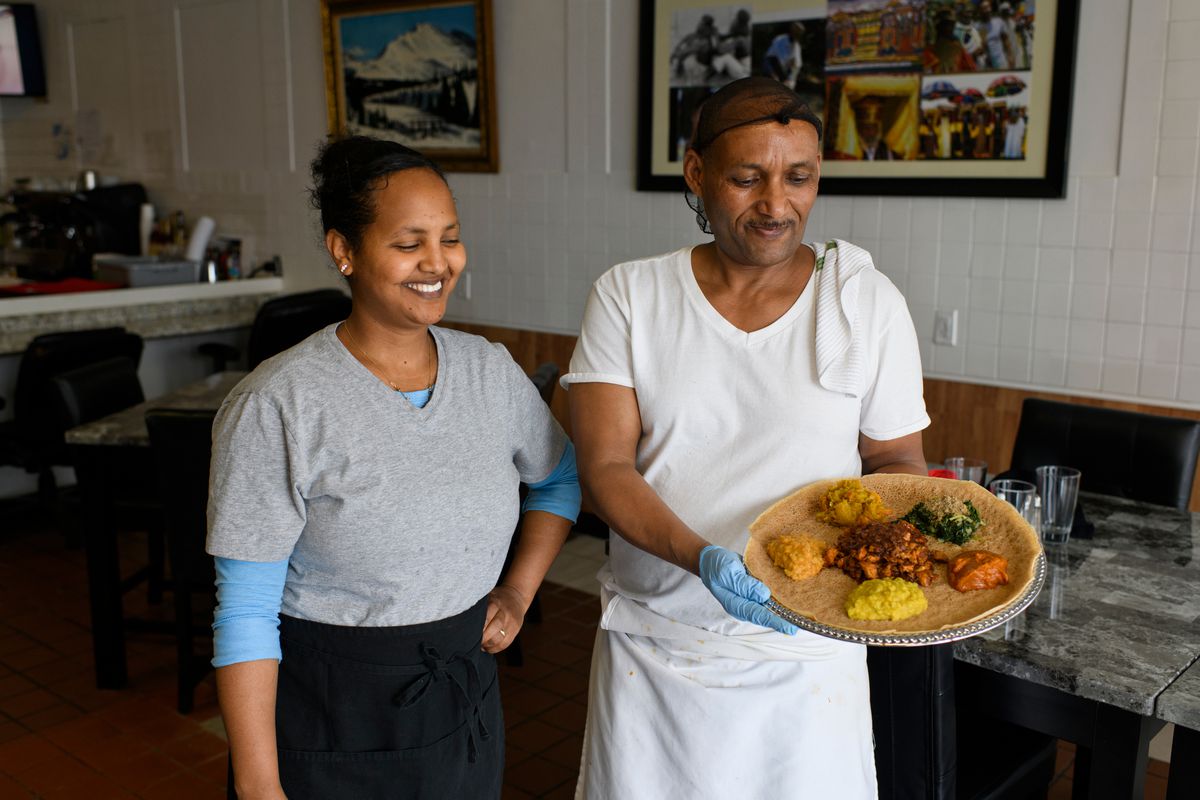 Most New Yorkers are restaurant fanatics if only because their home kitchens are so tiny. So when my husband and I arrived in Anchorage from there twenty years ago, we were worried about the food scene. Where would we go for pho, pad Thai and late-night falafel? Of course, we needn’t have worried. Our new home was also home to diverse and vibrant restaurants serving up everything from the fish and chips we expected to the bibimbap we didn’t.

Since then, the international flavor of our city has only gotten richer. We not only have bibimbap, we have arguments about where to find the best bibimbap. And while the culinary map of Anchorage still maintains some blank spots, I’m happy to report on one that has just been filled with the opening of Queen of Sheba, what as far as I can tell is Alaska’s first and only brick-and-mortar Ethiopian restaurant.

Ethiopian food is a friendly cuisine. Traditionally the food is served family style, on a blanket of moist, bubbly, sourdough injera bread and eaten with the hands — using the thin bread to transport the food from the platter to your mouth.

“The Europeans have silverware and Asians have chopsticks, but we stick to the old tradition,” said Dawit Ogbamichael, who operates the restaurant with his wife, Samrawit Haile.

Forks are available to diners who prefer to go “new-school," he said. While it’s an old tradition, it might be new to some Alaska diners.

“They’re getting used to it,” he said, laughing.

Ogbamichael and Haile are originally from Ethiopia but have been in Alaska for 15 years, by way of Minnesota. Until recently, they worked at Hotel Captain Cook, garnering experience in maintenance and hospitality.

Guests and co-workers would frequently ask about their accents and would follow up with the magic question: Where is the Ethiopian food in Anchorage? They were asked the question often enough, Ogbamichael said, that they decided to answer it themselves. And that answer was the Queen of Sheba.

Walking into the restaurant is like walking into a wall of spice. On my first visit with my daughter, we were hungry when we pulled into the parking lot but absolutely ravenous by the time we picked up our menus. “It smells so good in here,” she said. “But I don’t know what I’m smelling.”

My daughter is a newly minted vegetarian and was excited to see so many veggie-forward dishes. For her, we ordered shiro ($15), a spiced chickpea spread and gomen ($15), a dish of collard greens and spinach cooked with onions and garlic. To satisfy my stubborn inner carnivore, we also ordered awaze tibs ($19), a sautéed beef dish with garlic, tomato, jalapeno, and berbere spice. For the uninitiated, berbere is a complex spice blend made up of chilies, coriander, paprika, fenugreek, cinnamon, paprika and ginger, among others.

When the platter arrives, with mounds of food artfully arranged atop the thin, bubbly sheet of injera, it looks like a painter’s palette. Berbere spice transforms the bland beige of chickpeas into a rich, appetizing shade of pumpkin. The collards are a vibrant green and the contrast between the two dishes is striking.

My daughter was a bit skeptical at first but she quickly fell in love with the tangy, springy injera and was soon scooping up a bit of the bright but not too fiery shiro before digging into the greens. “This,” she declared, “is a fun way to eat.”

On another visit, my friend Sue and I shared yegeb tibs ($20) — a beautifully spiced lamb dish sautéed with onions and garlic. We also finished the tour of the menu’s vegetarian dishes, opting for red lentils (called yemisir key $14), stewed yellow lentils ($14) and a dish called yatakilt alicha ($15), a slow-cooked potato dish with cabbage, carrots, and seasoned with ginger and turmeric.

A note about the vegetarian offerings: Shortly after opening, Ogbamichael was discussing the dishes with a customer — exactingly describing the ingredients (all natural, no dairy no eggs) — who then pointed out that the vegetarian dishes were also vegan.

“I didn’t even know that!” Ogbamichael said.

That customer shared the news with his vegan club and word is spreading about a place with a variety of dishes that are short on animal products and long on flavor.

I like the ratio of one meat dish for several vegetarian ones. It makes the meal feel balanced, nourishing and satisfying without being heavy. But there’s no wrong way to combine dishes. Individually and in concert, the dishes flavor profiles are all in perfect harmony. At the end of our meals, Haile expertly folded our leftovers up, making a perfect little cocoon of injera-wrapped flavor. Later, my husband sliced it in half and ate it burrito style, a method of which I highly approve — after all, he was still eating with his hands.

I’ll admit to being a little late to this party. Multiple friends and readers have contacted me to make sure the restaurant is on my radar.

“The people of Anchorage have been so supportive,” says Ogbamichael.

There’s the regular customer who jokes that when the turmeric stains fade from her fingers, it’s time for a visit. And then there’s the man from Chicken who developed a taste for the cuisine while based in Eritrea with the military. He flew into Anchorage by small plane recently specifically to satisfy his long-unsatisfied craving.

But their favorite story involves a customer who came to their rescue when they realized their dough maker (essential for the injera) wasn’t properly installed. “I thought we would have to close,” says Ogbamichael. A stranger, overhearing their plight, offered his family’s own and the doors stayed open. Of course, he’s no longer a stranger. In fact, his family’s Christmas card sits on a shelf in the restaurant’s dining room.

“They’re more than family to us,” Ogbamichael said.

Queen of Sheba has been open for almost a year and the couple is getting ready to expand their offerings.

“People have been asking for Ethiopian coffee," Ogbamichael said, pointing to the industrial espresso machine that will begin hissing when the restaurant begins a breakfast service later this spring (in the meantime, try their honey-sweetened tea — it’s perfect).

The Ethiopian style of dining, more intimate than our Western idea of family style, draws people together says the couple. Family and friends orbit around the platter. I personally cannot resist the gravitational pull of this spicy, savory, soulful food. And I wouldn’t want to have that kind of strength.