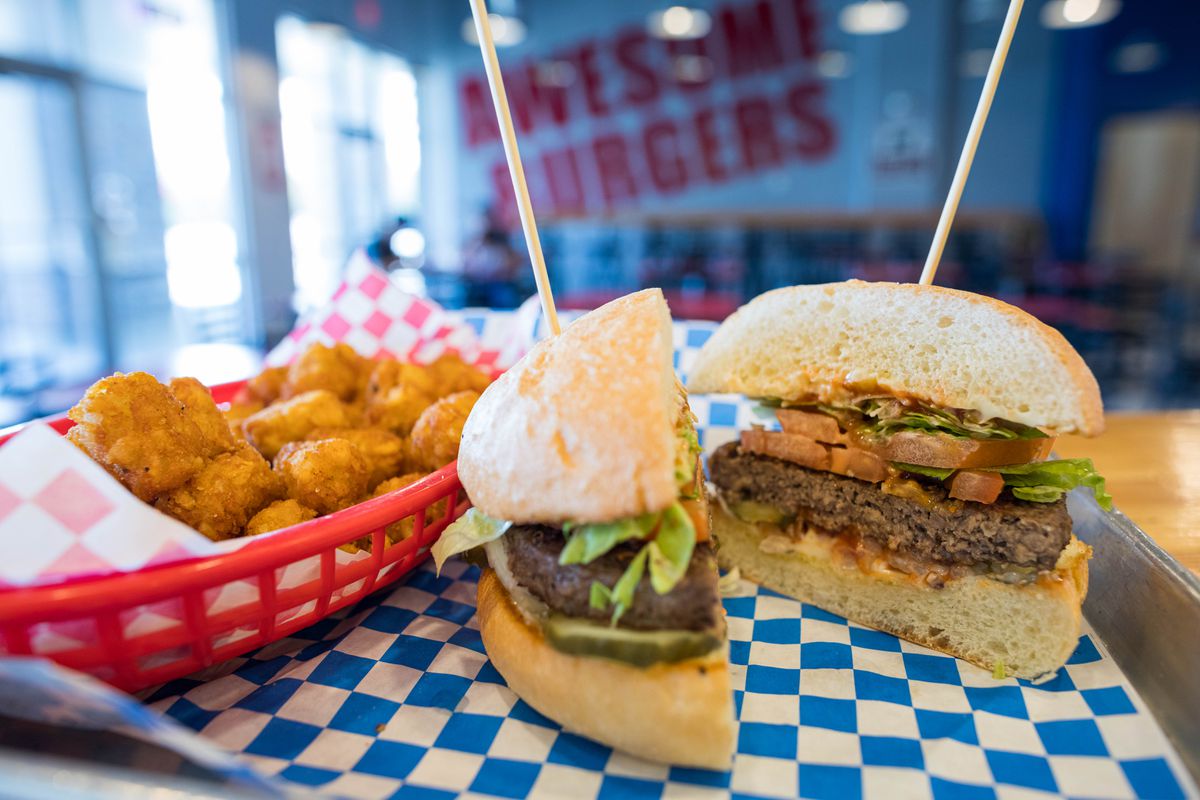 Kriner’s Burgers & Pies in Anchorage started serving a new meatless burger this year. But some customers can’t quite believe it.

Some who have ordered the Impossible Burger have sent it back to the kitchen because they thought it was real beef. Surely there must have been a mistake.

“That has happened several times," said owner Drew Kriner. “I’m like, ‘I promise you it’s an Impossible Burger.’”

That’s one of two plant-based burgers making waves across the U.S. for what some say is a surprising likeness to real beef that makes it far superior to its drier, less convincing veggie burger predecessors. Now, the Impossible Burger and its main competitor, the Beyond Burger, are popping up in restaurants around Anchorage, where hunters abound and people fill home chest freezers with Alaska game meat and fish.

Bear Tooth Grill in Spenard serves plenty of meat but also has a dedicated vegan clientele, said general manager Stephanie Johnson. Sandwiches have always been trickier to develop vegan options for, so management keeps an eye out for new ideas.

One of the Bear Tooth owners recently returned from a trip where he had eaten both the Impossible and Beyond burgers, and wanted to test one on the menu.

The restaurant started running specials featuring the Impossible Burger in January. There was enough customer interest to make it a permanent item — $19 for a vegan burger made with an Impossible patty, or $3 to substitute it for meat on other burgers.

It was "pretty immediately clear” that it was a good option to have, Johnson said.

“This isn’t something just for vegan people," Johnson said. “There’s also this demographic of people who love a good classic burger but don’t want to be eating too much red meat. ... I was surprised at how many meat eaters wanted a meat replacement option.”

In fact, carnivores are the main demographic Impossible Foods — the California-based company that makes the burger — is targeting, said company spokeswoman Jessica Appelgren. That’s also why the company describes its product as “plant-based” instead of “vegan,” even though it qualifies as such.

“Plant-based is just a very factual term," Appelgren said. “Vegan usually is a term that’s almost about a stance. Whether it’s because you are for animal rights or some other political reason, you may call yourself a vegan, and that’s great. But our target market is not a vegan. Our target market is the hardcore meat eater.”

What’s in a plant-based burger?

You can order a Beyond Burger at BurgerFi in the Midtown Mall. Down the street, you can find Beyond Burger patties ready-to-cook on the shelf at Fred Meyer — a package of two for $4.99 — right alongside ground beef and steaks. South Restaurant, Spenard Roadhouse and 49th State Brewing Co. are just a few Anchorage restaurants that list the Impossible Burger on their menus.

So what exactly are they made of?

“It looks like it bleeds," said Kriner. “It’s really strange.”

He was at a local food wholesaler when he saw a pamphlet about the Impossible Burger. He decided to try it out at his Mountain View restaurant.

The Impossible isn’t even listed on the menu that hangs on the wall. But people see it on social media and order it when they stop in. He sells it for $13.99, compared to $8.49 for a typical burger.

From mid-May to mid-June, Bear Tooth sold 30 to 40 of its standard burgers daily and 10 to 12 Impossible Burgers. The higher price point may keep potential consumers away.

“It seems like for most people that are interested, the reason they’re interested is important enough that the added cost doesn’t seem to be dissuading,” Johnson said. “But it could be a barrier to checking it out if you’re mildly curious.”

The Beyond and Impossible burgers are easier for restaurants to serve than recipes they might come up with on their own, she said. Bear Tooth has served black bean burgers and veggie burgers many times.

“There’s always been a great response to them,” Johnson said. “But on the back end, making a good house-made veggie patty, it’s a lot of effort and there’s a lot of variability.”

Both the Beyond and Impossible burgers have been growing in popularity in the Lower 48 as health- and climate-conscious consumers seek to curb their meat consumption. Beyond is sold in restaurants and grocery stores, and the Impossible burger is set to have its grocery store debut in the U.S. later in 2019.

Beyond Meat, the company behind the burger of the same name, went public in early May and has had one of the best stock debuts of the year.

The meat industry has taken note. Farm and beef industry groups have been pushing for laws around the country that would prohibit use of the word “meat" on such meatless products, The New York Times reported.

“I was met with resistance here,” he said. He called up local businesses and told them, “‘This is a no-brainer, this is going to sell like hot cakes.’" He sees the new option as more of a straightforward replacement for meat than a black bean patty that can’t quite convince a customer it’s a burger substitute. That’s because, to most people, the Impossible looks and tastes more like real meat, he said.

“Now, almost everybody is selling it,” Linford said.

So many places are selling the Impossible Burger that Impossible Foods is having trouble keeping up. That’s in part because the company released a new version of their burger at the start of this year, and in part because Burger King started serving it at some locations in April, Appelgren said.

That “made our demand skyrocket overnight,” she said. “It was pretty overwhelming. Where we were planning for success, it was more than we anticipated.”

The company is hiring more employees and working to get supply back to normal in a few weeks, she said.

Bear Tooth expects to run out of the Impossible Burger this week, Johnson said, and the restaurant is trying to get it back in stock as soon as supply will allow.

At Kriner’s Burgers on a recent Friday, Drew Kriner cooked up one of his last two Impossible Burgers. He had received notice from Impossible Foods about the supply crunch, along with information to give customers in case he sells out before he can get more.

As the patty heated on the grill, red liquid seeped out the top as it turned from pink to brown. Kriner sprinkled on spices, then put it on a bun along with all the toppings you’d have on a beef burger.

It’s great to be able to have an option for everyone, said Kriner, but the Impossible still sells way less than beef at his restaurant.

“A hamburger’s always gonna win at the end of the day,” he said.