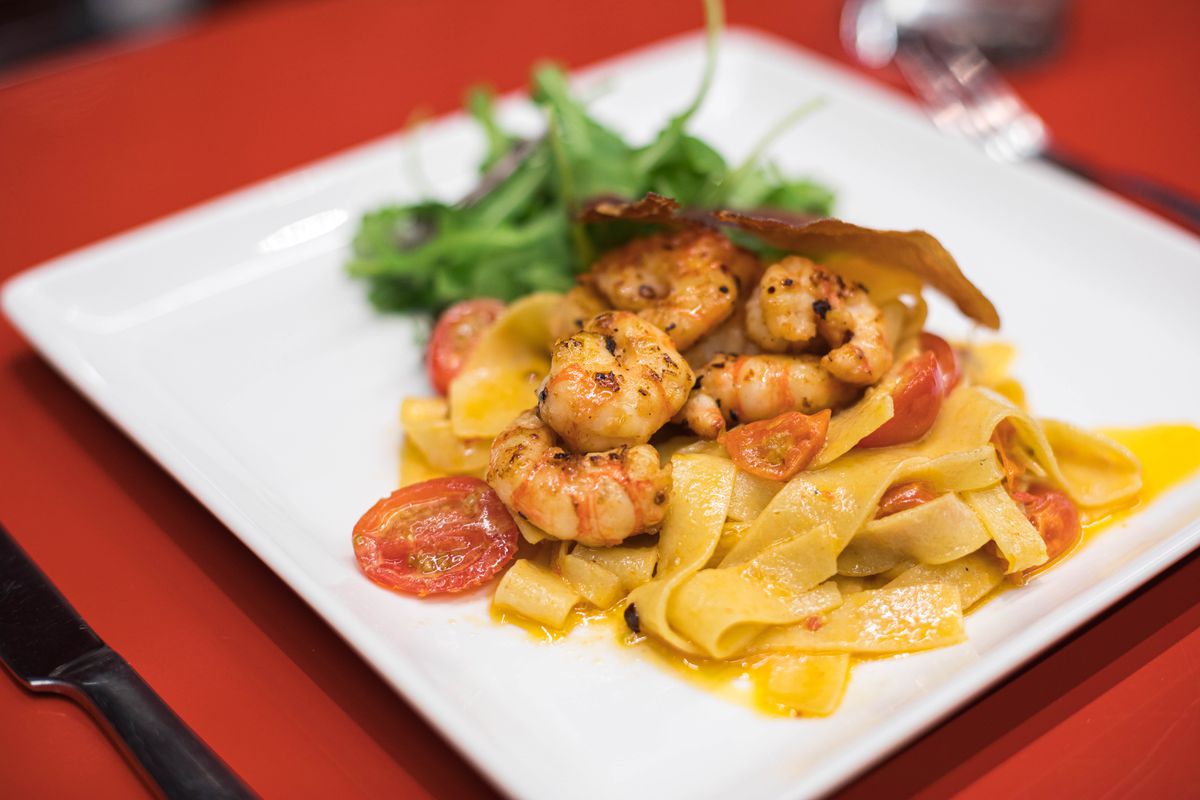 While I have always had a fond spot for Muse, the playfully chic dining space in the Anchorage Museum at Rasmuson Center, it has been some time since I found myself recommending it with confidence. Despite a location that is both tourist- and locals-friendly, the spot has had its ups and downs over years of semi-regular management and menu overhauls. In short, Muse has never seemed to hit its stride for very long. So I had high hopes when I learned that Laura Cole, of 229 Parks Restaurant and Tavern near Denali National Park and Preserve, was primed to take over the kitchen and bring her uniquely Alaskan vision to the often foundering space.

I got my first taste of the restaurant’s new iteration on a recent First Friday when I treated myself to a little dinner before a performance in the museum’s atrium. It’s a capricious menu, changing often with the availability of local and seasonal ingredients, so I unhesitatingly ordered the artichoke soup ($9). I’m always delighted at seeing artichokes featured on local menus because my love for artichokes is exactly proportional to my dislike for preparing them.

Because artichokes are such a woody, earthy ingredient, I worried that I was making a heavy choice for a warm summer evening, so I balanced my starter with a pint of cold, dry cider from Alaska Cider Works because … science? But I needn’t have worried. This soup is so cleverly conceived — light and bright and pleasantly grassy — it tasted as if it had come to my table by way of the garden. A generous drizzle of lemon oil made the bowl fresh and fragrant, and a small heap of deep red tendrils of micro-greens (called “bull’s blood” according to the server) floated on top and did the two-part job of adding texture and slowly turning the soup into a lovely shade of rose. This transformation of the dish as you eat it feels like a metaphor for the a la minute nature of truly seasonal cooking. Apologies for waxing poetic; artichokes do that to me.

For my entrée, I opted for the spicy spot prawn pasta ($20) with house-made lemon-infused semolina pasta, greens and prosciutto in a lobster broth vodka cream sauce. It’s one of the best dishes I’ve had all year. The shrimp are plump and sweet inside with a perfect smoky char on the outside. The lobster broth is rich and flavorful but not heavy. Crisp little shards of prosciutto add salt and texture. It’s a stunning, comforting dish and I hope it will stay on the menu long enough for a return visit.

I returned the following week for a late lunch with my daughter. She, a recent vegetarian, wanted the Picnic Salad ($14) which comes with greens dressed in a house made ranch sauce, apple matchsticks, crisped prosciutto, a chicken skin chip and a fried egg on top. We asked them to hold the prosciutto – to my lasting regret. This is a nice dish but the prosciutto was really needed for texture against the silkiness of the spinach, and the softness of the egg. There’s always a danger in “customizing” a dish, especially in such an assured kitchen as this one. Lesson learned. Happily, I got to keep the crispy, pleasantly greasy chicken skin chip for myself.

We also shared two “snacks” (according to the menu). The deliciously assertive Kalamata olive flatbread ($12) — a sort of “pizza” topped with fresh mozzarella, greens and pickled onions — as well as the smashed Alaska potatoes ($9) topped with arugula, thick shavings of Parmesan cheese and a generous drizzle of balsamic vinegar. These were excellent dishes to share — hearty and generously portioned.

But the star of the meal (alas, sampled only by me) was my pork belly. The pork is meltingly tender and served on a satiny parsnip puree accented with a drizzle of the gastrique, which I at first mistook for honey. Pickled grapes stud this dish providing a pop of acid to balance the overall earthiness of the protein and vegetables. This is a rustic, perfectly executed dish with thoughtful, unexpected details which, to me, perfectly encapsulates the kind of cooking going on in the Muse kitchen.

One final note: I don’t often analyze, in writing at least, the overall value of each restaurant I review. Dining out in Alaska is expensive: a $16 hamburger is routine, a plate of halibut can cost upward of $40. But I was struck by the pricing on the Muse menu (at least at the times when I visited). The two most expensive entrees were marked at $22 each — one for a New York strip steak and one for a lamb dish, which strikes me as an unexpected bargain. Not many restaurants offer an elegant dining experience with attentive service and generous portions at prices that can be described as reasonable and restrained.

Chef Cole, a recent Top Chef alum (Season 15) with four James Beard Award nominations under her belt, boasts an impressive culinary pedigree. And while her food is thought-provoking and nuanced, it’s also playful and approachable — like, perhaps, a museum exhibit that really resonates. I hope it gets the audience it deserves.

All day a la carte brunch on Sundays