An Alaskan’s Baked Alaska recipe for the holidays 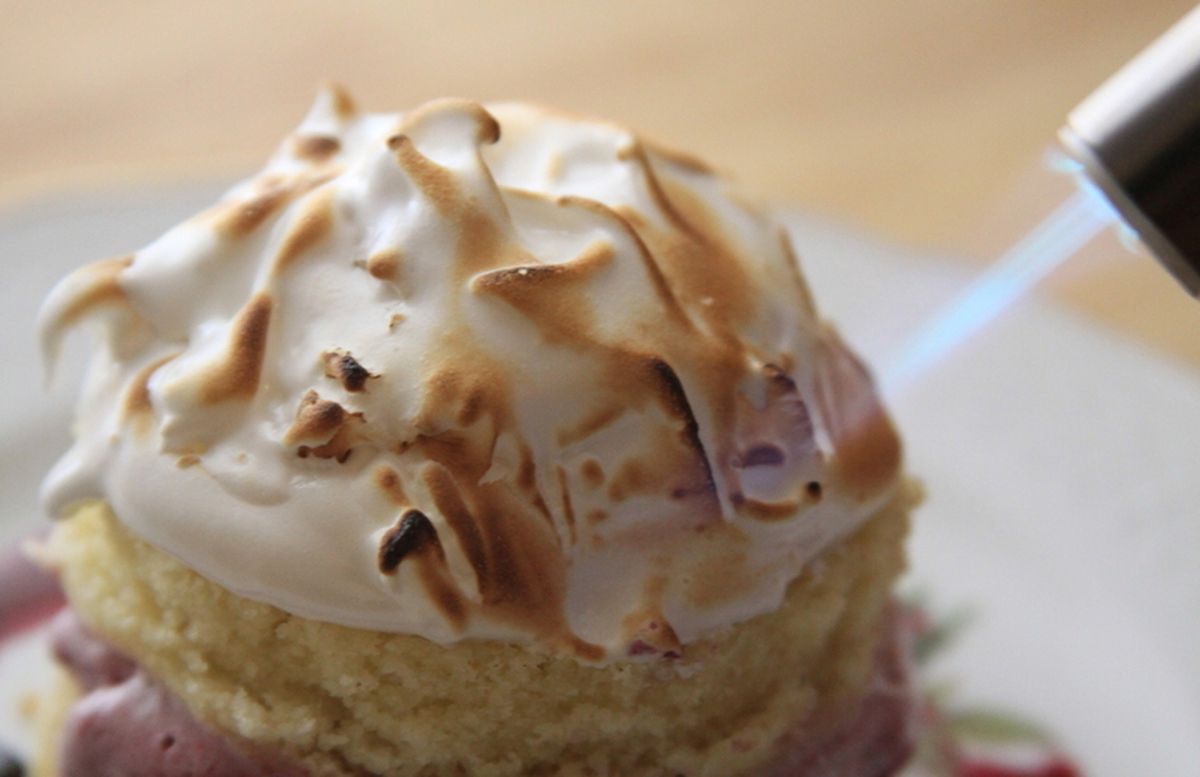 I’m visiting my parents in Virginia. I was one of the lucky ones to have most of my family living in Alaska -- until recently. My parents have fled our cold, slippery winters for a different climate.

Although my parents didn't retire to a condo in Florida or a sunny beach in Hawaii, they are not worrying about sliding on ice as they head out the door in the mornings. They bought an historic house built with solid wood and surrounded by chestnut trees that are older than they are. Quaint horse farms and antique stores dot the landscape around their new home outside of Charlottesville, and the roadside is thick with historic plaques. I can't say I am happy about my parents moving away but I can't say that I blame them, either. Their house is lovely and their garden will extend into seasons long after the snow has fallen on mine.

We are spending the week touring around locally, playing table games, talking about politics, and cooking.

One of my favorite attractions has been a visit to nearby Monticello, home of Thomas Jefferson. I meandered through Jefferson's home and imagined what it must have been like to cook boiled mutton and game birds in the glow of the large hearth that must have been always burning in the kitchen.

I asked the historian at Monticello who was guiding us on the tour if it was true that Thomas Jefferson served Baked Alaska. She said it was certain that Baked Alaska (not called that at the time) had been served in the White House. It had, she said, a profound effect on one group of Native American guests who were in awe of the creation and it helped Jefferson's position in current negotiations.

Jefferson's cuisine was influenced by his years in France and it is assumed he brought the dessert, amongst many other things, back with him. The invention of our modern day Baked Alaska is generally attributed to an Italian pastry chef named Gasparini around 1720. By the time that Jefferson served it in the White House, found on a menu dated 1802 (along with a pie called macaroni), Baked Alaska had made the rounds of European courts. The name "Baked Alaska" first appears in the Fannie Farmer Cookbook from 1896.

Whatever the origins, we now claim the dessert as our own. In my version, I use a recipe surprisingly similar to Fannie Farmer's original from 1896. I make small individual cakes cut from a loaf of pound cake, angel food cake, or other.

Next comes ice cream. I have an Italian ice cream maker in my kitchen (best kitchen gadget investment ever) so we make our own and vary the flavors, but of course, there are plenty of options to choose from in the market.

Instead of trying to really bake the cake in the oven as in older variations, I make a meringue on top of the assembled cake and use a small hand-held torch to brown it. Baked Alaska will work fine actually baked in the oven but the entire cake needs to be encased in meringue to insulate it and I don't think most people really want to eat that much meringue. After whipping eggs and sugar together to make the meringue, you can pipe it using a plastic sandwich bag (snipping one end) or just spoon the meringue over the cake with a spoon.

If you don't have a small hand-held torch in your kitchen arsenal, it's an inexpensive investment. You can use it anytime you want to brown the surface of any foods such as cheese or sugar.

I like to include berries (blueberries and black currants are my favorite) around the base of each cake and crème de cassis is a favorite addition for an elegant touch. In the summer, we press torn wildflowers around the sides for festive color.

The following recipe includes instructions to make a cooked meringue if you have concerns about salmonella. You can just whip the egg whites and sugar together without heating over the water bath if you aren't concerned about this (as I did in the photos). The cream of tartar is an acid that helps to strengthen the meringue. You could use a bit of white vinegar or other in place of the cream of tartar as a substitute.

Method: Cut the pound cake lengthwise to make 1/2-inch thick slices. Cut eight circles from the slices using a 3-inch round cookie cutter (or the rim of a glass or food can). Place a scoop of ice cream on four of the rounds. Top each scoop of ice cream with the remaining rounds of cake. Press down lightly and, using a knife, smooth away any ice cream that has pressed out the sides. Place the cakes onto a baking sheet and cover with plastic wrap. Freeze for about 15 minutes.

Fill a large saucepan with one inch of water. Bring to a simmer. In a double boiler or a metal bowl that will fit over the saucepan, place the sugar, egg whites, water and cream of tartar. Set the bowl over the simmering water and beat with a handheld mixer at low speed for three to five minutes, until an instant-read thermometer registers 140 degrees.

Increase the speed to high and continue beating for about three minutes. Remove the bowl from the heat and beat until cool, about four minutes. When stiff peaks form, beat in the vanilla. Cover with plastic wrap and refrigerate at least 15 minutes.

When ready to assemble, remove the cakes from the freezer, and quickly spread with meringue, swirling to make peaks. Use a hand-held torch (or place into a broiler as close as you can get) to brown the meringue tips, about one minute. Serve immediately.

Kirsten Dixon is an award-winning chef who has cooked and lived the past 30 years in the backcountry of Alaska. To learn more about her, visit www.kirstendixon.com.

Kirsten has been cooking in the backcountry of Alaska for more than twenty years. She is a passionate culinary student, educator, and an avid gardener. Kirsten spends most of her time at Winterlake Lodge, where she frequently teaches cooking classes in the kitchen or gives tours of the herb garden. Kirsten attended culinary school at the Cordon Bleu in Paris, and she holds a masters degree in gastronomy (food history) from Adelaide University in Australia.