A simple and warming bowlful: Broth with spinach and Parmesan dumplings 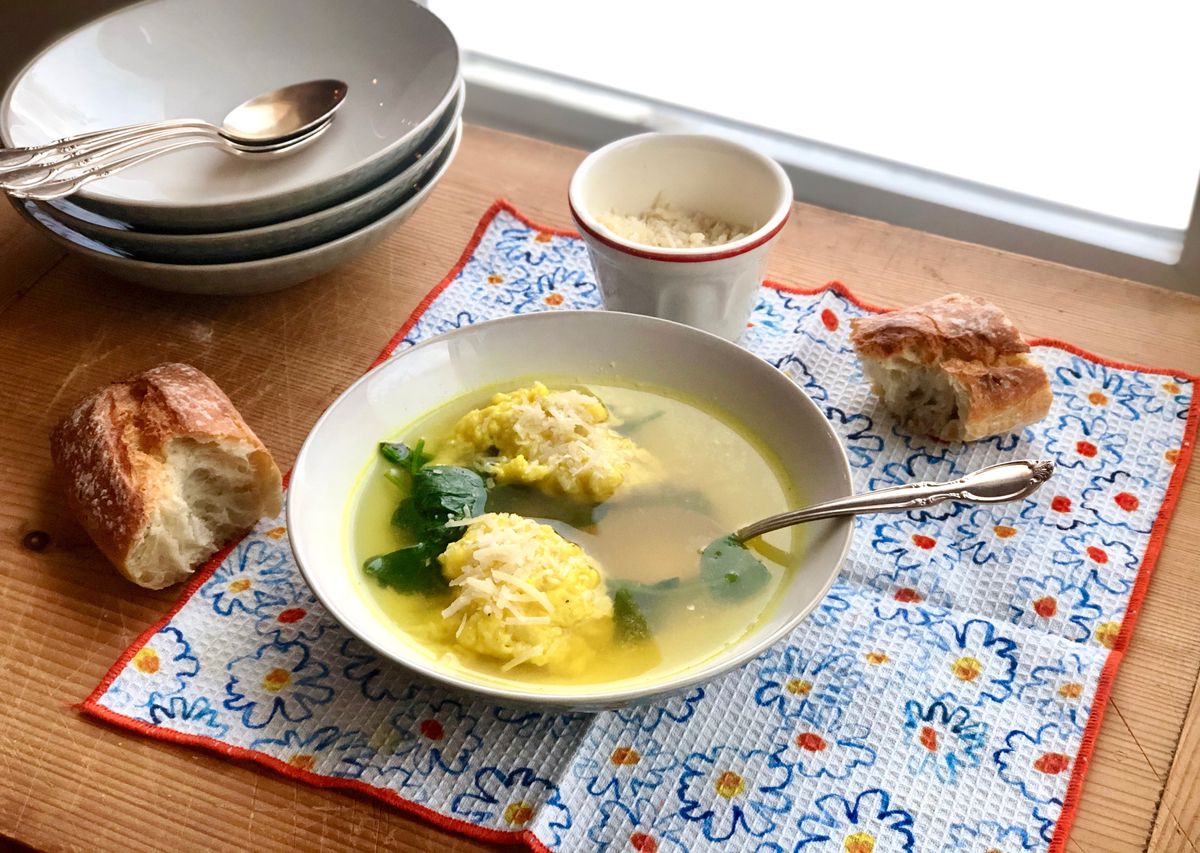 This basic but warming broth with savory dumplings requires few ingredients, so make sure to use the best quality you can find, especially the broth. A good-quality store-bought broth is fine, but nothing beats homemade: Place the carcass of a roasted chicken or turkey, or ham or beef bones into a large stock pot. Add water to cover and then toss in everything — scraps and all that will add flavor: ginger, garlic, celery, turmeric, a bit of miso, mushrooms, some tired greens and bits of this and that, and let simmer for several hours, adding more liquid as the whole glorious mess reduces down to a thick rich stock. Strain and store in the fridge or freezer for uses such as this one. As for the added vegetables, experiment and sub in your favorite quick-cooking favorites, such as kale, mushroom, broccoli, cauliflower, fennel and a handful of fresh herbs.

Broth with spinach and Parmesan dumplings

1. Heat olive oil in a large soup pot over medium heat; add leek and garlic; cook, stirring often, 2 to 3 minutes. Add broth and bring to a boil; skim froth and let simmer over medium heat while making the dumplings.

2. To make dumplings: In a medium bowl, stir together flour, cheese, milk, egg, baking powder, salt and pepper, until a sticky dough forms. When ready to cook dumplings, bring broth to a boil and drop dumpling mixture 1 tablespoonful at a time into the boiling broth. The temp will lower as you drop in the dumplings. When the broth comes back to a boil, reduce heat to medium and let simmer, about 6 minutes, until they rise to the surface. Stir in spinach (or other, thinly sliced vegetables) and let cook 2 to 3 minutes until spinach is wilted. Taste broth and add more salt or pepper as needed. Serve broth and dumplings drizzled with extra-virgin olive oil and more grated Parmesan.

Kim Sunée is a bestselling author ("Trail of Crumbs: Hunger, Love, and the Search for Home," "A Mouthful of Stars," "Everyday Korean: Fresh, Modern Recipes for Home Cooks") and a former magazine food editor. She is based in Anchorage. For more food and travel: kimsunee.com.