Miss the old Roadrunner on Arctic? Alleyway Grille just might be your jam. 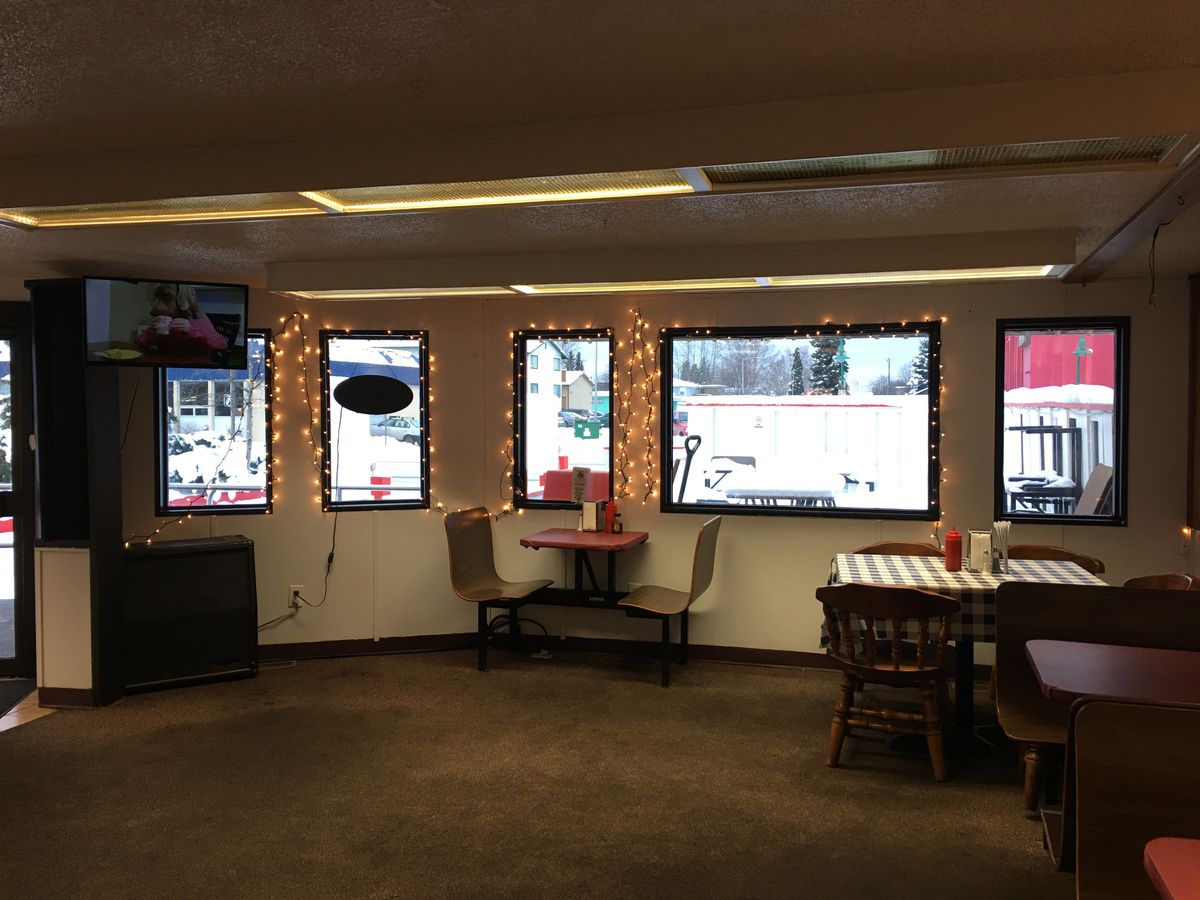 Interior of the Alleyway Grille on Arctic Blvd. (Photo by Mara Severin)

Interior of the Alleyway Grille on Arctic Blvd. (Photo by Mara Severin)

Anchorage has no shortage of good burger joints, but few have achieved the legendary status of Arctic Roadrunner. So when its Arctic Boulevard location closed after more than 50 years in business, there was a sense of loss within the burger-loving community (of which I am a card-carrying member). The grief, happily, was mingled with relief when it became clear that its creek-side location would remain open.

But a burning question remained. What would become of the venerable building that had been serving up shakes, burgers and onion rings through its drive-up window since 1964? The new occupants would have big and well-loved shoes to fill.

I’m happy to report that the Alleyway Grille appears to be up to the task. The owners, having earned their street cred serving up grub to the patrons of Chilkoot Charlie’s, have settled into the new digs and are now serving up what might be best described as bar food without the bar. And every plate comes with a generous side of Spenard nostalgia.

The dining room has not been … transformed. The booths have been spruced up a bit and there’s some fun local art on the wall for purchase, but the space still feels like a vintage rec room – relaxed, comfortable and a bit worn around the edges. And it’s definitely haunted by the memory of the thousands of burgers flipped and potatoes fried over the decades. But the menu itself is fresh and playful – classic roadhouse food with the occasional twist.

I stopped in recently for lunch with a friend and we decided to share a few menu mainstays. We opted for the Alley Cheesesteak ($15), the “Rival” crispy chicken sandwich ($13) and (of course) an order of poutine ($9). Note that both sandwiches came with their own heap of fries. Next time, I’ll nix them rather than regretfully tossing the leftovers. Either that or, I’ll bring a small army.

The Philly was overstuffed, cheesy, and piled high with lots of sautéed mushrooms and peppers. The steak itself, while nicely lean with a good char from the grill, was sliced a bit thick, making it tough to bite through. But overall, this was a satisfying and well-constructed sandwich.

The poutine was all it should be. Rich, silky gravy and generous dollops of melted cheese curds oozed onto a bed of exceptional fries. Hand cut with the skin still on and double dipped, as described on the menu, resulting in fries that were crisp on the outside and tender within. Plain or primped up with poutine fixings, these fries are highly addictive. That said, I would love to see a half-order option on the menu. The portion was huge and weighed approximately as much as a phone book. Even our group of carb-enthusiasts couldn’t make a dent.

The chicken sandwich was the absolute star of the meal. The crispy, battered chicken filet was served on a soft, glossy pretzel bun with bacon, cheese, pickles and a swipe of Buffalo ranch. This sandwich was salty, creamy, tangy and spicy. And the pillowy, squishable bun allows you to get every flavor into every bite -- if you’re not shy, that is, and have access to a lot of napkins.

While I’m not sure if this sandwich is “rivaling” the hyped-up, buzzy sandwiches of notable fast-food chains or if it’s challenging something more local, it’s definitely a contender. I’m on the record for having given my heart to another fried chicken sandwich in town (at Bear Mace Bites). Turns out, when it comes to sandwiches, I’m completely disloyal. I’ll be two-timing from here on out.

Later in the week, I picked up a to-go dinner order for my husband and myself. We opted for the Reuben egg rolls ($7), the breakfast burrito ($10), and a club sandwich ($12).

The breakfast burrito was basically as advertised. Stuffed with sausage, egg, potatoes and cheese, it was tasty if a little bit dry. I would have liked a built-in saucy element to moisten it up a bit (pro-tip: Breakfast is available all-day as well as espresso drinks featuring Uncle Leroy’s roasts. For those who get their morning fuel on the run, the drive-through window would make a tempting detour on a chilly morning).

My club sandwich was tasty but not exactly what I expected. Packed with sliced chicken (though, to be honest, I thought it was turkey as I ate it), ham, bacon, tomato and lettuce, it was more like a sloppy, day-after-Thanksgiving leftover sandwich. Satisfying, yes, but without the neat layers and nicely quartered presentation that I was looking for. I missed the well-balanced panache of a classic club. That said, I loved the anything-but-classic swipe of spicy “AWG” sauce instead of mayonnaise. What’s in AWG sauce? I have no idea. But I want a jar of it in my fridge.

I am still thinking about the Reuben egg rolls which my husband and I “split” but which he, with great wisdom, gave me the lion’s share. Otherwise, we might have come to blows. Chopped corned beef, shreds of cabbage, seasoned sauerkraut, cheese and Dijon mustard were encased in an egg roll wrapper and fried to crispy, greasy perfection. A cup of sweet and briny Thousand Island dressing was served on the side. I could eat these daily.

Alleyway Grille wants to be more than just a friendly place to grab a bite. It’s also striving to be a community hub, with events like a weekly open mic and last week’s all-ages concert with The Jephries and Lowroc. All-ages concerts can have two distinct beneficiaries: music lovers too young for late shows and nightclubs and music lovers too old for them (i.e. me).

Later in the night, Alleyway Grille becomes the post-Koot’s, after-hours food-stop. With radically late hours (open until 5 a.m. on weekends, 1 a.m. during the week), they’ve got a lock on the restaurant service workers, night-shift workers, red-eye travelers or just sleepless snackers.

In some ways, Alleyway Grille maintains what was best about the old Arctic Roadrunner – simple, well-executed food, a welcoming environment and a fiercely local point-of-view. But while it’s not afraid to embrace the building’s quirky legacy, it’s also not afraid to forge its own future. And may that future include lots and lots of Reuben egg rolls.