Chicken, sausage and shrimp jambalaya is one big pot of crowd-pleasing fun 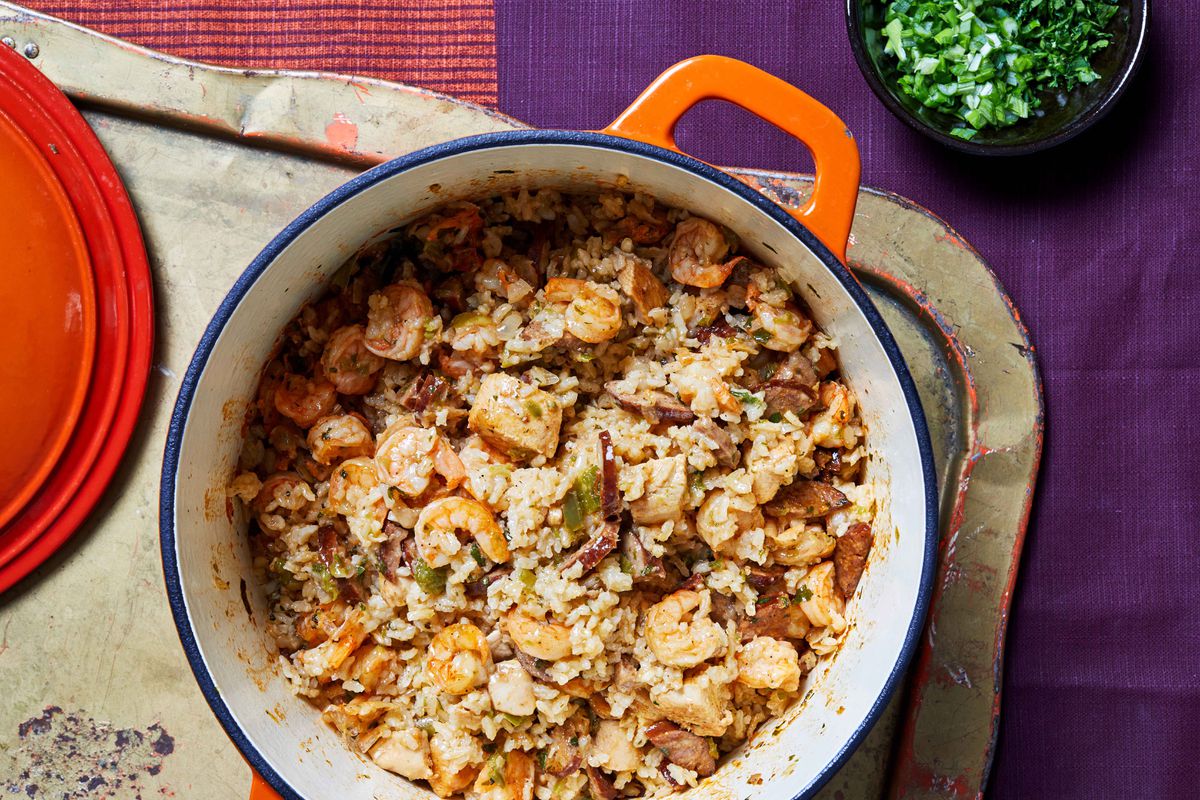 Jambalaya. Photo for The Washington Post by Stacy Zarin Goldberg

Jambalaya. Photo for The Washington Post by Stacy Zarin Goldberg

During Carnival season in New Orleans, I love having a big pot of something on the stove. The goal: Folks can drop by before or after a parade and grab a bowl of something warm and filling. It might be gumbo or red beans, or, in more recent years, jambalaya.

It's the same plan I like to have for any fun-filled busy time, when impromptu house parties break out because family and friends happen by. You make a big-pot dish so you can enjoy the company and not be trapped in the kitchen.

With Mardi Gras on Feb. 25, I've got Carnival and my hometown on the brain, so I decided to whip up a batch of jambalaya using a recipe adapted from "Cooking Up a Storm: Recipes Lost and Found From the Times-Picayune of New Orleans," by Judy Walker and Marcelle Bienvenu (Chronicle Books, 2008). I rarely made this dish until I discovered this recipe. I find it almost foolproof. (Be sure to use long-grain rice for best results.)

If you're unfamiliar with the dish, jambalaya is rice-based and features a variety of vegetables and proteins. Think of it as a second-cousin to paella. That Spanish rice dish is very likely the forerunner of jambalaya, Louisiana chef John Folse writes in "The Encyclopedia of Cajun and Creole Cuisine" (Chef John Folse and Company, 2004). He notes that the Spanish settlers arrived in the early 1700s bringing paella, which was then, over time, adapted to the indigenous ingredients and customs, with smoked sausage, for example, replacing fresh pork or ham.

"The new dish was influenced by many different cultures, including the Africans who contributed their rice, or yaya, to jambalaya," Folse wrote. "The French later named the dish Jambon a la Yaya, meaning ham with rice."

There are folks who will argue about the origin of the dish. And, if you like a good debate, you can extend the argument by asking a group of cooks what goes into jambalaya and whether it should be "red" or "brown." Flip open a cookbook and you'll find the dish made with oysters or crawfish, rabbit or turkey, andouille or tasso. One chef puts in dried oregano. In another cookbook, I saw a recipe for "Creole sauce" to pour over it.

"In my opinion, there are two types of jambalaya - Cajun and Creole," chef and restaurateur Donald Link wrote in "Real Cajun: Rustic Home Cooking from Donald Link's Louisiana" (Clarkson Potter, 2009). "The main difference is that in the Creole version, the rice is cooked in a tomatoey sauce, and the recipe might include shrimp along with meat and sausage."

What follows is the Cajun, or brown, version, which is the type Link includes in his cookbook. It gets its color because the chicken and sausage are seared and allowed to caramelize.

Then, of course, I break with custom because even though the original recipe from "Cooking Up a Storm" calls for just for chicken and sausage, I add a half-pound of tender medium-size shrimp because, well, I really like shrimp. They add flavor and a little textural variety.

If you've never made the dish before, this is a straightforward starter version that requires no special skills and can be made with easily found ingredients. (Creole or Cajun seasoning can be purchased at many grocery stores or ordered online.)

If you're an old pro at jambalaya, then just do your thing.

Make a fresh green salad, heat up some crusty bread and break open a dry white wine, like sauvignon blanc, and enjoy.

Here, we've included a recipe that makes enough for about six people. The recipe, however, is easy to double, or scale up. Just double each of the ingredients; and make sure your pot is big enough to hold the rice once it expands.

This recipe is straightforward and nearly foolproof, so it's a great one for those unfamiliar with this popular South Louisiana dish.

Place the chicken in a large bowl and season with Creole or Cajun seasoning.

Add the onions and pepper, and cook, stirring, until soft and golden, 6 to 8 minutes.

Add the shrimp, water, parsley, scallions and tomato paste. Stir, and bring to a boil.

Add the rice, cover the pot and reduce the heat to medium-low. Cook until the rice is tender and has absorbed most of the liquid, 15 to 20 minutes. Do not stir until ready to serve; then fluff the jambalaya with a fork and spoon into bowls.

Sprinkle with chopped parsley or scallions, if desired.

Adapted from "Cooking Up a Storm: Recipes Lost and Found from The Times-Picayune of New Orleans," by Judy Walker and Marcelle Bienvenu (Chronicle Books, 2008).

Ann Maloney is recipes editor for The Washington Post. Each week, she writes the Dinner in Minutes recipe column.