The best and worst Girl Scout cookies, ranked by a panel of pastry chefs and Scouts 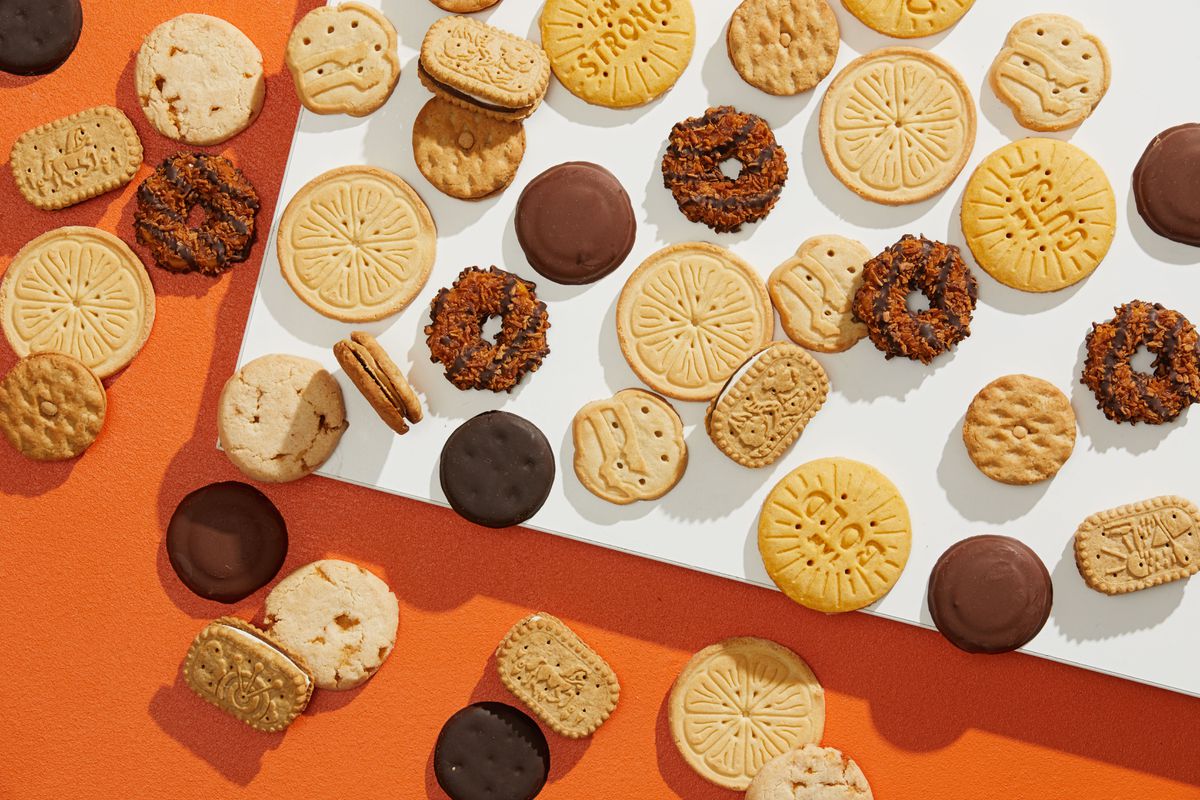 No need to check the forecast. The only one that matters right now is that Girl Scout Cookie Season is upon us.

And with this magical time of year, when colorful boxes adorn co-workers' desks and kids hawking sweets appear at grocery-store booths, comes the inevitable forming of camps. Are you #TeamSamoa or a die-hard Thin Mint stan? Does peanut butter trump lemon?

To settle such divisive matters, we brought in a panel of judges who were more than up to the task. We enlisted two professional pastry chefs: Claudia Barrovecchio of Fiola and Paola Velez of Kith and Kin. And since no one knows Girl Scout cookies better than the folks who sell them, we added three local Scouts - 13 year-olds Kimorra Buggs and Ross Donlan and 10-year-old Mae Maney.

We grabbed boxes or bags of all eight cookies being sold in the area - and added the regional Lemonades, which we had on hand - and got to work tasting them in The Washington Post's Food Lab. What followed was an afternoon of munching, sugar-fueled giggling and plenty of opining. (As well as some brainstorming. Here's a suggestion for Girl Scout brass: You probably should hire Kimorra to develop new flavors for you, because she came up with several promising ideas. A sample? "A cookie that's like a brownie, but just the edges.")

But sticking with the recipes that already survived the R&D phase, here's how our panel rated the cookies, from least favorite to cheer-worthy:

This one earned a unanimous "nope" from the judges. "I don't like it in any regard," Ross sniffed.

The tasters agreed that there weren't enough toffee chunks in these otherwise plain cookies - but when they hit a chunk of the confection, they didn't like the sensation. "I thought my tooth had cracked," Kimorra said.

Velez zeroed in on the first listed ingredient, rice flour, which she noted swells as it absorbs water, as a reason the cookies were gumming up her throat - and once the tasting was done, she conducted a science experiment to prove it, crumbling the cookie on a plate, dousing with water, and watching it expand to the panel's horror-slash-delight.

Predictably, the kids on the panel found that there simply wasn't enough going on with this straightforward shortbread that bears the Girl Scout logo. "I think it tastes very plain," Mae said. "And it tastes more savory to me."

Its lingering flavor left a bad taste in some judges' mouths.

But the pros actually found it to be kind of a snooze, too. "Just boring," Barrovecchio concluded.

Kimorra offered a hack (which we didn't try, in fairness to all its cookie competitors) to make the graham-cracker-esque sandwich cookie more closely resemble the real-deal campfire treat, which her troop has enjoyed on Scouting trips. "They're so good in the microwave," she said. "The marshmallows and the chocolate melt."

But overall, the panel found it a touch too sweet, and the faux marshmallow texture got middling marks. "I was bummed that they didn't actually put marshmallow fluff in there," Velez lamented. "It was like eating an Oreo but with graham crackers."

This lemon cookie - a 2020 debut that features positive messages, such as "I am a go-getter" - was the Sahara dessert of sweets, its crumbly texture making everyone reach for their glasses. "Ugh, can I have more water?" Ross asked.

"This one kind of dries up my whole mouth," Velez said, though she said it might serve well, crushed up and mixed with (much-needed) butter, as a crust for a lemon tart. Barrovecchio was turned off, too, by its "fake lemon aroma."

The chocolate coating on these peanut-butter-topped cookies started turning off the judges as soon as they picked them up from the plate.

"It gets messy," Mae complained. "The second I touched it, it started melting in my hand," agreed Ross, who also took issue with the distribution of the peanut butter, which doesn't extend to the outside edge of the cookie, making for uneven bites.

Barrovecchio said that's something professional chefs think about a lot. "That's a very good point," she said. "When you're making petit fours or cookies, you have to think about that - how is the customer going to be eating it?"

Mae suggested a darker chocolate would be a better choice. And Velez disliked the texture: "It felt like a Gusher, but with peanut butter, and I'm out."

The panel liked the looks of this lemon crisp, which features the image of a citrus slice pressed into the top. "The design is pretty," Ross said.

Several panelists docked it, though, for not being original. "It's a rip-off of Savannah Smiles," Kimorra said, referring to a previous lemon cookie the Girl Scouts sold.

And the citrus flavor missed the mark. "I thought it tasted and smelled like manufactured lemon," Mae said - a comment that drew nods of agreement from both Velez and Barrovecchio.

The grown-ups in particular seemed to like the salty/sweet combination the peanut butter-on-peanut butter sandwich cookie offered, and their high scores boosted its ratings. "I like that there are actual pieces of peanut in here," Velez noted. "It aerates the cookie and creates crispness."

"I like that it's salty and not too sweet," Barrovecchio said, noting that she wasn't too familiar with the signature ingredient. "We don't have too much peanut butter in Italy!"

Kimorra thought the filling-to-cookie ratio was just right, but ultimately, the younger judges concluded that it was an also-ran. "It's good, but like when all the Thin Mints are gone and all the Samoas are gone, I'll eat this," Ross said. Which brings us to . . .

The silence as we served this ring-shaped cookie topped with caramel, chocolate and coconut was a testament to its popularity. Instead of just a nibble, most of the panel was chomping. Coconut can be divisive: Mae loves it, but Ross "despises it with a passion."

But it won the high scores from enough tasters to make it the runner-up. Still, even among its biggest fans, it seems the Samoa is best enjoyed in moderation. "You know how you can buy Girl Scout cookies and some of them you can binge and like eat forever?" Kimorra asked. "This isn't one of them. They're kind of heavy."

A sign that we were about to meet the big winner: As we passed out the iconic discs of mint-infused chocolate, a chant of "Thin Mint time! Thin Mint time!" went up around the table.

Some tasters preferred the darker chocolate coating to its sweeter, milk-chocolatey sisters (Tagalongs, we're looking at you!) "I like that it's really chocolately," Mae said.

Kimorra and Ross liked that it was vegan (they both tried the animal-product-free diet for a while). And its crunchy snap was an around-the-panel hit. “It’s a good texture,” Barrovecchio said. She even found the minty flavor more genuine than the others. “It’s kind of refreshing in a way.”