After nearly a decade, this Anchorage family business is still bananas 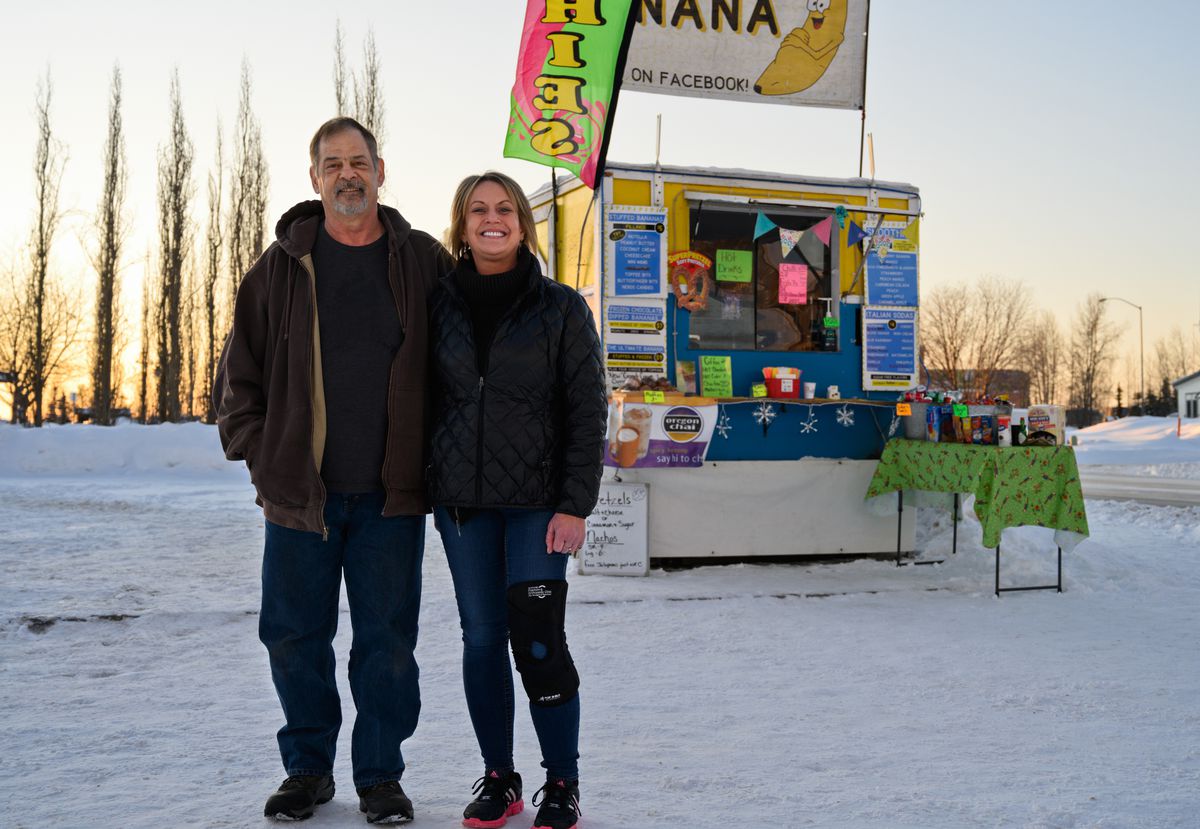 Inside her mobile booth near Ship Creek, Karen House cored a hole lengthwise into a banana, then filled the space with her cheesecake filling. This combination is one of the best selling items, that and her banana stuffed with Nutella.

There was a time when this whole business idea seemed bananas, but now there’s no denying the appeal. AK Stuff Banana, which House co-owns with her husband James Wiegert, has been selling stuffed bananas around the state for nearly a decade, appearing at between 30 and 40 events a year, the estimate. In summer, it’s their only job.

“We’re somewhere every weekend. We do everything from the Renaissance Fair to the Fourth of July on the Park Strip, Girdwood Forest Fair, Valdez Fly-In, Kenai Fair. We go to Fairbanks,” House said. “We’re everywhere.” This week their booth is parked next to the Fur Rendezvous Snow Sculpture display.

House said she picked up the idea while on a trip to visit her mother in Bend, Oregon, in 2011. There, she repeatedly encountered a stuffed banana business which she learned had been launched by a retired Air Force engineer, she said.

House said she had been a part of some failed business ventures over the years, but this one intrigued her. In Oregon she purchased the custom-made stainless equipment and the rights to open the business in Alaska. House hoped it would job she and Wiegert could do together.

“He thought I was crazy when I came back to Alaska and said ‘I’m buying a banana business,’” House said of Wiegert, who was a truck driver at the time.

“Stuffed bananas? What?,” Wiegert recalled saying. “I thought she was crazy. Plum nuts.”

Wiegert changed his tune that first year. The business paid for itself that first summer and it’s still doing well, they said. Their two children, Jaimee and Jesse, pitched in from the beginning and for several years. There, they learned to handle money and serve customers, House said.

The couple hand-selects the bananas from retailers rather than buying them by the case. That way they can stock the larger, straighter bananas that are perfect for stuffing.

Most stuffed bananas are $5. Coconut cream, peanut butter and toffee bits are some of the other flavors on their list of options. The Ultimate Banana - stuffed, frozen and topped - is $9. House and Wiegert say they enjoy sparking curiosity from folks who want to give their unique treat a try. With summer tourists, there’s no end to first-time customers.

After nearly ten years, they’re still having fun and still enjoy hitting the road together in summer. They use Facebook to let their fans know where they’ll be next. The blue and yellow AK Stuff Banana box is built onto a trailer, which gets towed behind their motorhome. House said she typically handles the business and Wiegert takes care of the mechanical needs. One day she hopes to have a storefront location.

“We’re together 24-7. We’re one of those weird couples. After 24 years, we do everything together,” House said.