It’s fiddlehead season, a favorite but fleeting time of year for foraging Alaskans 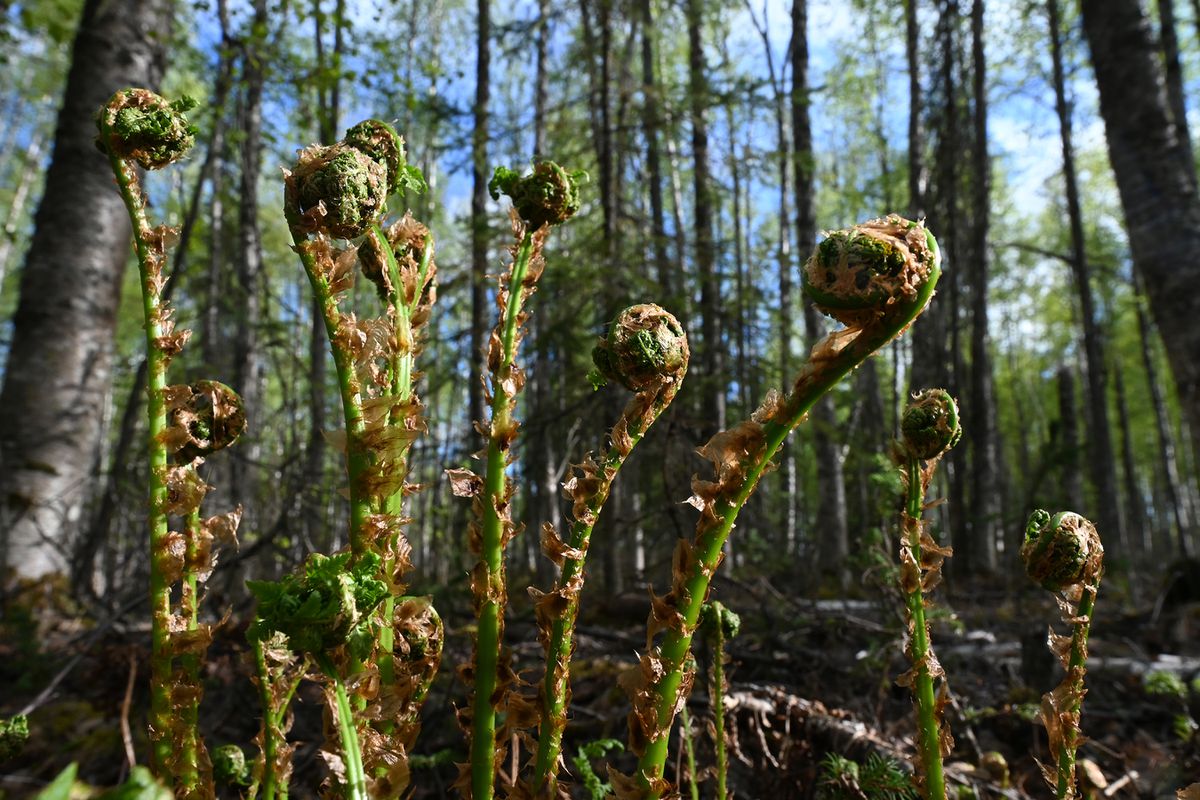 People venturing out onto Anchorage trails may have noticed tightly wound green coils emerging out of last year’s dead leaves. Some people are collecting them, and others are posting their findings on Instagram.

They’re fiddlehead ferns — found across Alaska from the Aleutian Islands to the Brooks Range — and in just a few weeks, the young ostrich and lady ferns will unfurl, making them toxic.

But now, while fiddleheads are at their peak, some Alaskans are making the most of the limited season, roving around trails and parks to fill bags and buckets. People pickle fiddleheads, saute them in olive oil, make fiddlehead pesto or even put them on pizza.

Jennifer Andrulli, an adjunct professor who teaches a class at the University of Alaska Anchorage about Alaska plants as food and medicine, described fiddlehead foraging as a “little treasure hunt.”

Tips on foraging for fiddleheads

No matter how foragers decide to enjoy their harvest, it’s good to know how to properly clean and prepare the finicky ferns.

First-time foragers might not know what to look for or where to find fiddleheads. Andrulli recommends tagging along with someone more experienced and doing research before going out, whether that involves watching YouTube videos or reading books.

She said a similar-looking plant, the bracken fern, has a brown fuzz people have previously mistaken for fiddleheads. Bracken ferns can be poisonous, but so can ostrich and lady ferns if not properly prepared.

“Usually, there are leaves and such that (the fiddlehead is) coming up out of, so you can poke your finger down and maybe get an inch or two of the stalk beneath the little curl,” Andrulli said. “You’re looking for plants that have this brown, woody chafe, or scaly brown stuff.”

Fiddleheads, which mark a stage of maturity in the fern, are often found around moist, cool areas. Andrulli said she finds them in cottonwood forests.

“A nice way to find them is to follow fishing trails,” Andrulli said.

She avoids foraging near roads and railways since those plants may have petrochemicals, and she said that foragers need to know whose land they are taking from.

Many Native tribal organizations, like CIRI, have harvesting forms that can be filled out online, Andrulli said.

Foragers also need to know how to harvest fiddleheads in a way that doesn’t cause irreversible damage, she said. Picking all the fiddleheads off could seriously deplete the plant, and possibly kill it. Andrulli encourages picking no more than a quarter of the fiddlehead ferns per rootstock.

She said while not everyone is spiritual or connected to the plant, many people are.

“The plant may communicate, even less than a fourth,” Andrulli said. “(Be) open to that intuition, inspiration and respect for the plant.”

There are plenty of local recipes that incorporate the curly little ferns, too — like the fiddlehead-walnut pesto from Salmon Sisters or Shannon Kuhn’s fiddlehead avocado toast.

But the bright green spirals don’t look that polished after harvesting. It’s important to know how to clean them effectively.

Chef Drew Johnson with Kincaid Grill said everyone has their own method. Some add them to a pillowcase and toss them in the dryer. His tip for ridding the fiddleheads of their “papery stuff” is to blanch them for four to five minutes in water until they start to “pop a bright green color.” Take them off the heat and place the fiddleheads in a bowl of ice water, then stir them around.

Make sure to remove all of the brown husks around the stem and leaves before fully steaming, baking or boiling the fiddleheads, Johnson said. People have gotten sick by eating them partially cooked before.

He personally enjoys them prepared “as simple as possible” — cooked with butter, garlic and a dash of lemon juice. One of the restaurant’s April specials featured grilled lamb chops with a fiddlehead and asparagus ragout.

He treats fiddleheads like he would asparagus or spinach since their flavor profile is similar. Johnson said they pair well with mushrooms — especially morels.

“You really want to let the flavor of the fiddlehead shine,” Johnson said. “It’s not a very loud flavor — it’s kind of mild in taste — so you want to make sure that you don’t overpower the subtle nuances of what it is.”

Besides being a good source of vitamins A and C, fiddleheads are rich in potassium and antioxidants. “In one cup, there’s almost 27 milligrams of vitamin C, 5 grams of protein,” said Andrulli, the UAA professor.

Amy Foote, executive chef at the Alaska Native Medical Center, said people donate fiddlehead ferns to the kitchen this time of year, in addition to other traditional foods. It’s a way for elders to enjoy traditional foods while at the hospital.

“We use them to really heal people in the sense of reconnecting with their childhood, or their youth, or to the land or a fond memory — just a flavor they haven’t had,” Foote said.

She added fiddleheads to a caribou stew she made last week and pickled the rest of them — all 200 pounds.

“I laugh because people see them pickled, they’re like, ‘Is that octopus?’ " Foote said.

As the season progresses, Anchorage residents can see fiddleheads popping up at higher elevations. By the second week of June, Johnson said, the season will be over.

“It’s such a short window that (fiddleheads) are available,” Johnson said. “They’re here and they’re gone.”