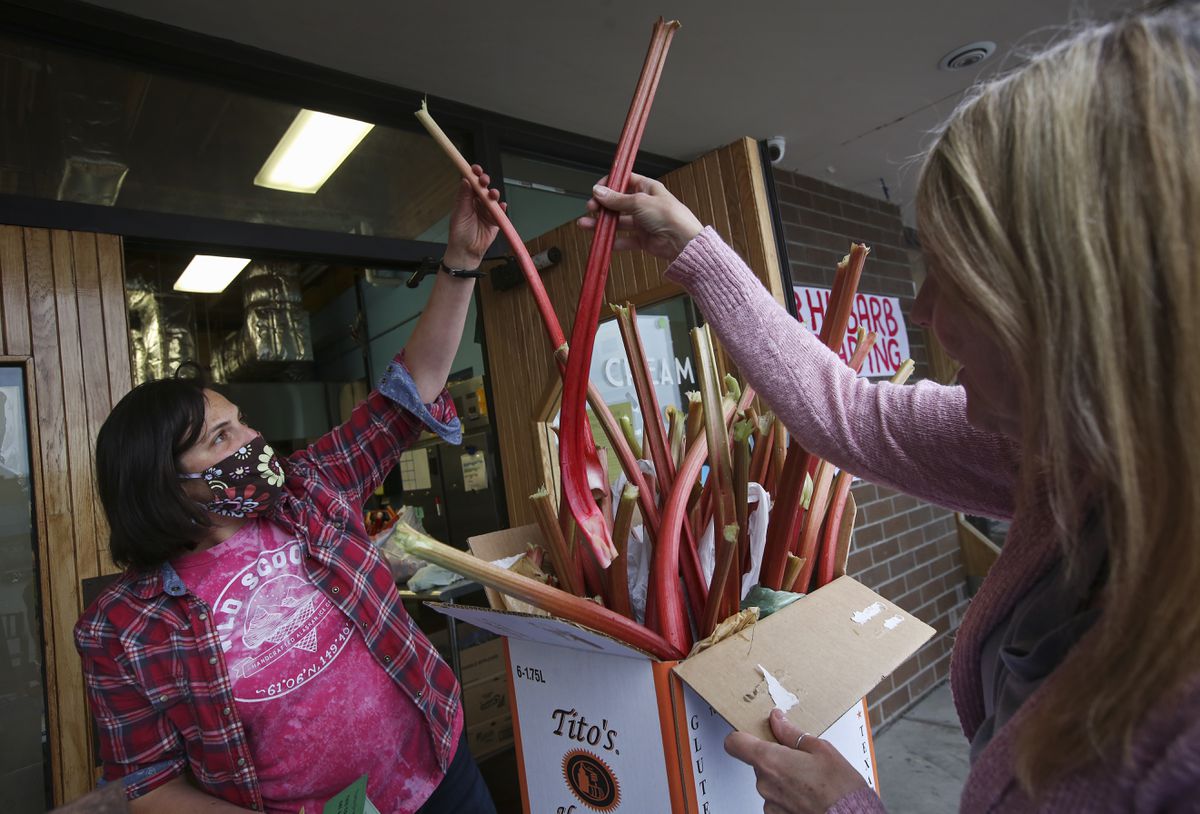 Wild Scoops Owner Elissa Brown, left, and Lavonne Taylor pull large stalks of rhubarb out of Taylor's collection and talk about its quality during the Wild Scoops rhubarb trade in Anchorage on Wednesday, June 16, 2021. Taylor took the day off to harvest her rhubarb, wash it and bring it in to the ice cream store. She traded in just over 25 pounds of rhubarb for ice cream coupons. (Emily Mesner / ADN)

Wild Scoops Owner Elissa Brown, left, and Lavonne Taylor pull large stalks of rhubarb out of Taylor's collection and talk about its quality during the Wild Scoops rhubarb trade in Anchorage on Wednesday, June 16, 2021. Taylor took the day off to harvest her rhubarb, wash it and bring it in to the ice cream store. She traded in just over 25 pounds of rhubarb for ice cream coupons. (Emily Mesner / ADN)

Twice a year, dozens of people line up outside Wild Scoops ice cream shop in Midtown Anchorage with bundles of rhubarb — last Wednesday they came sticking out of Tupperware, plastic bags and a Tito’s Vodka box. There, owner Elissa Brown offers them a deal: $1 per pound, redeemable in ice cream.

“Rhubarb season is such a fun time of year in Alaska, it signifies the start of summer and the start of more fruits and veggies to become abundant,” Brown said.

Wild Scoops and other Alaska businesses collaborate with customers by exchanging cash or store credit for rhubarb. They solicit spare rhubarb from peoples’ backyards for seasonal products — from sherbets to wines.

Those who missed this year’s collecting can email the ice cream shop and be notified about trade days in 2022.

“We’re sort of at capacity since it takes us so long to process it all,” Brown said. “We only have so much space in our freezers.”

The goods will be used for rhubarb crumble, tart rhubarb and rhubarb sorbet.

She said on average, people brought around 12 to 15 pounds of rhu, with one person hauling in 74 pounds. After trading in the stalks, a few people asked Brown if the ice cream was ready; she said it’s still a few weeks out.

For Alaskans looking for somewhere else to deposit their extra rhubarb bounty, there are businesses across the state that are still accepting it.

Marc Wheeler of Coppa — an ice cream shop in Juneau — said he’s been buying the veggie at $1 per pound from customers since opening in 2013.

Wheeler said they get “probably 1,000 pounds” of the rhubarb from people coming in to sell theirs for store credit. Their signature flavor is rhubarb sherbet.

[Photos: Opening weekend for sockeye salmon on the Russian and Kenai rivers]

Coppa incorporates it into specials, too, like rhubarb lentil soup and rhubarb-barbeque-pulled-pork paninis.

“Rhubarb in Juneau is like a weed,” Wheeler said.

Amalga Distillery in Juneau is also buying rhubarb for $3 per pound — chopped and cleaned — redeemable for a gift card or cash.

Besides ice cream shops, breweries and wineries across the state are also cashing in on rhubarb.

“We got flooded with rhubarb maybe four seasons ago now,” Maurer said. “We got about 20,000 pounds of rhubarb.”

Maurer said the winery filled a deep freezer 13-feet-wide by around 30-feet-deep. Unlike other wineries, everything is frozen and products are batched year-round.

He said there are families that stop by each year with harvests, with the intention of selling them to Bear Creek. The winery buys rhubarb for 60 cents per pound, and blueberries for $4 per pound. Everything else falls in the middle, Maurer said.

[Houseplants are booming in popularity among Alaskans, with no slowdown in sight]

“We’ve had children, bringing in fruits and berries that they’ve harvested in their backyard,” he said. “Maybe they’re saving up to get a bike or Lego set or whatever they want to work towards.”

At Turnagain Brewing in Anchorage, owner Ted Rosenzweig offers customers 50 cents a pound and a voucher for the brewery’s tasting room.

“You’ve got your big brewery supporters, the beer nerds and old friends — they’ll really go above and beyond and bring in 50 pounds, 60 pounds,” Rosenzweig said. “And then you have folks who are like ‘Oh, cool, I can get something for my efforts, I don’t really like rhubarb.’ "

Rosenzweig said the veggie will be turned into two different brews: a rhubarb raspberry sour beer and a rhubarb sour.

He’s been doing this since they opened in 2018. The brewery collects around 320 pounds per batch, which makes roughly 160 gallons.

He said they’ll accept another batch later in the summer.

“We really feel like it’s important to locally source as best we can,” Rosenzweig said.