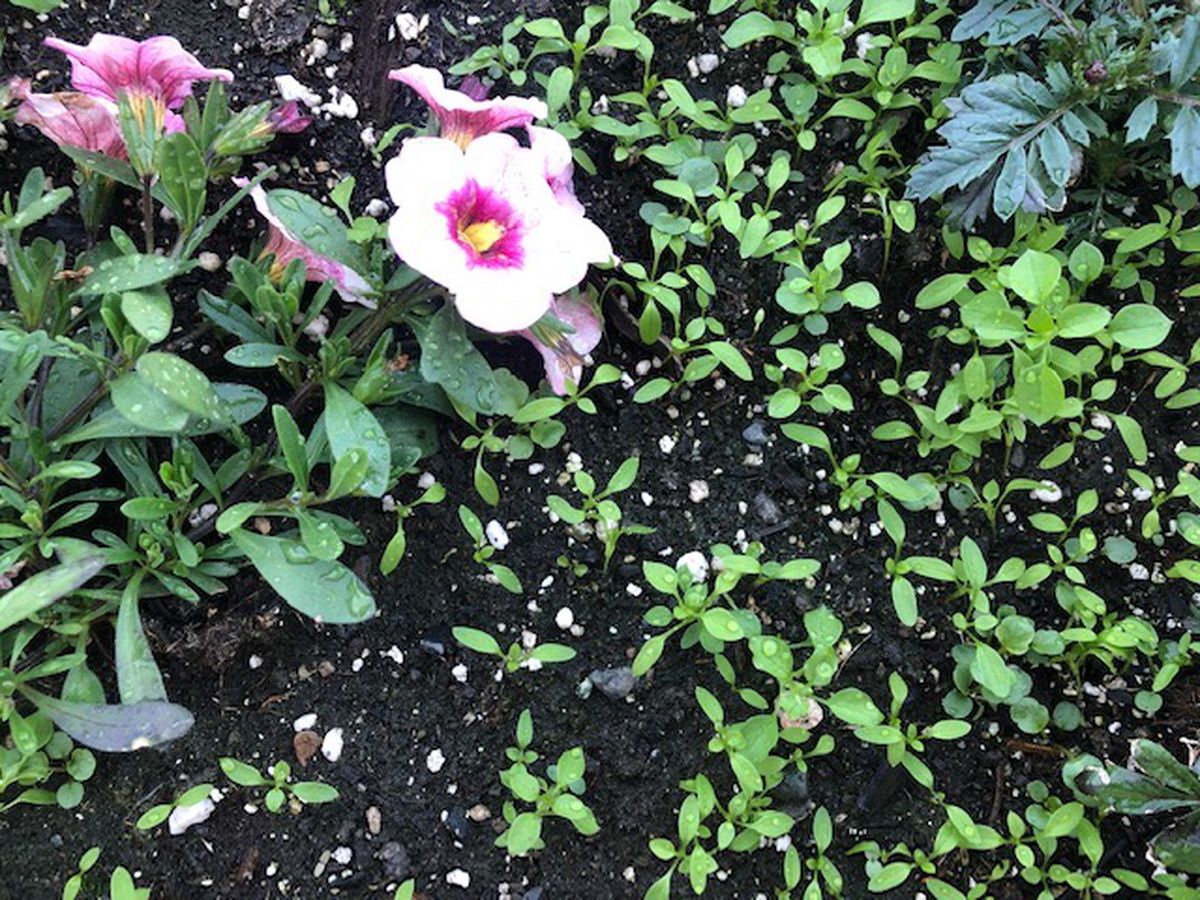 We are just now finishing the first dandelion flush. Hopefully, you were able to mow them under control and didn’t spray them. And, hopefully, from here until late July or early August’s flush, we won’t see any more huge seas of yellow, just individual rafts of flowers. Still, it is a great idea to at least pick the flowers, if not the plants, that do appear.

Next up is equisetum, aka horsetail. It is out in full force in most areas of Alaska and can be dealt with only by removing the above-ground portions of the plant. Don’t even try to dig it out. That breaks the roots. It will only thicken your patch as a result.

If you want to attack something, go after the Stellaria media — chickweed — which is just now starting up. It’s called a lot of names: poor man’s lettuce, miner’s salad, mouse-ear, satinflower, starweed, starwort, tongue grass, white bird’s-eye, winterweed, chickenwort and more. A better name might be “pain in the arse.” It is now time to deal with it.

You will find two kinds of Stellaria media in your gardens and containers. Actually, these are just two stages in the life of the plants. The first are the tiny seedlings. These have only seed leaves and lack branches. The second are the bigger plants, perhaps already in flower, and do have branches.

Let’s start with the seedlings. Literally just a nanosecond of light is enough to trigger chickweed into germination. I have heard of farmers plowing their fields at night to minimize chickweed from germinating! Anyhow, you will find patches with 25 to 50 per square inch and that may be a low estimate. Each of these little guys will produce just as many seeds for next year if you don’t deal with them.

Newly germinated chickweed seedlings are easy to pull by hand, as they are just one single root. Grab the seedling betwixt thumb and forefinger and pull it. And don’t just pull as many as you can and then move on. It just takes time and a wee bit of patience to get them all. And get them all you must! Consider that all of the chickweed you are dealing with came from the one or two plants you did not deal with sometime in the past. See how many there are now?

It is the little seedlings that can be used in salads, though I don’t know why anyone would want to. The second form of chickweeds are bigger plants that have several leaves and branches both above ground and below. Some of these roots break off in the soil when you pull them. They grow into new plants. They can also root wherever a new segment is produced along the stems. For this reason, toss chickweed picked from gardens and containers into a container or a paper bag and let them shrivel and die before putting them on the compost pile. Do not just drop them in the garden as you pull them.

Obviously, the trick is to get all the roots out of the soil when you remove them. A great tool for this is a handheld, CobraHead, a real favorite for all weeding chores that you should consider buying. An old-fashioned handheld tine fork or claw will work too, but without the precision. Either way, get under the plant and lift it out of the soil. Shake off the soil and keep the weed plant.

Once you get the chickweed out of your soils and the equisetum down to the ground, put down mulch to prevent new seedlings from germinating and to avoid more weeding by you. Two to three inches should do fine. You should know the rule by now: Brown mulches, leaves, chips, etc. are used for perennials. Green mulches are preferred by annuals, though you can use leaves, too, especially if they are already decaying or are ground up. As I drum into you all the time, these mulches will feed the microbes in your soil that feed the plants. This is much better than putting down nitrogen fertilizer which encourages chickweed to thrive.

You have other weeds, for sure. Get after them early. Prevent them from flowering and adding to your collection.

Plant a Row: Don’t forget to plant one row for the hungry.