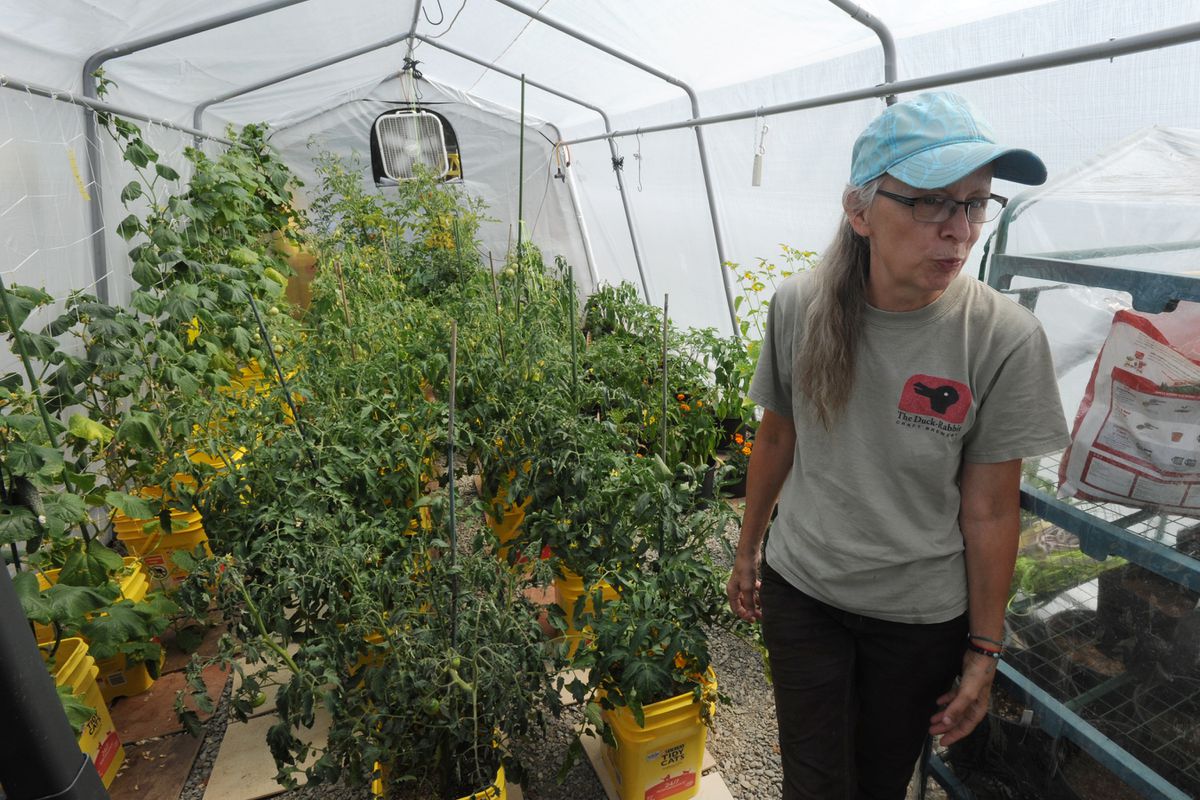 Grant’s garden is one of nine stops in the Anchorage Garden Club’s tour this year. During the annual event, gardeners open up their properties for the public from noon to 5 p.m. on Sunday, July 28.

“[The tour] promotes gardening in Anchorage and is a nice way for people to show off what they’ve worked so hard at,” said Sharon Jones, chair of the Anchorage Garden Club.

She said the tour helps foster interest in gardening and plant species.

“The whole idea behind [the tour] is to show people that gardens are always a work in progress,” Grant said.

Grant never created a blueprint for her colorful yard. Instead, it grew from spontaneous ideas and inspiration she drew from other gardeners.

Grant uses a lot of repurposed materials, like a gate built from an old ladder and springs, or a rail comprised of driftwood. Small houses, a wildflower picking area and fairy garden were placed in the garden to entertain Grant’s 16 grandchildren and four great-grandchildren.

“I obviously like to recycle,” Grant said. “I’m a firm believer of not filling up the landfill if I don’t have to.”

Grant said the abnormal summer heat has changed how some of her plants developed.

Grant’s spinach and beets already went to seed because it was too hot for them, she said, and her peonies finished their cycle, despite their normal blooming time being in mid-July.

Recent wildfire smoke, which blew into Anchorage from the Swan Lake fire on the Kenai Peninsula, didn’t seem to harm her plants, but it limited her time outside because she has asthma, Grant said.

“There’s times where I can’t come outside because the smoke is so bad,” she said.

Sheila Macias, whose garden is also featured in the tour, said the heat accelerated the production of her plants as well. Her peonies prematurely finished their cycle, the summer lilies are flowering and the fireweed is nearly finished blooming.

Macias’s plants are shorter than they were in previous years, like her pea plants that bolted too early. She tried to combat the intense heat by keeping the soil healthy and watering it more often, but her plants were still affected.

Gardeners must improvise when things evolve in unexpected ways, she said, and that also applies to the heat.

Macias’s primary focus is in her front yard, which she has cultivated for about 20 years. A 30-year-old collection of fossils, geodes, petrified wood and crystals are arranged throughout the garden among the flowerbeds.

She decorated her space with vegetables including butterhead lettuce, purple bush beans and radishes, as well as flowers like lilies, columbines and irises. They are nice to look at regardless of their early growth, Macias said.

Learning about different plants and seeing what works in the ecosystem is fun, and the best part about it is sharing the information with others, she said. People are starting to want more than just grass, Macias added, and the garden tour allows for them to learn ways to develop their visions.

Gardens in the 2019 Garden Tour

Noon to 5 p.m. Sunday, July 28. Visitors are asked not to bring strollers or dogs and should not pick any flowers.

This garden is more than 35 years in the making and has a series of “rooms” to see throughout the property. The garden features various perennials that have been timed to bloom at every season so there is always a flower to see.

Since moving to Anchorage from the South, Burnes has had to adapt to a northern growing climate and learn what will survive in Alaska. Despite this, she has been successful in creating a nice perennial garden through trial and error.

These entry gardens show how much can be accomplished in a small space, as well as the value of cooperation between the two neighbors. Tish planned and planted perennials and Carpenter did the heavy lifting and bed digging. Tish created a tea garden-themed space, and Carpenter crafted a garden with his motorcycle parts and helmets as his containers. They give each other equal credit for creating a wonderful little garden.

The Senior Center has a wide array of mature perennials that are cared for by volunteers. It’s a public garden that aims to inspire visitors to plant new material in their own garden.

This garden has mature perennials and a vegetable garden, as well as many island beds that are edged with stones and fossils collected from all over Alaska.

Ward’s garden has many small beds filled with perennials, which are lined with ornamentation that gives the garden a peaceful and whimsical feel.

This garden has a large variety of mature perennials and uses stone pavers and garden ornaments to design the area.

Grant and her husband are creating a kid-friendly garden in their backyard for their 16 grandchildren. They have interspersed a children’s garden and climbing structures in their backyard, as well as a fire pit, vegetable beds and a greenhouse.

This garden is in Year 3 of a five-year plan. Willis has a large lot that is being transformed to accommodate her and her husband’s hobbies. There is a large greenhouse, raised flower beds and hoop houses, as well as an unoccupied chicken coop.