An Anchorage woman noticed red snow in her backyard. Here’s a possible cause. 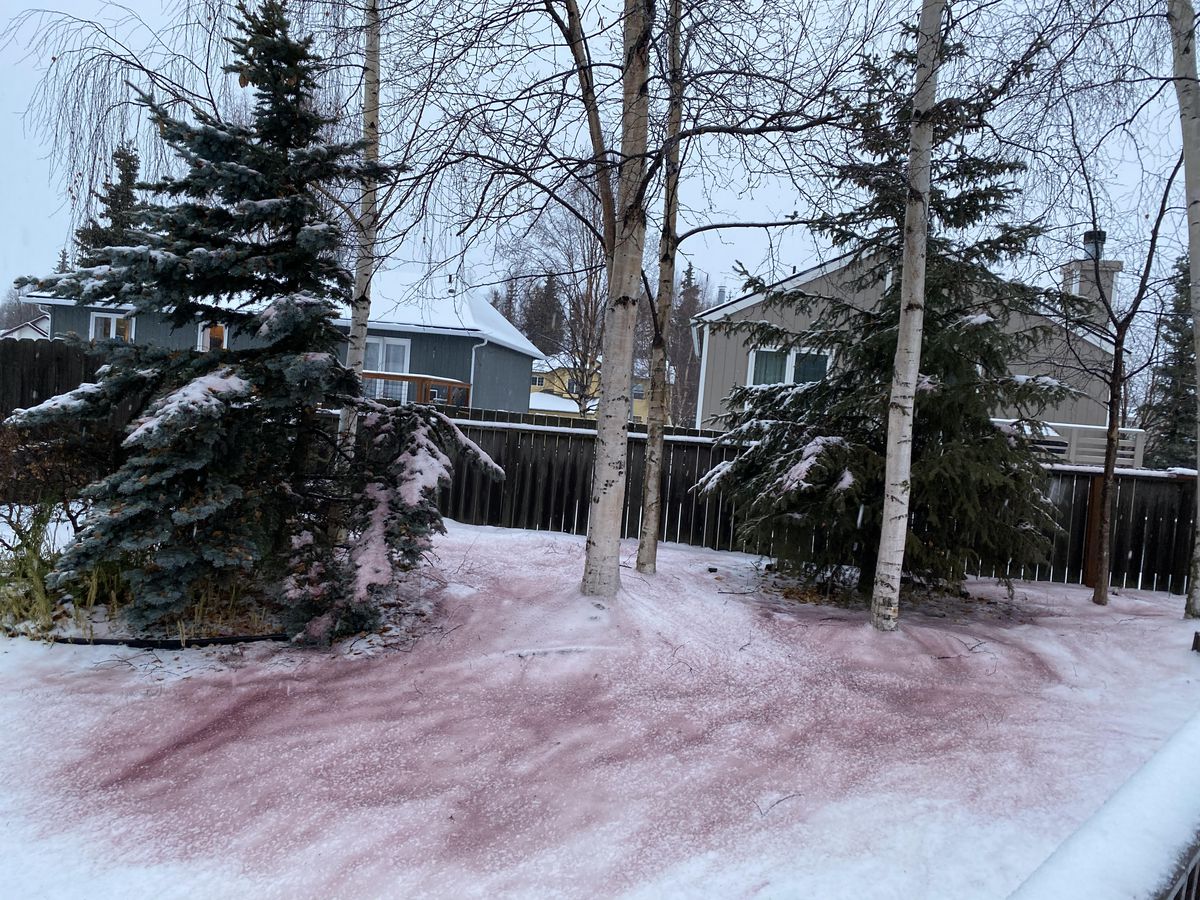 As an Alaska garden columnist, I get a lot of very unusual — some would say strange — questions. A case in point: Last week, a reader wanted to know if I had ever heard of red snow falling in Anchorage.

I do vaguely remember hearing of colored snow mysteriously appearing some place or another, though I have not heard of red snow falling in Anchorage, where we get plenty of yellow snow as well as dirty snow, but not much else. I think I remember a story about blue snow and the cause was “leakage” from an overhead flight! And, didn’t National Geographic run a story on colored snow in Antarctica?

Knowledge base failing, I did what I always do when people ask a question; I asked for pictures. Who would have thunk it! What she sent showed a scene that looked like a giant had taken a huge can of red spray paint and swiped it across her back yard, as if it was the start of some kind of holiday decorating. There was a strip that covered part of an evergreen and not the rest. Some of the snow was covered, and right next to that, nothing.

Now, I know I should probably have referred this question to Ned Rozell, crack science writer at the University of Alaska Fairbanks’ Geophysical Institute — and for my money, the best at his art. He may yet chime in with the answer. However, I am going to take a stab at what our fellow gardener saw.

First, there have been reports of red snow caused by — are you ready for this — fallout from dust clouds originating in the Sahara desert. Really! Huge clouds of Sahara dust are blown around the globe, probably even over Alaska. It gets mixed with moisture and falls out as rain or snow.

I don’t think this was the cause of the reported Anchorage red snow. The more probable cause is algae, more specifically a species called Chlamydomonas nivalis, just in case you want to study them in greater detail than here. These algae are actually green, but when it is warm enough, individual cells produce a red, carotenoid pigment. This substance serves as a sunscreen, which protects photosynthesizing chloroplasts in the alga cell from ultra violet rays produced by the sun.

The red color causes the algae to absorb more heat than the snow around it because it is darker. This causes the snow to melt faster, a survival mechanism for the algae. The melt increases the water in the area of the alga. This water is needed for the algae to move about and multiply. This is not a trivial phenomenon. There is enough melting around the world as a result of this red pigment to make red snow an important factor in global warming and the shrinkage of glaciers.

Some who have encountered red snow claim it smells distinctly like watermelon. Apparently, like asparagus in urine, not everyone can detect the odor. However, enough obviously have encountered the smell to give the phenomenon of red snow its common name, “watermelon snow.”

What my reader really wanted to know was if this red snow is toxic. My research suggests that it’s not and there is no worry about kids and pets playing in it. We probably shouldn’t be putting snow in our mouths willy nilly, however. As I wrote last week, snow contains bacteria and dust particles.

Watermelon snow shouldn’t cause any harm to garden soils. Your soils already contain lots of algae even though you probably have not given them much thought. They are part of the soil food web.

As to turns out, there are more than 350 different kinds of snow-coloring algae. And, as a result, there are lots of different colors of snow, ranging from yellow — hold the jokes — and green to the aforementioned red, as well as orange. So next time, I won’t be so surprised when I get a question about colored snow. Let me know if you encounter it.

Alaska Botanical Garden: There are lots of online activities. Stay tuned to the garden. Holiday lights, anyone? (alaskabg.org)

Snow load and trees and shrubs: Keep a rake and a long pole to knock heavy snow off valuable landscaping.

Organic indoors: Why would you be any different indoors? Practice organics. No chemical pesticides, etc.

Watering houseplants: Room temperature is what the microbes that feed your plants are sitting at. Water shouldn’t make the soil cooler! Use room-temperature water.

Poinsettias: They are coming!