Glacier poses, bow ties and a birthday party: What it’s like to be a famous Alaska Instagram dog 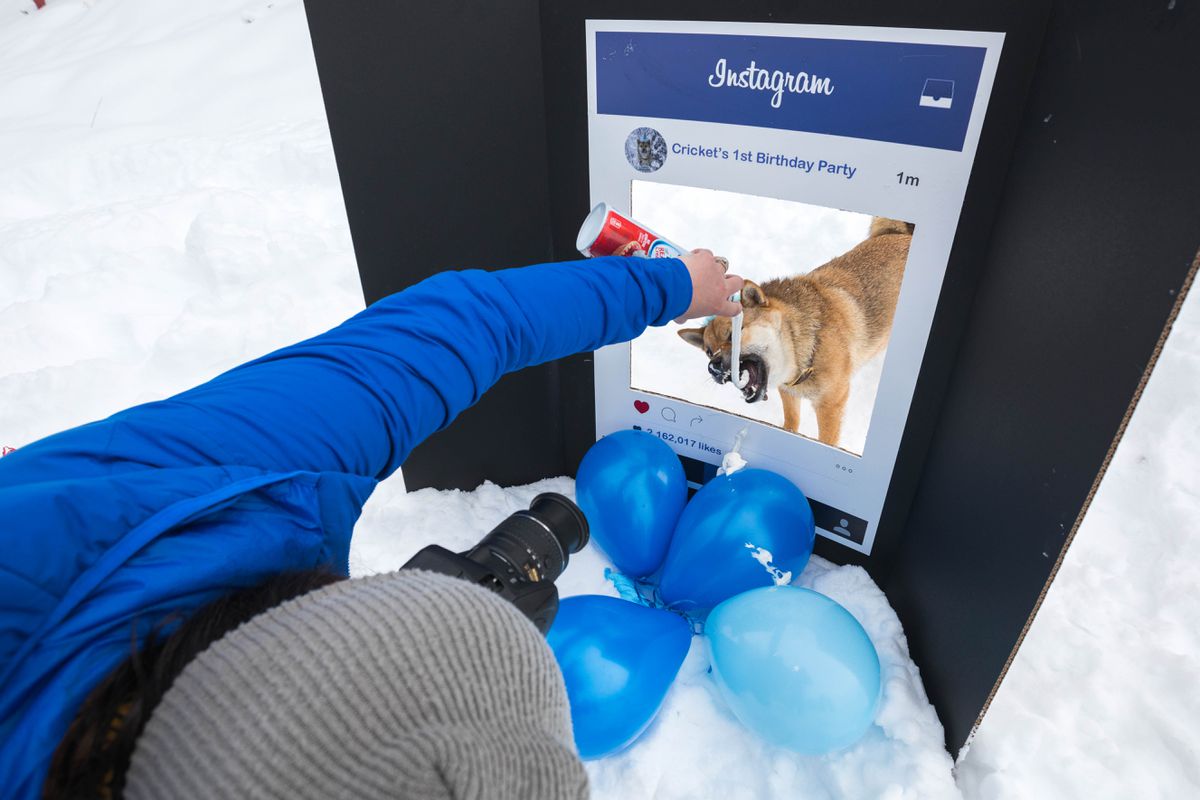 Gabrielle Poon takes a picture of her dog Cricket during Cricket’s first birthday party Saturday at Kincaid Park. Cricket might be Alaska’s most famous dog on Instagram, with over 47,000 followers for his account @cricketinthethicket. (Loren Holmes / ADN)

Gabrielle Poon takes a picture of her dog Cricket during Cricket’s first birthday party Saturday at Kincaid Park. Cricket might be Alaska’s most famous dog on Instagram, with over 47,000 followers for his account @cricketinthethicket. (Loren Holmes / ADN)

A little over a year ago, Cricket, an Anchorage shiba inu with graham-cracker-colored fur and a penchant for rolling in smelly things, was a just newborn pup.

Today, thanks to his owner's command of the algorithmic alchemy of Instagram, he may be one of Alaska's most famous pets. Nearly 50,000 people have signed up to follow Cricket as he clambers around glaciers, plays in the mountains around Anchorage and wriggles into costumes and blankets.

Cricket is part of an international phenomenon that transforms pets into online personas, where people near and far can follow their hijinks. And in an online economy that increasingly revolves around grabbing attention and exposing people to advertising, brands have taken notice of these popular pets. Cricket is now "sponsored," with free bow ties, bandanas, harnesses and collars in exchange for showing off the products in his Instagram photos.

Cricket's owner, Gabrielle Poon, didn't start out wanting to make him a star. She just wanted to share pictures and videos of her new puppy with her family.

As she posted on Instagram, though, she realized she'd hit on something: If she took pictures and told stories from Cricket's perspective, people loved it.

"People message me every day saying, 'We really love Cricket, it really makes our day better' — and that aligns with my career goals," said Poon, who works in the mental health field. "That's where I'm coming from, continuing to post."

A September video of Cricket being carried by the harness away from Eklutna Lake, dangling his legs nervously, went viral, racking up several million views between Instagram and Facebook. A couple months later, an Instagram representative contacted Poon about featuring Cricket in a channel called #theweeklyfluff, and that sealed his popularity.

For Poon and other Alaska dog Instagram accounts, this is the bright, fun side of Internet culture. And it can easily turn into real-life friendship.

Many of Cricket's hiking pictures feature a larger brown German shepherd mix named Hank the Happy Dog. His name says it all — he often looks like he's smiling, and prances when he isn't running, said his "mom," Lexi Trainer.

Trainer's husband was obsessed with shiba inus, popularized in a meme known as "the doge." He found Cricket's account, and last year, Trainer messaged Poon on Instagram about a "dog-mom" meet-up. The dogs have been adventuring together ever since.

While she was studying strategic communications at the University of Alaska Anchorage, Trainer started Hank's Instagram account as a practical experiment. She wanted to see what people responded to, and it made more sense to create a separate account for Hank than flooding her own Instagram page with photos.

Writing in Hank's voice seemed more personable, Trainer said. She described it as more of a journal of her dog's life.

"Mom woke up quite sick this morning. I suppose this calls for a cozy day in cuddling with my best lady!" read one of Hank's January posts.

Trainer said that for dog lovers, the posts are therapeutic.

She also likes the idea of helping local businesses. She and Hank have promoted leash, collar and tag companies on Instagram, including one in Finland. She said she's only made money off one photo sale, though she and Hank did get free products.

Rebecca Cole, a sixth-grade teacher in Anchorage, runs an account for her mini Aussie mutt, Denali, known on Instagram as Denali of the North. She contacted Poon through Instagram, and Denali and Cricket now go hiking together too.

Cole said she started Denali's account because she was tired of negativity in the world. ("Glacier advice: be cool, avoid meltdowns," read one of Denali's recent posts.") She said she just wants to make people smile.

Running an account is a lot about personality. Cole said Poon has hit the perfect pitch for Cricket.

"He is exactly how he is" on Instagram, Cole said. "She uses that voice … I think it adds character and more fun to the account."

These days, Poon spends a lot of time answering fan mail for Cricket and writing back to people on Instagram.

Hikes are no longer just hikes, said Poon's roommate, Terranova Tasker. There are photo opportunities everywhere. Poon has used treats to train Cricket to pose at the sound of a camera click.

To make your dog Insta-famous, it takes a lot of time, Tasker said.

"You have to do this every day," Tasker said. "It's more commitment than just, oh, here's my cute dog."

But for those who do it, it's a passionate fan group, Tasker said.

Last month in a snowy clearing in Kincaid Park, the dogs of Alaska Instagram gathered to celebrate Cricket's first birthday.

There was a pinata shaped like a poop emoji, peanut butter "pupcakes" topped with Milk-Bones and raffle prizes and giveaways.

Cricket wore a blue hat with sparkly frills and bounded through snow up to his neck. Poon dropped to her knees to snap a photo of him standing in front of the pinata.

Trainer brought Hank, and Cole came with Denali. There were also newer friends, like Saxon the Moon Bear.

"So many pups I've seen on the Internet!" Cole said happily, looking around.

Later, after the barking had died down, Poon sprayed whipped cream on the pinata so the dogs would come up and lick it. She whacked it with her fists until treats and tennis balls spilled out.

As the dogs swarmed in, everyone oohed and ahhed, and pulled out their phones and cameras.