When is the best time to clone your dog? 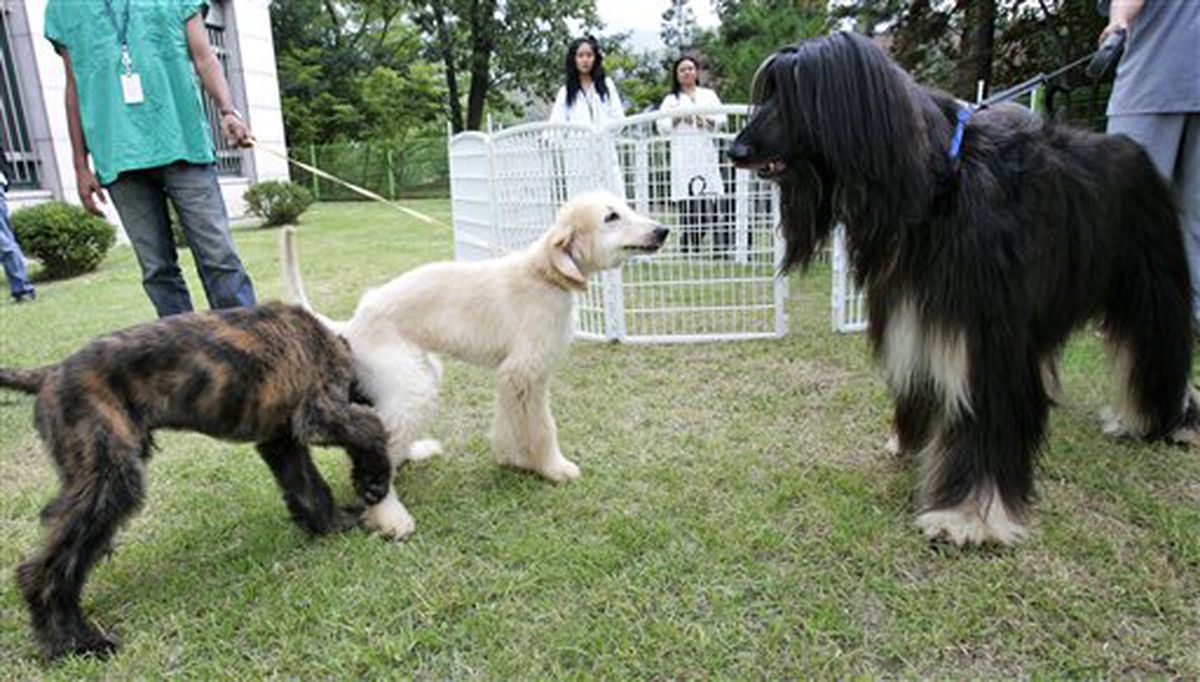 He was the runt of the litter, half the size of the other puppies, but he was adorable. Something stirred in Amy Vangemert's heart, and she decided he was meant to be with her. She named him Buhner after the Seattle Mariners' right-fielder Jay Buhner and promptly fell madly in love.

"Probably to the point where people would think I'm crazy," she says with a laugh. "And I'm not crazy."

The two were inseparable. As Buhner got older, Vangemert got emotional just thinking about life without him. She adopted a rescue dog named Bella and assumed that she'd get another toy poodle when Buhner died.

Then she saw a segment on "60 Minutes" about pet cloning. The technology once reserved for livestock - Dolly, a cloned domestic sheep, made international headlines when she was born in 1996 - was now available to anyone.

"That is crazy," she told her husband. And expensive: $50,000 to clone a dog. But Vangemert and her husband own a recycling business in Washington state, work long hours and decided it was worth a look. She discovered ViaGen Pets in Texas, just one of two companies in the world cloning dogs and cats.

"I thought, 'Do I wait until he passes away before I start the cloning process? Or do I do it now?' " she explains. "The thing that was most important is that I didn't want any false illusions that they were Buhner. I'm not this crazy lady who thinks Buhner has been reincarnated. I wanted to bring two puppies into my life to get to know him and just to have them together."

The three poodles look identical, but each dog has a distinct personality. She loves them more than she could have imagined and doesn't regret a penny of the cost.

"I would do it again in a heartbeat because I have two of the most beautiful puppies you've ever seen in your life," she says. "They turned out exactly what I was hoping for - and that was just a piece of him."

"Crazy" is a word that comes up a lot when talking about pets and their owners. Americans spent $72 billion on pets in 2018, a testament to our willingness to pay for the uncomplicated, unconditional love they bring to our lives.

Ginny Brancato lost her cat in 1998. Fifi, the Florida resident says, was her “soul mate, the joy of my life.” When she died, “I was grieving more than a cat. I was grieving a part of me. People didn’t understand it.” So she founded rainbowsbridge.com, a website that allows owners to remember their pets, share their stories, validate their love and their grief. But it couldn’t bring them back.

Then, over the last decade, science provided an alternative: pet cloning.

What once was reserved for the wealthy and eccentric has entered into the marketplace as an alternative option to adopting or purchasing a dog or cat. A Gallup poll last year found that 40 percent of Americans think it is "morally acceptable" to clone an animal, the highest number since Gallup starting asking the question 18 years ago.

The poll was taken shortly after singer Barbra Streisand made headlines for cloning Samantha, a Coton de Tulear that died in 2017.

"I was so devastated by the loss of my dear Samantha, after 14 years together, that I just wanted to keep her with me in some way," Streisand wrote in the New York Times. "It was easier to let Sammie go if I knew I could keep some part of her alive, something that came from her DNA."

Sammie had an unusual, hard-to-find curly coat, which was one of the reasons the singer decided on cloning. Shortly before she died, her vet sent tissue samples to ViaGen. Uncertain of the results, Streisand got another Coton de Tulear she named Miss Fanny.

But the lab produced three cloned puppies - one that went to the daughter of a friend and two, Miss Violet and Miss Scarlett, who live with Streisand.

"So now I have three puppies at home, Miss Fanny, Miss Violet and Miss Scarlett, and it's a bit overwhelming," she wrote. "But we love them so much. Each puppy is unique and has her own personality. You can clone the look of a dog, but you can't clone the soul. Still, every time I look at their faces, I think of my Samantha . . . and smile."

ViaGen Pets got into the cloning business the old-fashioned way: livestock, mostly cows, pigs and horses. They began preserving pet DNA 17 years ago but didn't start actually cloning dogs and cats until 2015 - after a South Korea company had successfully produced cloned pets.

Most of their clients are dog lovers who own mixed breeds, mutts who turned out to be the "best dog ever," says Melain Rodriguez, ViaGen Pets client service manager. "And so they want to clone it because there's no way to reproduce the exact same mixture."

The process is relatively simple: A vet extracts a tissue sample from the pet while it's still alive, or shortly after death if the body has not been frozen. For a storage fee of $1,600, the DNA is preserved in liquid nitrogen. Of the thousands who send in DNA, only about 10 percent have cloned their animals: $50,000 for a dog and $35,000 or a cat.

"A lot of our customers are coming to us when their pet is near the end of its life," says Rodriguez. "And it gives them some hope and some peace. They may never clone that pet, but knowing that they have that possibility, that the DNA is stored, is a way to memorialize their pet."

If an owner decides to proceed, the pet's DNA is used to create embryos using somatic cell nuclear transfer, the same science that produced Dolly the sheep. Those embryos are transferred into surrogate mothers, and the owner is promised one healthy puppy or kitten.

They get a full refund if the attempts are unsuccessful; sometimes the pregnancies result in two or three clones (at no additional charge).

The No. 1 question, says Rodriguez, is whether the personality is going to be the same, and they never guarantee the clones will behave the same, although they expect some similarities.

"We knew temperament is genetically linked," she says. "But personality is that mixture of your environment and genetics. And what we're finding is there seems to be - based on feedback from our clients - a stronger correlation between personality and genetics than we ever realized. We're having some clients that tell me, 'This is a reincarnation of my pet. It's exactly the same.' "

The news about Streisand's clones prompted a flood of outrage from activists and ethicists who strongly oppose the practice. The Humane Society of the United States opposes any cloning of animals for commercial purposes - either as pets or research - calling it a "frivolous enterprise" that should be prohibited by law. The American Kennel Club, already under fire for championing purebred dogs, will not register clones.

Other animal lovers are dismayed by the number of dogs and cats abandoned to shelters. "Adopt Don't Shop" is the mantra for choosing rescues over purebreds. To many, creating clones is even worse when so many animals need a loving home.

Some people are offended at the cost, as if spending $50,000 on a clone is morally worse than spending the same amount on a luxury car, diamond ring or other personal indulgence.

But the real unease seems to come from the question of cloning itself. As the technology is perfected, the possibility of human cloning becomes more real - something deeply unsettling to many, especially those who consider themselves religious (in the same Gallup poll, only 16 percent approved of human cloning.) Cloning is a recurring theme in science-fiction thrillers like "Never Let Me Go," in which clones are raised for organ harvesting, and "The Secret," the story of a teenage girl who is horrified to discover she's her mother's clone.

If a grieving pet owner can clone a dog, is it a big leap to grief-stricken parents trying to clone a dying child?

Brancato, who adopted two more cats after Fifi died, absolutely believes she will be united with her pets in heaven and "we'll be together forever and ever and ever." So she doesn't think she would have cloned her, even if the option had been available.

"I would have gotten some of her DNA but I wouldn't have gotten a real, genuine Fifi," she says. That being said, she's not opposed to the procedure: "I'm all for it if it makes you happy. But I think we're all individuals, even our animals, and personally I wouldn't have done it."

It was love at second sight: In 2006, a man walked into a New York police station with an abandoned little dog - half Lhasa Apso, half Shih Tzu - and the policeman on desk duty called animal control.

But then, a fateful change of heart: He was about to step into his car when he stopped, went back in, and brought her home. "It was the way she looked at me," he says. "It's almost like she knew I rescued her."

He named her Princess. He had pets all his life, but this dog was something special. "Priceless," he says.

Eleven years later as she was dying of cancer, he decided to preserve her DNA. He researched the topic, spoke to other pet owners and even flew down to see ViaGen's facility in Texas.

On the first anniversary of Princess's death, he decided to clone using money he carefully saved over the years. He didn't tell his family (and spoke to The Post on the condition of anonymity) because he assumed they would be critical of spending that much money to clone a pet.

Now he has two 8-month-old puppies: Ariel and Jasmine, named after Disney princesses. They are, he says, just like his Princess. And 100 percent worth it.