Homebound during a pandemic? More Alaskans decide now’s a good time to adopt a pet. 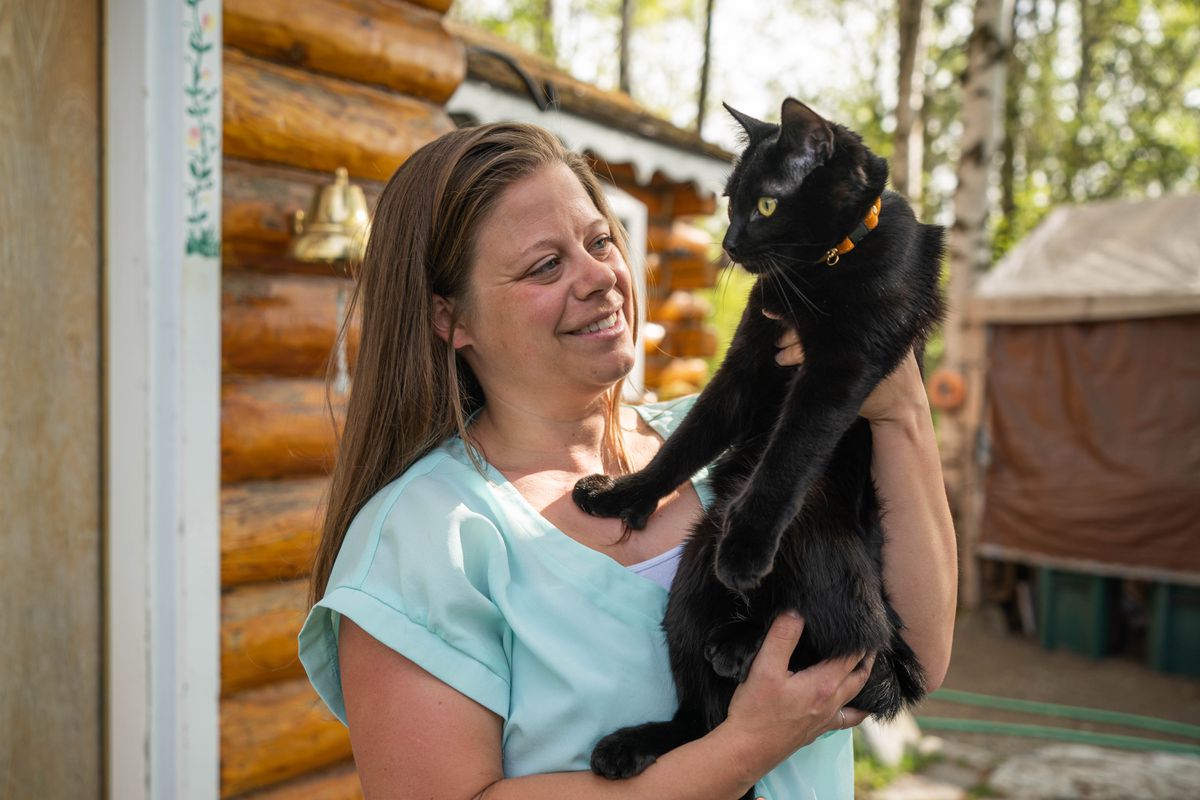 Sarah Wilcox holds her cat Sirius outside her home Wednesday, May 20, 2020 in Spenard. Wilcox and her husband rescued the cat in late March after their other cat died. “He is the best,” she said. “He is my little buddy. I don’t know if I would be OK without him.” (Loren Holmes / ADN)

Sarah Wilcox holds her cat Sirius outside her home Wednesday, May 20, 2020 in Spenard. Wilcox and her husband rescued the cat in late March after their other cat died. “He is the best,” she said. “He is my little buddy. I don’t know if I would be OK without him.” (Loren Holmes / ADN)

Sirius is a big, black cat with extra toes on his front feet.

He’s a snuggler, but he’s also always ready for playtime. And when his owner, Sarah Wilcox, returns home from a tiring 12-hour shift working as a mental health clinician in the Providence Alaska Medical Center emergency room, he follows her from room to room.

Wilcox and her husband adopted Sirius in March, just as COVID-19 pandemic restrictions were being tightened across Alaska. She said Sirius has been comforting amid the uncertainty and has kept her company while her husband temporarily relocated to Fairbanks for work.

Pets have been adopted much more quickly than usual from Anchorage Animal Care and Control, despite the center closing its doors to walk-through visits during the pandemic, said public relations coordinator Laura Atwood.

After photos of pets are posted online, the animals are gone within days, Atwood said. Nearly every dog up for adoption has found a home in one or two days, while cats are spending a day to a week at the shelter, she said. Smaller animals, like gerbils or guinea pigs, take a little longer to be adopted, but Atwood said they still seem to be leaving the shelter much sooner than they would during normal circumstances.

“I’ve been hearing from some people about how they’re working from home, so now is a good time to bring a pet into their lives because they’re home more,” she said. “I’ve also been hearing some people say that with all the uncertainty now, this is a kind of scary time and that they want a pet there to bring them comfort.”

Atwood said the quick adoptions are coming at a time of year when the Anchorage shelter generally has more pets available, especially cats. Usually, more kittens and stray dogs are surrendered to the shelter in the spring, she said.

Pets at the Matanuska-Susitna Borough Animal Shelter are also finding homes more quickly, said acting director Matt Hardwig, although he said the shelter has undergone significant changes during the past few months unrelated to COVID-19.

“We’ve made policy changes to lessen the amount of time they’re here for,” he said. “It’s hard to say if it’s that or because of COVID that adoptions are up. They sort of go hand in hand.”

The shelter doesn’t have any animals that have been there since before April, which is unusual, Hardwig said. There have been fewer animals coming into the shelter during the last few months, but Hardwig said that’s also partly because the department is not currently loaning live-animal traps to the public for the capture of strays.

The Anchorage and Mat-Su shelters have been operating by appointment only. Hardwig said his shelter could easily have become a community hot spot because people often visit just to see the animals even though they don’t plan on adopting.

At the volunteer-operated Alaska Dog and Puppy Rescue, president Emily Oliver said the pandemic has drastically changed operations. The rescue is run entirely by volunteers, and dogs live in foster homes temporarily because there is no central shelter. Oliver said the dogs are rescued from all across the state but most foster families are in the Anchorage and Mat-Su area.

Oliver said it took about a month for their business plan to be approved by Anchorage officials and they were allowed to operate again. During that time, dogs remained in foster homes.

The volunteers have been sorting through a backlog since they began doing adopter visits again, Oliver said. They screen potential adopters over the phone to ensure they meet the adoption criteria before they meet the dogs. Some adopters and foster families feel uncomfortable meeting each other, even from a distance, Oliver said.

Across the country, animal shelters have reported record numbers of adoptions during the pandemic. Oliver said she’s nervous about what that might mean as people begin going back to work.

“I’m apprehensive about if they’ll keep their new family members when life gets back to normal,” she said. “This happens after Christmas and after the holidays when people get dogs as gifts, and then the shelters fill up a few months after because they realize it’s a bigger commitment than they’d thought. I hope that’s not the case, but it’s at the back of my mind.”

The Anchorage shelter is offering a pet food bank for owners hurt financially during the pandemic. Atwood said the shelter sets dog and cat food and cat litter outside its doors every morning. They are operating on an honor system right now. The Anchorage SPCA also has a pet food bank set up, and Atwood said volunteers from an Anchorage-based nonprofit, The Normandy Project, deliver pet food to regular food banks so people can pick up pet supplies at the same time.

Wilcox, who adopted Sirius, said her previous cat died unexpectedly in mid-March, and three days later she and her husband found themselves at the Anchorage shelter. She’d wanted a big, fluffy cat like her last pet, but when she locked eyes with Sirius, her heart melted and she knew it was a done deal.

She said she feels thankful to have a companion during the pandemic. She frequently asks patients during her work as a mental health clinician if they have pets, because animals can help reduce stress.

“They’re a touchstone of comfort,” she said.

For 13-year-old Lauralei Oathout, her hamster Bear has kept her busy in the absence of school socializing. The family adopted the hamster several weeks ago from the Anchorage shelter.

“She was quite lonely, but Bear has been a great little friend during all this,” said Lauralei’s mother, Mary Curry.

The family already has another hamster, but Curry said they’d been watching the shelter’s Facebook page in hopes of finding a rabbit to adopt. When they saw that Bear was still there after about a week, Mary Curry knew it was time to add her to the family.

“I mean, how can you say no to a little face like that?”