Newtok, canine sentinel of South Addition who brought grace amid turmoil, has died 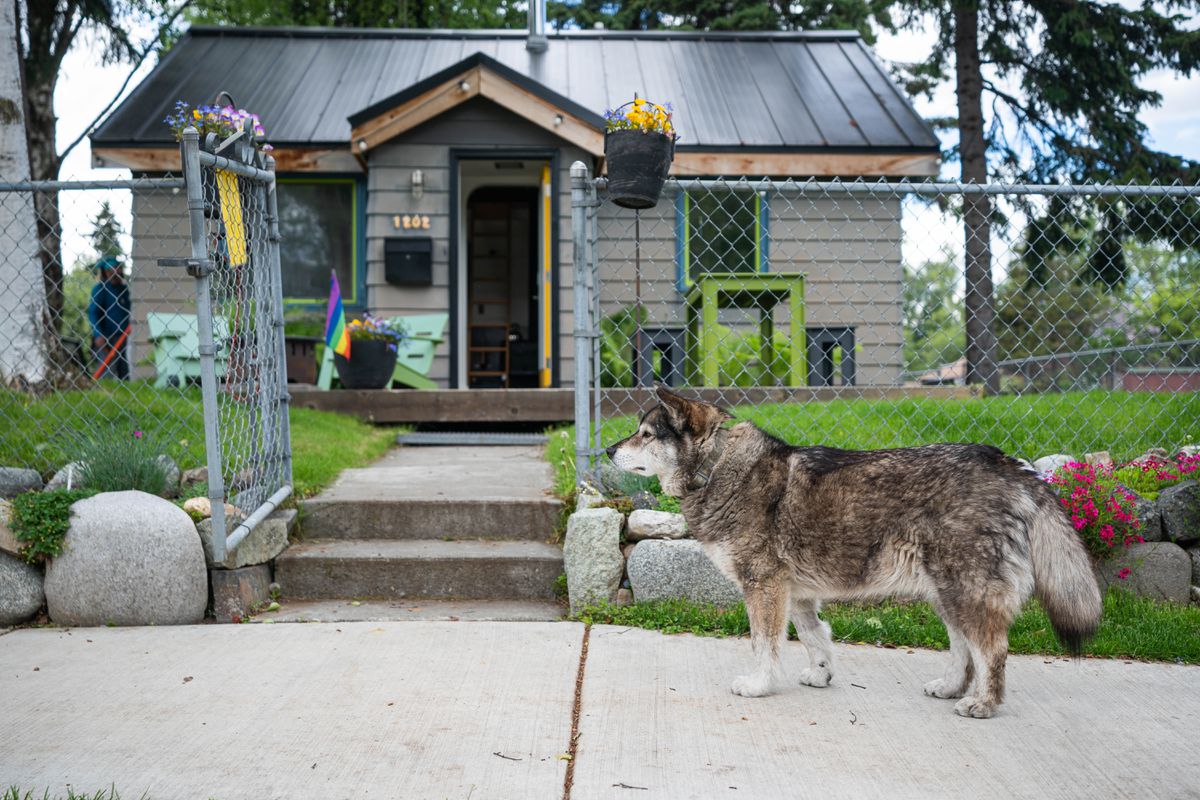 Update, Oct. 7: Newtok, the Anchorage dog who provided canine relief during the difficult time of this coronavirus pandemic, died at home on Tuesday evening. Owner Tonio Nguyen said Newtok outlasted cancer five months longer than expected “because of all the love and energy" he received from scores of visitors who sat quietly with him through summer into fall.

Read more about Newtok’s story in the story below, originally published on July 5.

A dying, 40-pound furry Buddha of a dog adopted from a Bering Sea coast village 10 years ago is bringing unconditional love to Anchorage’s South Addition neighborhood.

He’s attracted legions of fans who end up connecting with the dog but also with one another.

The time to visit is growing short. Newtok was diagnosed with terminal cancer in May.

People have always been drawn to the dog in the yard with thick fur and understanding eyes, said his owner, Tonio Nguyen, who found Newtok alone and wandering the tundra on a work trip to his namesake village.

Newtok looks like a miniature, compact wolf. He’s been compared to a cross between a husky and a koala bear. He’s irresistibly cute.

But now, with national racial unrest and a pandemic unsettling daily lives, the visits seem different, crucial in a way they didn’t before.

Nguyen says his dog has a compassionate and calming presence that draws people close and calms them. People come to pet Newtok or even talk to him. Kids brush him. Many visitors just come and sit quietly at his side.

“There’s one nurse, she is dealing with the coronavirus pandemic. Every day right after work, she swings by. She still has her scrubs on,” he said in an interview late last month. “I think people are kind of seeking some — just comfort, I guess.”

In May, a friend found a lump on the side of Newtok’s face. The vet diagnosed stage 4 melanoma that had spread into the dog’s bones, glands and body.

“They told us he had three weeks to live,” Nguyen said in late June. “That was six weeks ago.”

He and his partner, Derek Hert, posted a sign addressed to “FRIENDS OF NEWTOK” on the fence outside with the sad news and a leash hanging nearby: “We invite you into the yard anytime to take him for a walk, sit with him, or give him a scratch or hug. I know he means a lot to many people and has a deep connection to many of you. As a stray, Newtok came to us from the Western Alaska village of Newtok. We view this as his ‘return’ home.”

Newtok’s local fame began as soon as he arrived in the big city a decade ago. He was still a wild dog, Nguyen said, and ran off. Photographer and neighbor Clark James Mishler photographed Newtok while he was missing and posted the portrait on social media to find the dog’s owner.

Nguyen said he asked friends if they’d seen his missing dog. Sure, they said. He’s on Facebook. Mishler asked to do another photo shoot with Newtok the next day.

Hundreds of people have come by to visit in the years since.

Tracy Briggs and her husband moved from Kosovo to the house next door last fall.

“Newtok is one of those dogs who immediately makes you love him just from his sheer happiness, sweetness and love of life,” Briggs wrote in an email. “Everyone in the neighborhood and beyond instantly falls in love with him including friends we had who visited us in late March of this year from Britain, Canada and Slovakia enough to wish that they could take him home with them.”

The sign that appeared after Newtok’s cancer diagnosis prompted a remarkable stream of new visitors, some who didn’t know Nguyen or live in the neighborhood, Briggs said. One young girl is particularly in love with Newtok.

“I know that this gives her much love and strength during this crazy and isolating time,” she said.

In one 30-minute period on a mid-June day, Newtok received six visitors: a neighbor who likes to sit with him on a bench installed for that purpose; Chance, the dog; two people who came by to say hi; a neighbor who takes Newtok for a walk and some ice cream at Side Street Espresso; and a 9-year-old, probably the girl Briggs described, who visits several times a day and borrows Newtok to play with him.

Nguyen this week said Newtok’s tumor has grown quite large, but his energy and spirits remain high.

He still waits out there in the yard, a furry little sentinel.

“What’s so interesting is he doesn’t do anything. He doesn’t do tricks. He just sits and listens. And he has this presence and he’s nonjudgmental,” Nguyen said. “I think that’s what we all are looking for, is just someone to be present for us.”