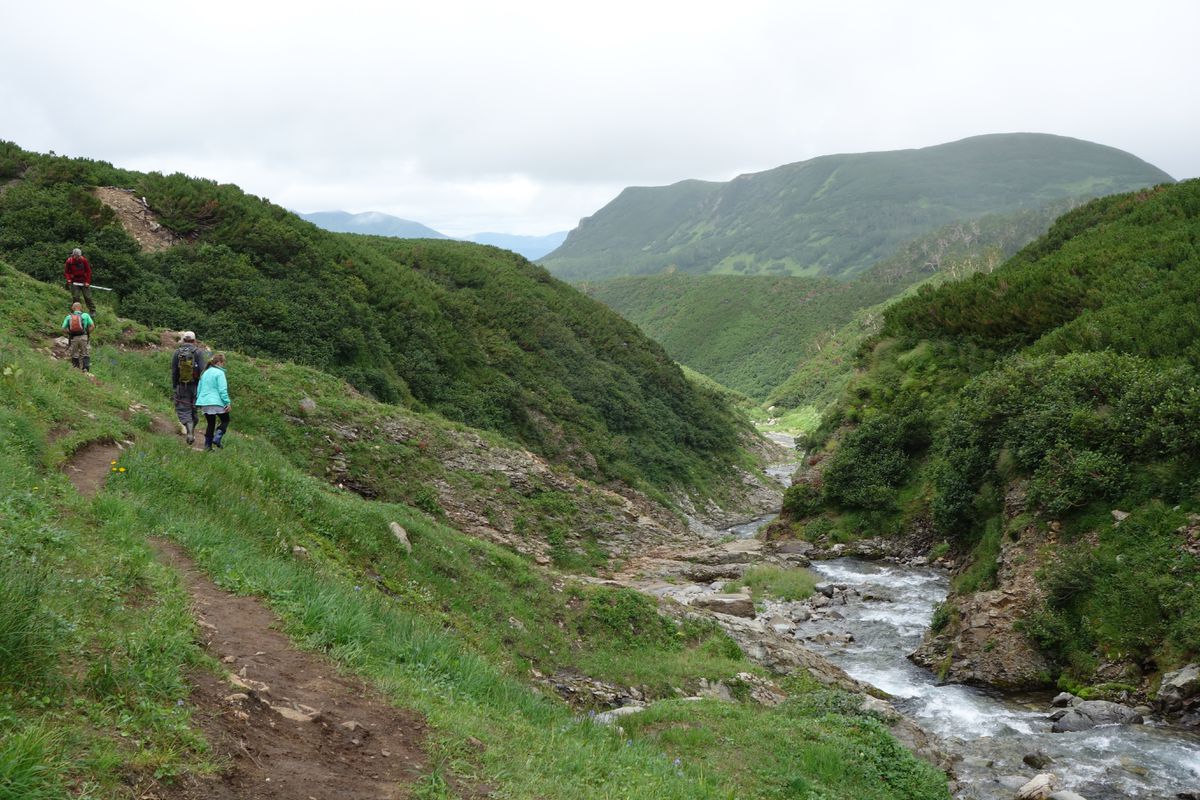 Hiking up the river valley in the Kamchatkan nature preserve. (Scott McMurren)

Hiking up the river valley in the Kamchatkan nature preserve. (Scott McMurren)

Travelers who want a wild adventure often come to Alaska. Some of us end up staying to explore the Last Frontier.

But what's the next big thing for adventure travel? Who has bigger fish or more live volcanoes or more undiscovered country?

If you ask Martha Madsen, she will answer "Kamchatka." Madsen has a small guest house near Petropavlovsk-Kamchatsky on the Kamchatka Peninsula. This is the port where Vitus Bering set out with two boats to explore Alaska and claim it as "Russian America" in 1741.

The Russian Far East, including Petropavlovsk-Kamchatsky or "PK," has seen its share of airlines trying to build a bridge to Alaska. Alaska Airlines served several destinations in the 1990s, including Magadan, Khabarovsk and Vladivostok. Currently, Yakutia Airlines flies the Anchorage-PK route once each week on Mondays (through Aug. 29).

Before settling in PK, Madsen was a curator for the Pratt Museum in Homer, where she helped coordinate an exhibit of Bering's journey to Alaska 250 years before. A chance meeting in the Homer harbor with a group of Russians aboard a sailboat led to a reciprocal visit to PK, where she met her future husband.

Madsen is the only American living on the Kamchatka Peninsula.

"I've felt isolated, but I don't feel in danger," she said. "The people here don't hold me responsible for US-Russian relations. I'm respectful of the Russians' point of view."

"These flights are great for adventuresome anglers who love to fly-fish," he said.

Fly fishermen (and women) make up the biggest single segment of travelers on the weekly flights. Other travelers include local governmental officials, fisheries scientists and biologists, hunters and wildlife photographers.

"The anglers are after the big rainbow trout," Dudley said. After arriving in PK, fishermen usually will spend the night and leave the next morning by helicopter to start a float trip or go to a lodge on one of the rivers. Most of the anglers are booked through fly-fishing shops such as The Fly Shop in Redding, California.

The air tickets cost between $1,080 and $1,860 depending on how long you're staying. But travel in Russia is very reasonable because of the favorable exchange rate. To stay at Madsen's guest house, it's $60 per person per night, which includes a delicious breakfast. Her home is just 15 minutes from the airport and about 35 kilometers from downtown PK. Madsen said the public transit system is cheap and efficient, but I opted for a taxi, since I cannot even read the bus number in Russian. The taxi cost $17.

Wi-Fi hotspots are available in some businesses and restaurants. Although it's slow, you can work through basic email, text, Facebook and Instagram functions.

Because Kamchatka, like Alaska, is on the "Ring of Fire," travelers can choose from one of several tours to see active volcanoes. You can book a two-day trip and camp near the top of the mountain. Other unique trips include helicopter daytrips to the "Valley of the Geysers" and to Kuril Lake to see bears.

It's best to plan ahead for a trip to Kamchatka, as a Russian tourist visa is required in addition to your passport. Air Russia has a special web page devoted to getting a visa. I had to work up an itinerary in advance with Madsen and Diligans Kamchatka in order to complete my visa application. Then, all the documentation, along with a passport photo and a certified check or money order, needs to be submitted to the Russian Consulate in Seattle.

Dudley recommends you get your visa approved before buying your airline ticket. The cost is the same for a single-entry visa as for a three-year multiple-entry visa: $278. The standard turnaround time is 10 calendar days, but you can pay more and get it within three business days.

Part of any international voyage is meeting the people and getting to know how things work. Your introduction to Russian systems begins with the visa application. Once you board your flight in Anchorage, you'll receive your "migration card" to fill out. Then, on arrival in PK, there is the lineup at passport control. After the passport officer reviews your documents, they will stamp them and detach one half of the migration card. Keep it with your passport and don't lose it. You will need to present it at your hotel or guest house so they can make a copy.

If you have an "unlocked" smartphone, you can get a local SIM card at the airport or a local store. Note: you'll need to provide your passport, your visa and your "migration card" to get the SIM card. After filling in the information, the clerk will stamp the form twice for their file and twice for you. There is a saying in Russia: "Without a stamp, you're not a person." A SIM card from "Beeline," which included 1 GB of data and a generous allocation of local calls and worldwide texts, was less than $6.

You can use your debit card to withdraw funds at ATMs, although some ATMs will only dispense 5,000 rubles per transaction (about $75). Alternatively you can go to the bank and exchange currency. Take care to bring brand-new $100 bills, though. Two travelers made special reference to this. "No folded corners, rips or writing on the bills," one of them cautioned. I asked my teller to go back in the safe and get brand-new bills for me!

Even though Kamchatka enjoys similar topography to Alaska, the culture is totally different. PK is a commercial fishing center, with a large regional port. Along with new bank buildings and car dealerships are statues of Lenin and other reminders of the former Soviet regime. On the hill overlooking the bay, there are replicas of cannons used to repel an Anglo-French invasion in 1854. In addition to the fishing fleet, PK hosts a big military presence since it has been a strategic port since Bering first sailed from here in 1741.

Kamchatka is a world away, on a different continent. You cross the international dateline during your four-and-a-half-hour flight. And there's no question you're in a foreign country; just try and make out that Cyrillic text!

Right now, though, Kamchatka is Alaska's gateway to Russia and Asia — and it's just across the Bering Strait.