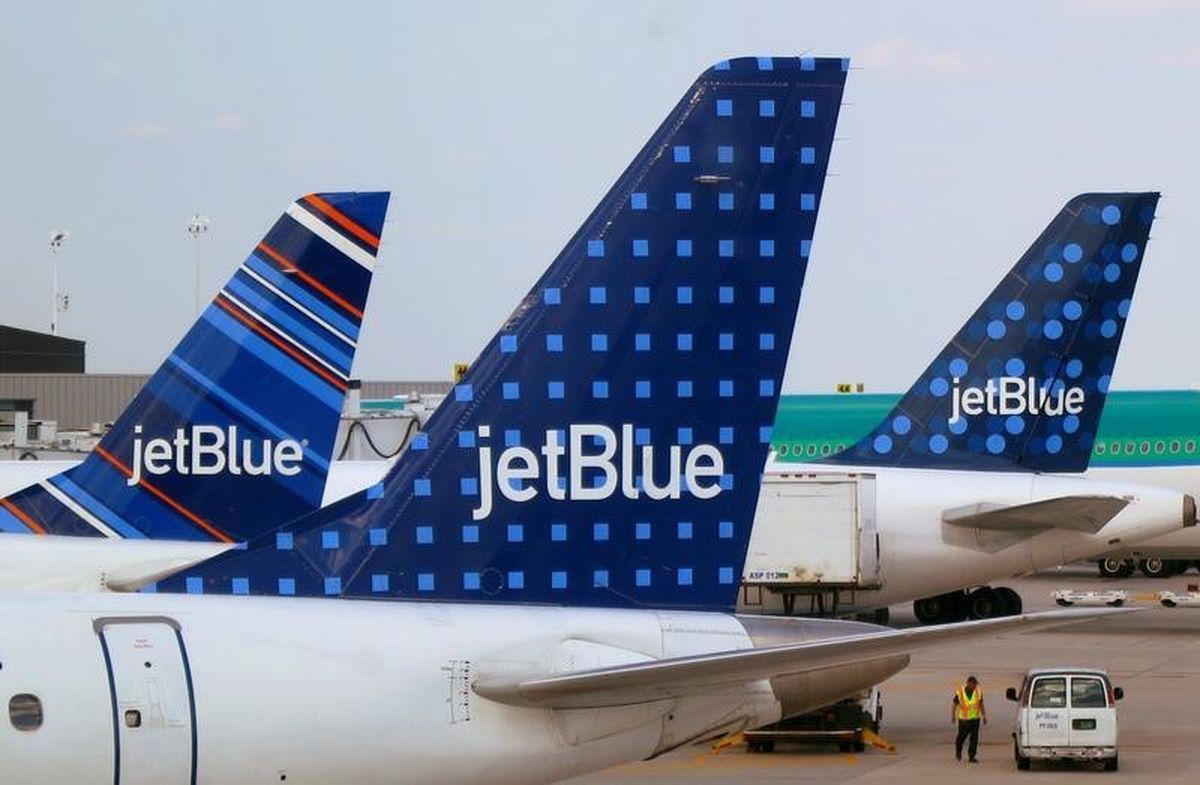 JetBlue Airways will start service from Anchorage to Portland and Seattle on May 25. REUTERS/Fred Prouser/File Photo

JetBlue Airways will start service from Anchorage to Portland and Seattle on May 25. REUTERS/Fred Prouser/File Photo

If you're looking for a good deal on an airline ticket, it helps if there's more than one airline flying the route. Travelers in Anchorage and Fairbanks are lucky, since Alaska is very popular with travelers in the Lower 48. That means that the biggest airlines are adding flights for the summer.

The next time you stroll through the Ted Stevens Anchorage International Airport, you might think it's dominated by Alaska Airlines. After all, the entire "C" Concourse has nothing but Alaska flights: nonstops to Seattle, Portland, Los Angeles, Honolulu and points around Alaska.

But if you take a walk down the "B" Concourse, there are all sorts of different logos on the wall. Delta Air Lines flies twice each day between Anchorage and Seattle and once a day to Minneapolis. Right now, the Atlanta-based airline is ramping up for a big summer.

"We're committed to our partnership with the state of Alaska," said Tony Gonchar, Delta's vice president for Seattle. "Overall, we're seeing a 4 percent increase in available seats this summer. That's primarily because we're adding a sixth daily nonstop flight between Anchorage and Seattle for the summer."

Compare that to Alaska's 19 daily summertime flights between Anchorage and Seattle. On the drive out to the airport, you can see a giant airplane hangar being constructed: Alaska Air is spending about $50 million to accommodate two Boeing 737 "MAX 9" aircraft side-by side. The hangar is 105,000 square feet and will be completed by the end of the year, according to Marilyn Romano, Alaska Airlines vice president for Alaska.

Alaska's 737s are doing more flying within the state, since Horizon Air is pulling its Q400 prop-planes. Since the 737s have more seats, there will be about 28 percent more available seats between Anchorage and Fairbanks.

While both Alaska and Delta are ramping up service in Anchorage, they are also adding capacity and infrastructure in Seattle. Alaska Air is building out the "N Gates" at Sea-Tac — you can't miss the big construction project when you fly through. In addition to that, Alaska is super-sizing its lounge in the N terminal — making it 15,000 square feet, with a rooftop view. When completed, the North Terminal will host 20 gates.

Delta's big push in Seattle is to bring more domestic traffic in to feed the international flights operated by Delta and its partners: Aeromexico, KLM, Air France and Virgin Atlantic. "Sea-Tac still is the nation's fastest-growing airport," said Delta's Gonchar. "The new international arrivals terminal will double the throughput. There won't be any waiting for customs. And a new skybridge between the "S" gates and the "A" Concourse means travelers will not have to go through security again," he said.

Right now, United Airlines offers one flight per day: a nonstop from Anchorage to Denver. That changes on March 8, when United resumes its daily nonstop flight from Anchorage to Chicago. Jonathan Guerin, Sr., United's senior manager of public relations, shared the additional flights the airline will add on June 7:

American Airlines is returning to Anchorage on June 7, offering a nonstop flight from Anchorage to Los Angeles/LAX. Also on June 7, American resumes its seasonal daily nonstop between Anchorage and Dallas on a 757. "All of our 757s will be retired within a couple of years," said Vasu Raja, American's vice president of network and schedule planning. Newer, single-aisle aircraft like the 737MAX will take over some of the old 757 routes. On June 7, American will resume its daily 737 service from Anchorage to Phoenix.

JetBlue Airways is returning to serve Anchorage from both Portland and Seattle, starting May 25. Count on JetBlue to offer great prices. Right now, there's a $94 one-way fare from Anchorage to Seattle. Delta has matched the rate.

Sun Country Airlines is resuming its nonstop flights from Minneapolis on May 18. Starting May 26, Sun Country will be offering two nonstop flights to Anchorage. Sun Country moves from weekend-only to daily flights on Friday, June 1. The second daily flight only will operate on Saturdays throughout the summer, according to Jim Szczesniak, airport manager at TSAIA.

Air Canada has some nice prices on its daily nonstop from Anchorage to Vancouver, B.C., starting May 11. The one-way fare is $183. Air Canada is a member of the Star Alliance with United Airlines. It's the closest thing United frequent flyers have to a nonstop to Seattle!

Icelandair, a mileage partner with Alaska Airlines, starts twice-weekly nonstop service from Anchorage to Reykjavik on May 14. Condor, the German airline that flies from Anchorage nonstop to Frankfurt, starts flying twice a week on May 19. On June 9, Condor increases its flights to three times a week. Condor also is an Alaska Airlines mileage partner.

Yakutia Airlines flies once each week from Anchorage to Petropavlovsk-Kamchatsky in Russia between July 16 and Sept. 3. The plane continues on to Yakutsk. The airline operates a 737-800 on the route and is popular with anglers who love to float the rivers on the Kamchatka Peninsula.

Particularly in the summer, Anchorage and Fairbanks enjoy air service that is more typical for a destination three or more times its size. That means more options and better prices for travelers.

Note: An earlier version of this column included incorrect starting dates for American Airlines flights from Anchorage. All the flights start on June 7.