In San Francisco, you don’t have to leave the airport to visit a museum 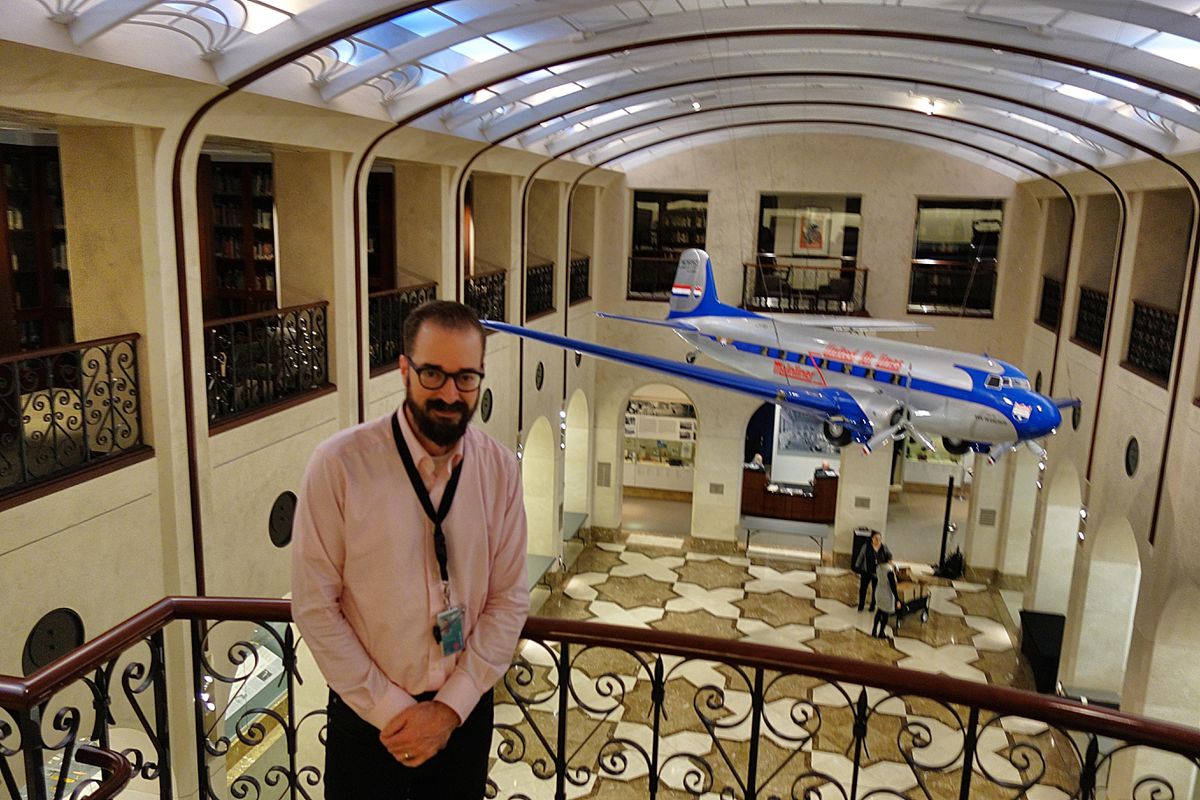 Tim O’Brien, assistant director of the SFO Museum, shows off the large-scale model of a United DC-3 “Mainliner.” It hangs in a replica of the airport’s original terminal building in 1937. (Photo: Scott McMurren)

Tim O’Brien, assistant director of the SFO Museum, shows off the large-scale model of a United DC-3 “Mainliner.” It hangs in a replica of the airport’s original terminal building in 1937. (Photo: Scott McMurren)

The next time you take a flight from Anchorage, you won’t be able to miss the new bronze sculpture between the B and C concourses. Sitting on a bench is a life-size model of the late Sen. Ted Stevens, for whom the airport is named.

The sculpture, by Joan Jackson, is the latest in a series of beautiful artworks at the airport. Stroll down the B concourse and you’ll see a flock of oversized geese flying overhead by Rachelle Dowdy.

Other airports have beautiful works of art, to be sure. But San Francisco International Airport, or SFO, has pushed this theme to a high art form. The SFO Museum is the only airport-located museum accredited by the American Alliance of Museums, according to Assistant Director Tim O’Brien.

There is a replica of the original terminal building at SFO in 1937, which houses a number of exhibits in International Terminal A outside the security checkpoint.

Bill Lex, a museum volunteer, guided me through the permanent exhibit on Pan Am’s fabled China Clipper service between 1935 and 1946.

"Usually, people think of the China Clipper as just one plane,” said Lex. “But there were three planes that flew these trans-Pacific island-to-island itineraries,” he said. The most iconic was the Boeing 314. But the Martin M-130 also flew the routes, as well as the Sikorsky s-42.

SFO Museum features large models on display of all three Clippers, in addition to a nine-foot metal prop from one of the flying boats.

Also on display this month are scale models of almost 300 aircraft, meticulously crafted by San Francisco’s Jim Lund. Lund made all the models at a 1:72 scale, where one inch is equal to 6 feet. Lund’s exhibits help document the evolution of aviation — from the Wright Brothers’ plane in 1903 to the Concorde SST, the 747 and all major airliners and cargo planes in between. All of the models feature accurate paint and livery. This is “AvGeek” heaven. There’s an accompanying photo display of the models, set up with miniature terminals and passengers.

The biggest airplane model hanging from the ceiling is a DC-3 replica, a United Airlines “Mainliner.”

“It was the DC-3 which really opened up cross-country air travel,” said O’Brien.

In addition to the aviation displays, the museum has a number of exhibits which feature modern design or are historically significant.

On display now is a huge exhibit on cats, called “Caticons: The cat in art.” The collection is on loan from Sandy Lerner, who has searched for examples of cats in sculpture, textiles and decorative art for many years.

Another large exhibit which also is available outside the security checkpoint features classic surfboards made from hardwood. “It’s essentially a chronological display of the history of surfing and includes replicas of old Hawaiian boards,” said O’Brien.

Only a small number of the museum’s displays are available to view outside of security. Take a walk through Terminal 2, home to Alaska Airlines’ new hub (since their takeover of Virgin America) and you’ll see a display of old manual typewriters, as well as an interactive exhibit of Arhoolie Records and its “downhome music.”

Another exhibit in the “A” terminal is a mini-theater where the museum runs four short films (no more than 15 minutes). The films come from different countries—some are animated and some are documentaries. The movies get swapped out every four weeks.

“We understand that when travelers get to the airport, they’re stressed,” said O’Brien. “So here at the museum, we want to offer some chances to unplug and relax.”

Andrew Harrison, Alaska Air’s executive vice president, was at the airport to show off some of the airline’s new art: the all-new interior of one of the Virgin America A321s. The interior had all-new seats and exuded a leathery “new plane” smell. On display at the gate were new uniforms, new seats and new food choices for flights from San Francisco. When asked if Alaska planned to resume nonstop service to its new hub at SFO, Harrison said “Yes. San Francisco is a hub and Anchorage is a hub—and we fly hub to hub.”

Alaska Air also is building a new lounge on the third floor of Terminal 2, which will be completed next year.

So whether you’re flying to San Francisco on vacation, or to pick up an international flight across the Pacific, take some time to soak in the art from the SFO Museum.