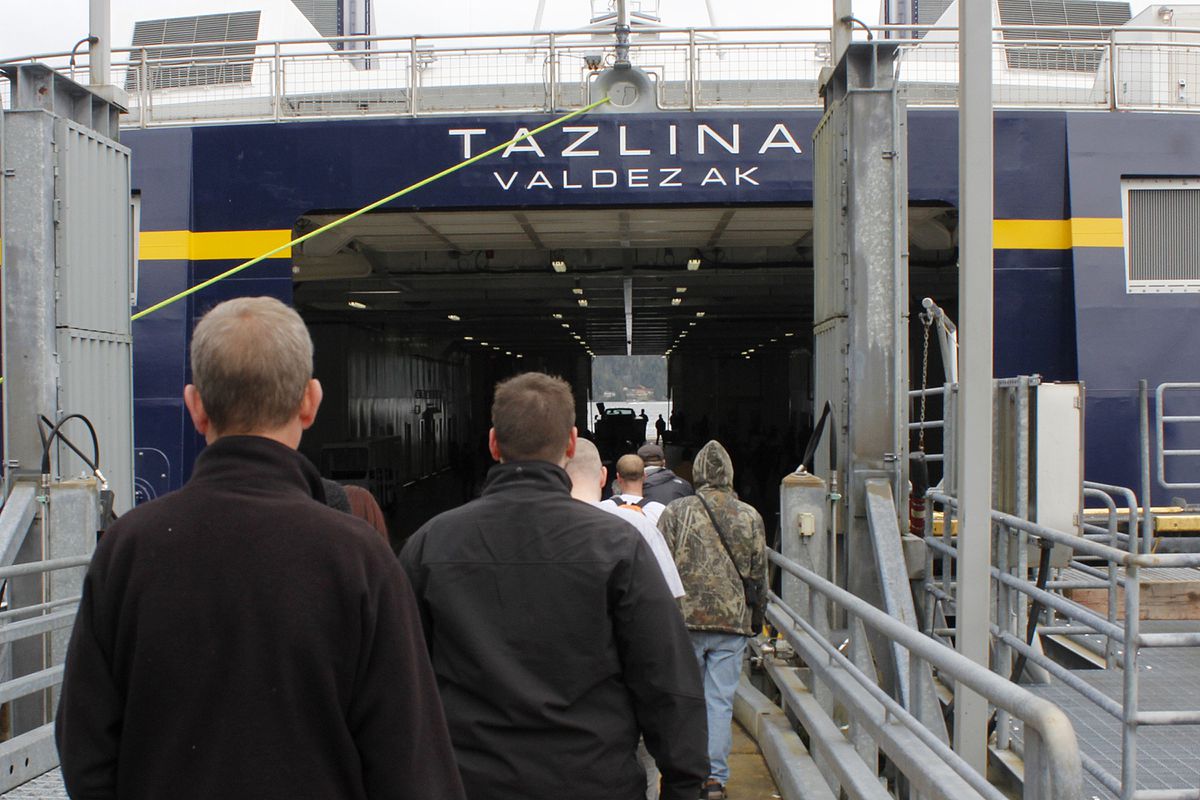 People walk onto the ferry Tazlina on Sunday, May 5, 2019, in Juneau, Alaska. More than 800 people toured the newest Alaska state ferry Sunday, even though the entire Alaska Marine Highway System faces an uncertain future. (Alex McCarthy/Juneau Empire via AP)

People walk onto the ferry Tazlina on Sunday, May 5, 2019, in Juneau, Alaska. More than 800 people toured the newest Alaska state ferry Sunday, even though the entire Alaska Marine Highway System faces an uncertain future. (Alex McCarthy/Juneau Empire via AP)

The Tazlina is the newest ferry for the system, designed to operate in the rough waters of Lynn Canal, the Juneau Empire reported.

The ferry is scheduled to make its maiden voyage Tuesday. According to the Department of Transportation’s web site, the 280-foot ferry can carry up to 300 passengers and up to 53 vehicles.

The Tazlina will make day runs, beginning by going from Juneau to Haines. It then will go from Haines to Skagway and back. The ferry will overnight in Haines.

The following day, it sails to Skagway, back to Haines and then to Juneau. It will repeat this cycle three times a week.

There are no crew quarters aboard the Tazlina, so it can only sail in 12-hour increments.

Republican Gov. Mike Dunleavy’s administration plans to weigh an overhaul of the entire state ferry system aimed at limiting state support. No ferry reservations are being taken beyond Oct. 1.

The state Senate has proposed limited winter service to keep the ferries running.

Mary Siroky, the transportation department’s deputy director, said under the Senate’s plan, the runs that make the most money would get the most service this winter. She said the most lucrative runs are the ones from Bellingham, Washington, while the ferry runs to smaller Alaska coastal communities are at the opposite end.

"Frankly, the village runs don't make a lot of money, so those communities will probably see a little less service," Siroky said.

The administration has contracted for a study with Northern Economics to determine the best way forward for the ferry system.

The new ferry is impressive, but Rep. Sara Hannan, D-Juneau, said she couldn't help but worry about the future of the marine highway system.

"It's something new and sparkly, so that's great," Hannan said, "and making sure we continue to have great service up Lynn Canal. That's great, but there are mixed emotions around the long-term planning and what we're going to do and how we're going to serve the region."

Christopher Coutu of Juneau toured the ferry Sunday with his wife and children. He said Sunday’s event served as an example to lawmakers of how vital the boats are to those who live in coastal, roadless areas of the state.

"At a time where they keep talking about budget cuts and budget cuts for the ferries, it's really good to see investment in the marine highway system," Coutu said. "It's important, and I think the turnout today shows how important it is."

The Tazlina is the first of two Alaska Class ferries for the system. The second, the Hubbard, will operate out of Prince William Sound, also as a day boat. It will begin service in summer 2020, said transportation department spokeswoman Aurah Landau.