In Eugene, Oregon, a good mood is ‘just a bike ride away’ 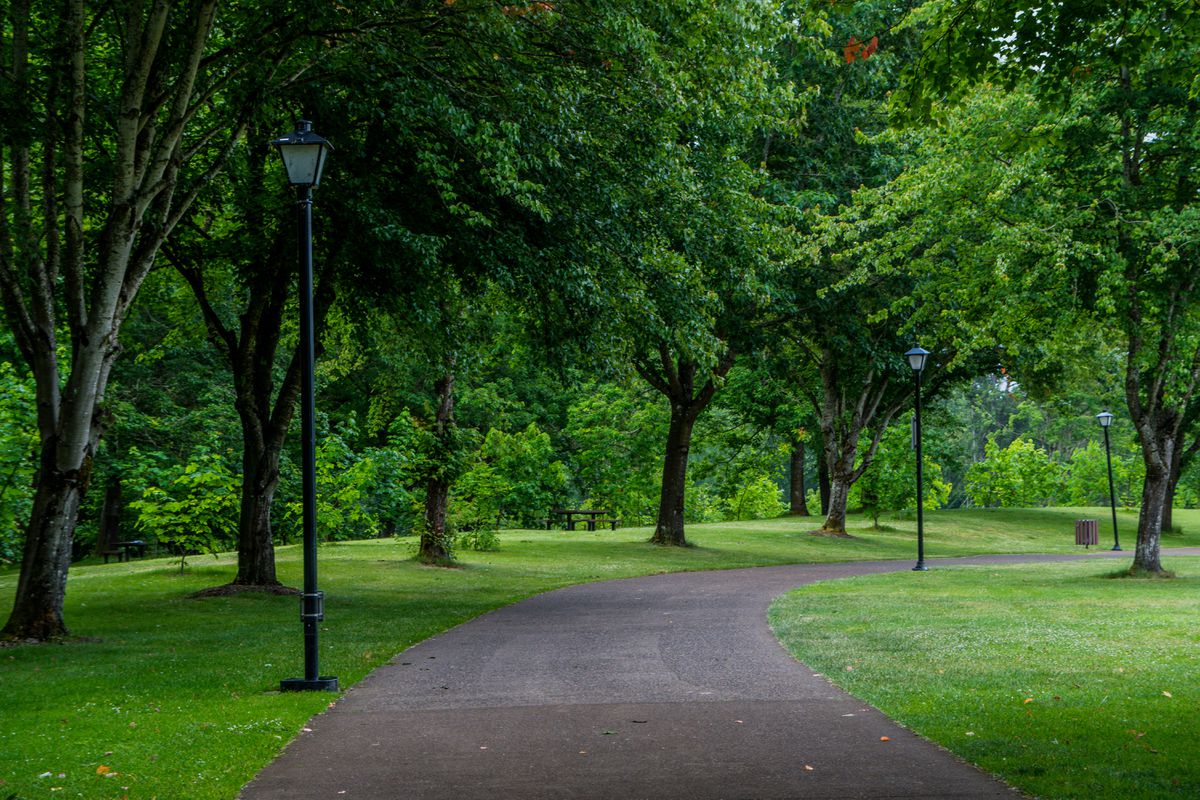 Concrete footpath in a park in Eugene, Oregon. (Getty Images)

Concrete footpath in a park in Eugene, Oregon. (Getty Images)

On a trip around the world two years ago, I only had to rent a car once: in Oakland. The airport was about 75 miles from Gracianna Winery in Sonoma County. I had to drive over to pick up a couple of bottles of pinot noir to take to London.

In all the other stops, including Barcelona, Hong Kong and Kuala Lumpur, I relied on public transit. Here in the U.S., it’s easier to get around some of our favorite cities using buses and trains. I’ve gone without cars in Portland, Seattle and San Francisco.

You can’t always pull the public transit card, though. But sometimes, instead of renting a car with four wheels, you can rent a bike with two wheels. That’s what I did last week in Eugene, Oregon.

According to Virginia Xing, co-owner of Bicycle Way of Life, Eugene is on the short list of top bike rental destinations in the U.S. “We’re No. 7 on the top 10 list, which includes Seattle, Minneapolis and Ft. Collins, Colorado,” she said.

The Willamette River runs right through the middle of town, and there are bike trails on either side. The bike craze was in full swing when I lived there 40 years ago. But today there are more trails, more bike/pedestrian bridges and a bigger population of cycling enthusiasts.

In fairness, I did take a cab from the airport to my sister’s place in downtown Eugene. But after that, it was pretty much all bike after that. It’s a short ride to Autzen Stadium, home of the Fighting Ducks from the University of Oregon. There are a bunch of restaurants and cool shops in and around the 5th Street Public Market. It’s just across the Willamette River from my sister’s house, easily accessible via the bike/pedestrian bridge across the river and the bike trails.

At the bike shop, I picked out a road bike, which costs $48 for the first day and $16 each following day ($72 for the week). Compare that to a rental car at the airport: $62 per day for a Ford Fiesta from Avis.

“A good mood is just a bike ride away,” said Xing, who got into cycling at the advice of her doctor. “Biking was a fitness solution for me,” she said. “And I haven’t stopped since I was 41 — about 10 years ago. I average about 1,000 kilometers per month."

In addition to traditional road bikes, which are great for the paved trails, Bicycle Way of Life also offers mountain bikes and hybrid bikes for rent.

On their website, Bicycle Way of Life has maps of the bike trails in and around Eugene. The closest trails are along the river — and there is a beautiful 15-mile ride along both banks. My sister and I rode that route on the first day I was there. It took me a little while to get used to the high-tech bike. The normal gear shifters now are embedded in the brake handles. The pedals are designed for clip-in shoes instead of the old-school toe-clips. When you’re picking up your bike, you can ask for regular pedals without the fancy clip-ins, though.

The trail along the river is relatively flat, unless you want to take a detour up to the top of Skinner’s Butte, which looks over the downtown area.

If you want to go for a longer ride, there’s a 49-mile ride that goes to three wine-tasting rooms in the Lorane Valley. Or, take a tour through the surrounding hills on what Xing calls the “leg crusher tour” out to the neighboring community of Crow.

Eugene’s unique setting near the top of the Willamette Valley offers many beautiful rides — in the mountains or on the flats. It’s easy to take the trails to the edge of town before getting on to the less-busy roads.

Xing said that more people are renting bikes, especially during the popular summer months. Sometimes, if they’ve rented out the whole fleet, the employees will rent out their own bikes. “Hey, we enjoy it. Why not share it?” she said.

If you don’t want to rent a bike for a whole day, you can pick up one of the PeaceHealth bikes that are parked all over town. These baby blue bikes are heavier than the sporty bikes from Bicycle Way of Life. They’re similar to other bike share units in Seattle and San Francisco. The cost is $1 for 15 minutes.

True confession: Riding around Eugene and neighboring Springfield was nostalgic for me. While attending school at the University of Oregon, I lived near campus and it was an easy ride to school and work every day. For four of the last five years I lived there, I didn’t own a car — just a bike.