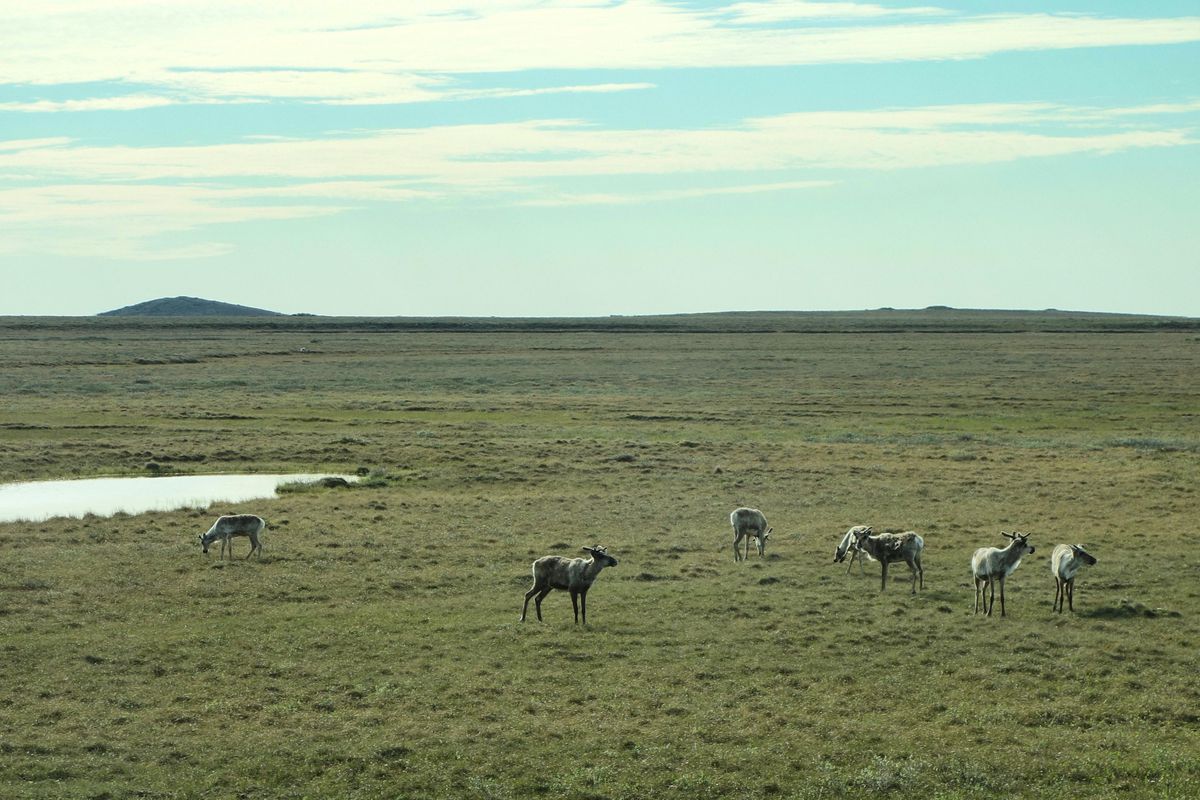 A small group of caribou sighted from the road on the way to Prudhoe Bay. (Photo by Scott McMurren)

A small group of caribou sighted from the road on the way to Prudhoe Bay. (Photo by Scott McMurren)

It’s always fun to see critters in the wild on your Alaska adventures. Driving down the Seward Highway, it’s not uncommon to see cars pulled over and travelers looking up at the cliffs for sheep. Or, even before leaving town you can see the birds and fish at Potter Marsh from the boardwalk.

But one road, which was built for something else, offers adventurous travelers a chance to see lots of different animals in an amazing setting.

The Dalton Highway starts 79 miles north of Fairbanks at Livengood. This is the “Haul Road” that parallels the trans-Alaska pipeline. From Fairbanks to Prudhoe Bay, it’s about 500 miles.

The first half of the drive is beautiful and includes the Yukon River crossing, a stop at the Arctic Circle sign and some other viewpoints to stretch your legs.

But the second half of the road offers the big surprise: a bunch of critters.

“May and June are the best months to see wildlife,” said Matt Atkinson of Northern Alaska Tour Co. “We don’t make a big deal about the wildlife because it’s not guaranteed. They’re wild, after all,” he said. “Even so, you’re bound to see something on the trip to Prudhoe Bay.”

That “something” included Dall sheep, caribou, musk ox and a variety of migratory birds.

After spending the night at Coldfoot, we got up early for the all-day push to the North Slope. Our first big wildlife sighting of the day was a big moose at the base of Mount Sukakpak. He was standing knee deep in a lake, just munching away.

Then we started the long climb up to the Chandalar Shelf, which is above the tree line. That means you can see for miles and miles on a clear day. There still was a little snow in the shadows and the mosquitoes were not bad. That’s because there was a brisk 20 mph breeze.

From Chandalar, you start the big climb up to Atigun Pass, the tallest road pass in Alaska. At 4,738 feet, the pass is at the continental divide. Water on the Chandalar side flows into the Yukon, and north of the pass it flows to the Arctic Ocean.

Right after crossing the pass, there’s a big pullout. You can look north over the valley or scan the hillside for sheep. This is where we saw our first eight Dall sheep. They were little more than white specks on the hillside, but with binoculars or a good camera lens, you could bring them into focus.

It was hard to miss our first group of musk ox. They were right by the road. At first, we thought there were five, but then two babies appeared from behind their mothers.

We spotted some more sheep in the hills after we stopped at a campground for lunch.

As we made our way off the north slope of the pass on to the Arctic Plain, it wasn’t summer any more. It was still late spring. The grass was brown and there were no mosquitoes. It was sunny, but chilly. That’s where we saw our next big group of musk ox, wandering between the road and the pipeline.

But after the landscape flattened out, that’s when we started seeing the caribou. First, just one or two. Then three or four — with a couple of babies. Then there were so many I couldn’t count them. But one of the other folks did — and she claimed we saw more than 400. That included all the brand-new babies who were born in early June.

I was preoccupied with the mammals visible from the van, but there were a couple of bird watchers who kept pointing out tundra swans, geese, brant and other migratory birds.

You can drive the road. It’s open to the public. We saw plenty of private cars, along with a bunch of bicycles and motorcycles. My heart went out to the cyclists, as there were spots where the wind was really howling. But the biggest users of the road are the long-haul truckers. They are moving big loads and heavy supplies back and forth between Prudhoe Bay and Anchorage and Fairbanks.

Travelers should be prepared if they drive their own car on the road. It’s not paved — and it is bumpy in spots. Very bumpy. There’s no cell service — truckers still use the old-fashioned CB radios to communicate. There are two places to get gas on the way to Prudhoe Bay: at the Yukon River crossing, 137 miles north of Fairbanks, and in Coldfoot, 240 miles south of Prudhoe Bay.

Two companies rent cars and trucks that are rated for the Dalton Highway: Arctic Outfitters and GoNorth Alaska Travel Center. Arctic Outfitters rents specially outfitted Ford Escapes starting at $199 per day during peak season. GoNorth offers Jeep Cherokees, but they also have campers that fit over Ford F-350 pickups. Rates start at $207 per day with a seven-day minimum rental.

Northern Alaska Tour Co. offers its “Arctic Ocean Adventure” in their 10-passenger van. Your guide does the driving up to Prudhoe. Then, you catch a flight back from Prudhoe Bay to Fairbanks. Overnight accommodations in Prudhoe Bay and in Coldfoot are included, plus a tour to the Arctic Ocean so you can go swimming (or dip your toe in). The trip also is available on a southbound itinerary, where you fly north first, then go south in the van.

This trip was designed around a couple of “bucket list” items for visitors: crossing the Arctic Circle and swimming in the Arctic Ocean. You can get your certificate, that’s for sure. But the chance to see all the wildlife is a big bonus!