Everyone’s got their go-to Seattle spots. Here are a few more. 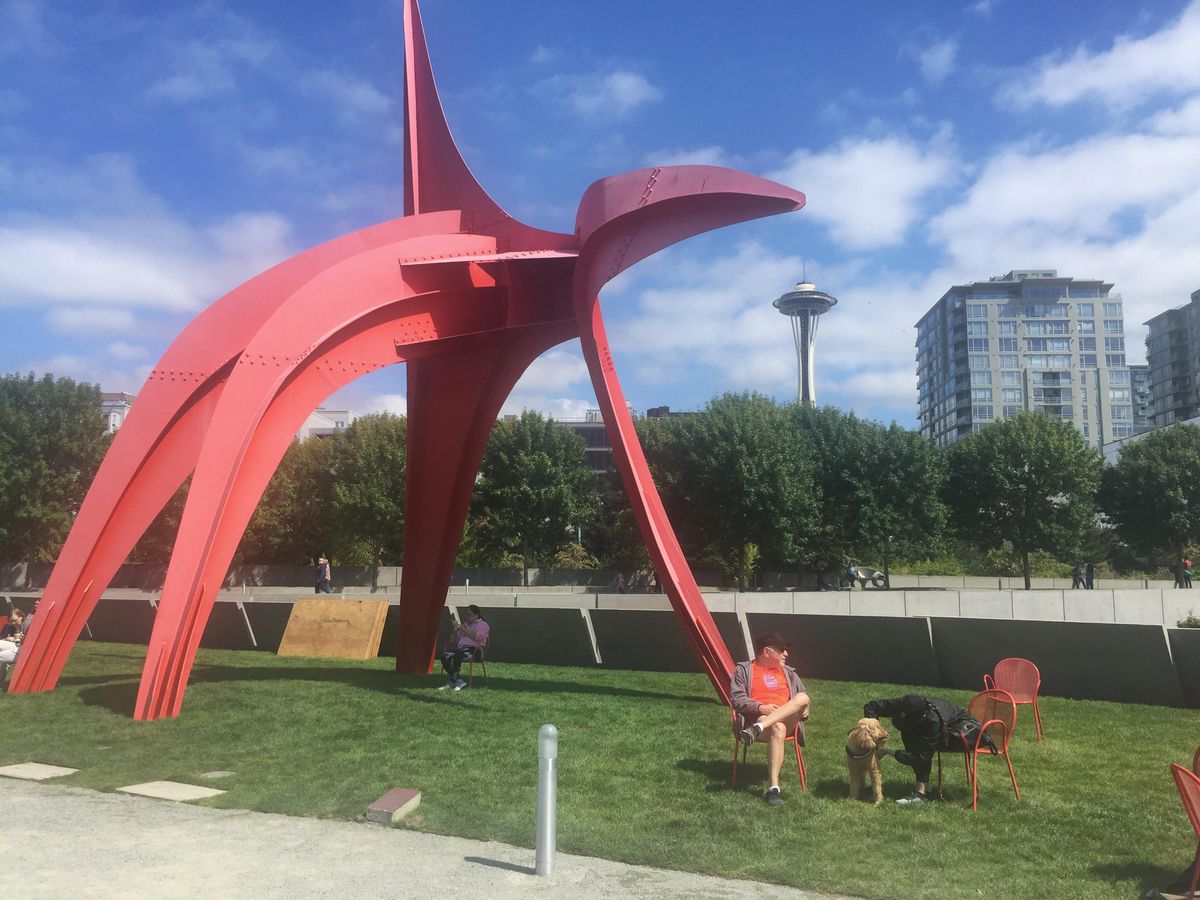 “The Eagle” by Calder is one of the sculptures on the waterfront at the Seattle Art Museum’s Olympic Sculpture Park. (Photo by Scott McMurren)

“The Eagle” by Calder is one of the sculptures on the waterfront at the Seattle Art Museum’s Olympic Sculpture Park. (Photo by Scott McMurren)

I never miss a chance to visit the Emerald City, whether it’s for a show, a ballgame or just to see some friends on the shores of beautiful Puget Sound. Most Alaskans have their favorite haunts — right down to where they stay and some fun restaurants.

As usual, though, things are changing.

The cost of flying from Anchorage remains low, and that’s good. For most of the summer, the fare was as low as $77 one-way. That’s going up to $98 each way, as long as you have two weeks to plan ahead.

Do you want to rent a car? It’s going to cost you, especially if you get it at the airport. For a two-day car rental (Aug. 23-25), I found a mid-size car at Alamo for $115. The rental itself is about $39 per day. The fees are an additional $18 per day. Do you want to park it overnight downtown? It may cost you about as much as the rental itself.

If I’m staying in downtown Seattle, I do my best to avoid a car altogether. Just take the “Link” light rail from the airport for $2.75 each way. But to find a hotel under $200 per night is quite a trick. It’s one reason I stayed with friends last weekend. Prices should soften up a bit in October or November.

So, if you’re driving into town to take in the sights, do it on a Sunday when the parking is free.

I drove in from the east side of Lake Washington. Be sure and take the Interstate 90 bridge, because the other bridge, State Route 520, now is a toll bridge. Mind you, there’s no toll booth. So you either have to buy a toll package when you rent your car or take another route.

Westlake Center is one of the popular downtown shopping malls between Nordstrom and Macy’s. It’s also the end of the line for the Monorail, which still runs from there over to Seattle Center at the base of the Space Needle. It’s a fun ride and it’s cheap: just $2.50.

They’ve been making some changes at the Space Needle and I wanted to see what the fuss was about. The walls at the observation deck are all glass now, I’ve seen some fun pictures. As I approached the ticket counter, I could see the line snaked around the Needle itself. It probably would have been a 50-minute wait. Plus, the cost to ride the elevator up to the top now is $35. If you’ve never been to the top before you should do it at least once.

If you’re up for a nice walk, just go straight down Broad Street — in front of the Space Needle — to Western Ave. It’s about six blocks downhill toward the water. There, you’ll find the Olympic Sculpture Park. Not only are there big sculptures and exhibits for free, but the setting affords a perfect view of Elliott Bay and the Olympic Mountains on the other side of Puget Sound. My favorite sculpture is one by Calder, called “Eagle.” If you walk in front of the sculpture, you can’t miss the Space Needle, which looms in the background.

The sculpture park is built over the railroad tracks that hug the waterfront. After crossing over, you can walk downhill to a small beach that’s part of the exhibit. The last time I was there I saw a seal hanging out on the rocks.

The sculpture park is part of the Seattle Art Museum. If you’re inspired by the giant exhibits and you’d like to see more, the museum is right downtown, across from the Pike Place Market. Look for the giant “Hammering Man” standing on the corner. Admission is $30.

Take a walk on the waterfront between the sculpture park and Pike Place Market. You can’t miss the giant Norwegian Cruise Line ships loading up passengers for week-long cruises. The cruise ship terminal is next to the Victoria Clipper terminal, where you can take a fast catamaran up to Victoria. Then you’ll find the Seattle Aquarium, which offers an up-close look at the marine environment of Puget Sound and the Pacific. There are jellyfish, birds, an octopus, otters, seals and a host of special exhibits. Tickets are $35.

Keep walking and look to the left. It’s a mess, but look closer and you’ll see that something is missing. That’s the Alaskan Way Viaduct, the elevated freeway that they’ve been tearing down for many months. It’s a great “urban removal” project by the city of Seattle.

You can’t miss the Seattle Great Wheel at Pier 57. This giant Ferris wheel is a great way to get a bird’s-eye view of the boat traffic and the skyline. Tickets are $15.

If you want to get out on the water, you can ride the Washington State Ferry across to Bremerton and back. Or go for a harbor cruise with Argosy Cruises, located next to the Great Wheel. The one-hour harbor cruise is $31.

Hungry? Walk up the Harbor Steps from the waterfront to the Pike Place Market. You’ll find plenty of snacks to grab and go. There also is a wide variety of incredible restaurants within walking distance. One of my favorites is Lola, located in the Hotel Andra, at 2000 Fourth Ave. It’s run by one of Seattle’s top chefs, Tom Douglas.

I sat at the bar on Sunday and had a delicious serving of eggs Benedict. The bartender recommended it because of the homemade biscuits. I also ordered a cup of coffee — which was very tasty.

Douglas and the staff at Lola take the guesswork out of tipping, though. In place of gratuities, there’s a 20% service charge added to every check. Additionally, the tax in Seattle is 11%. My bill for those two items was $31.

It’s not just at Lola, though. The restaurant at the Olive 8 hotel, Urbane, also tacks on 20% on every check.

So if you see a restaurant in downtown Seattle that looks inviting, pick up the menu beforehand. Read the fine print at the bottom to confirm their policy on tipping and service charges.

For more information on what’s going on in Seattle, check out visitseattle.org. The organization also has information desks in front of Pike Place Market and in the Washington State Convention Center.