Federal facial recognition is coming to Sea-Tac Airport; Delta Air Lines will be first to use it 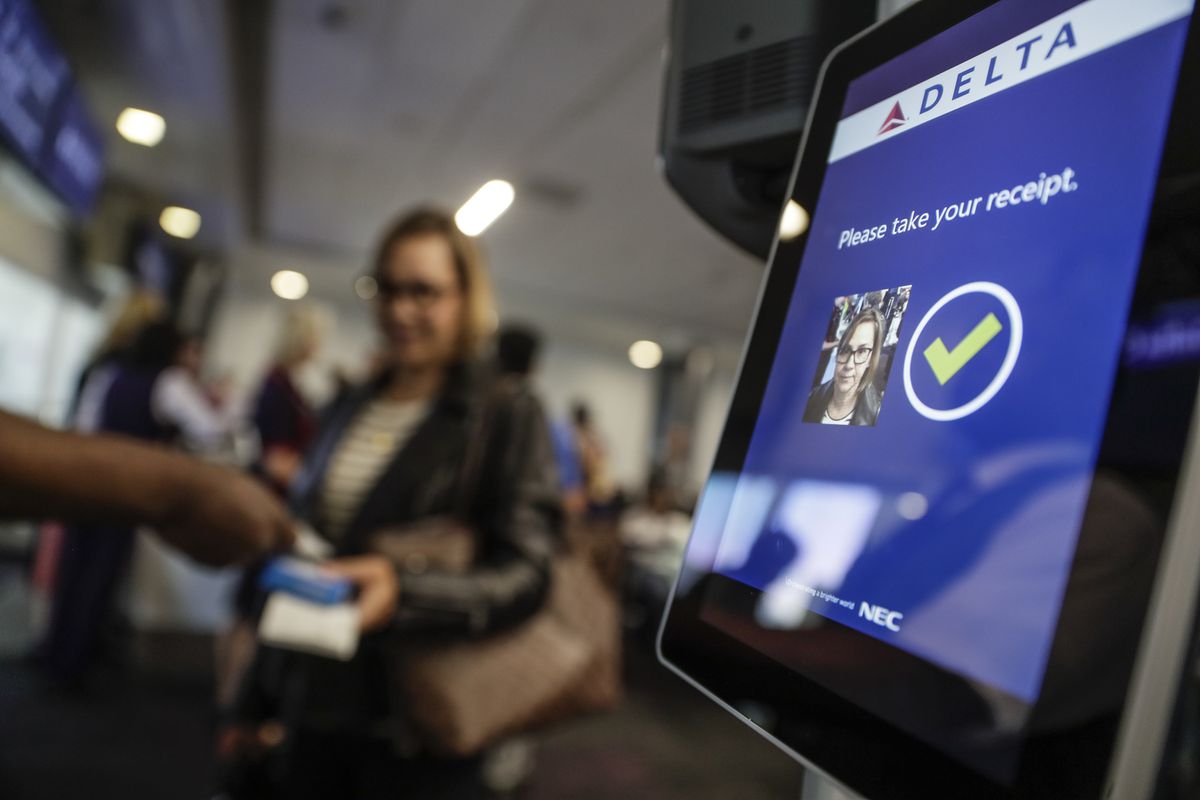 LOS ANGELES, CA, FRIDAY, SEPTEMBER 6, 2019 - Delta Air Lines begins to allow passengers to use facial recognition cameras to confirm their identity at an LAX boarding gate. Most passengers pause to have their picture taken before boarding on a flight to Paris, France. (Robert Gauthier/Los Angeles Times)

LOS ANGELES, CA, FRIDAY, SEPTEMBER 6, 2019 - Delta Air Lines begins to allow passengers to use facial recognition cameras to confirm their identity at an LAX boarding gate. Most passengers pause to have their picture taken before boarding on a flight to Paris, France. (Robert Gauthier/Los Angeles Times)

SEATTLE — Delta Air Lines, Sea-Tac’s second-largest carrier, is implementing facial recognition to use with international travelers at its gates by year-end.

Instead of fumbling for their passport and boarding pass to get on a plane, all that passengers will need to board a flight will be their face -- photographed by Delta and matched with a visa or passport photo on file with U.S. Customs and Border Protection (CBP).

Eventually, the service could expand to every point in the airport where international travelers would otherwise use a passport or boarding pass: check-in, bag check, security and boarding. The Transportation Security Administration (TSA) plans one day to expand the program to domestic travel, in part by using photographs and other biometric information captured when residents apply for some driver's licenses.

But before the first cameras are installed at gates, the publicly elected Port of Seattle Commission must decide: Will Sea-Tac embrace the effort to expand facial recognition at Sea-Tac, or resist the growth of the technology?

In mid-December, the five-member commission will vote on principles to guide the use of facial recognition at Sea-Tac, as well as similar biometric technologies throughout the Port of Seattle.

Commissioners say they want facial recognition to be voluntary, equitable and justified. Civil-liberties groups say that might not be possible.

What Delta has advertised as a convenience is part of a federal effort -- jump-started after 9/11, strengthened in the Obama years and expedited by the Trump administration -- to use biometrics like facial recognition to identify travelers, including American citizens, entering and exiting the U.S.

CBP has set an Oct. 1, 2021, deadline to use facial recognition to screen international passengers at the nation's top 20 airports -- including Sea-Tac.

[To board a plane without a ticket, just give up your face -- and your privacy]

It’s partnering with airlines like Delta to get that done. And it wants the Port of Seattle, which oversees Sea-Tac, to join the effort, along with 27 other airport administrators around the country.

For many Americans, facial recognition is a privilege they're willing to pay for, including to bypass airport security with a $179/year subscription to CLEAR.

Some Washington lawmakers, though, worry facial recognition is being introduced faster than regulations can keep up.

In the state Legislature, bills to regulate facial recognition died this spring because lawmakers couldn't agree on an approach to the technology.

In Congress, Rep. Pramila Jayapal, D-Seattle, has called the technology "invasive, unregulated and inaccurate," and pushed for limits on its use by the federal government.

At Sea-Tac, though, facial recognition is moving ahead at a steady clip.

"Why are we doing this?" That's what Port Commissioner Ryan Calkins asked at a September hearing on facial recognition.

"We've kind of skipped over to doing it," Calkins asked, "but what are the outcomes?"

It depends who you ask.

Delta, which has facial-recognition cameras in six airports, says its primary motivation is delivering better customer service by eliminating the need to juggle luggage, passports and boarding passes.

NEC, the company that built CBP's facial-recognition software, says the technology is faster than manual document checks. As passenger traffic at Sea-Tac continues to grow, shuffling travelers through lines more quickly may be a big sell.

But a recent Sea-Tac pilot project found that boarding with facial recognition alone was slower than when travelers scanned their faces and their boarding passes.

Two airlines suspended the pilot program, in part because they said facial recognition was slowing the boarding process, according to emails obtained through a public-disclosure request.

That's not to say boarding couldn't speed up going forward.

"If [facial recognition] is not faster and more efficient, there's no reason to do it," said Commission President Stephanie Bowman in an interview.

The federal government says facial recognition will help it more effectively enforce immigration law because the technology can determine the identity of passengers entering or leaving the country with uncanny accuracy.

With a 0.03% false positive rate, according to a 2018 audit, CBP's facial-recognition software is "significantly" better than humans at determining whether the person carrying a passport matches the passport photo.

And CBP can build biometric profiles that follow foreign travelers through their lives, because they're based on a more-or-less immutable characteristic: their faces.

Images of foreign nationals are kept in a law-enforcement database for up to 75 years. CBP says it deletes images of American citizens after 12 hours.

In the years after 9/11, the federal government said it would begin deploying biometrics at airports like Sea-Tac to better detect and interdict terrorists, but that effort languished until a 2016 spending bill funneled $1 billion to the program.

[How to avoid facial recognition at the airport]

President Donald Trump expedited the rollout of facial recognition in the executive order known as the “travel ban,” prohibiting citizens of six Muslim countries from entering the U.S.

Since 2018, biometrics like facial recognition have detected more than 200 people attempting to enter the country illegally, according to CBP. The agency says it's just as important to "close the loop" by photographing travelers when they leave, to ensure the person exiting the country is the same person who entered.

Linking identities to permanent biometric profiles will make it nearly impossible for people who entered the country illegally, or who overstayed their visa, to enter the U.S. again, according to CBP -- even if they try to use different documents.

Last year, the Port pledged not to use its own resources to "facilitate the enforcement of civil immigration law." That doesn't apply to facial-recognition cameras, Bowman said, because CBP already has flight manifests and passport or visa photos of travelers.

"It's essentially data they already have," Bowman said.

Civil libertarians say the Port should put the brakes on facial recognition.

"Like so many purported security programs based on technological razzle-dazzle, the purpose is never articulated," said Shankar Narayan, who tracks surveillance for the ACLU's Washington branch. "The program is just rolled out."

In June, 23 Democratic members of Congress -- including Rep. Adam Smith, who represents Sea-Tac's district -- asked the federal government to address "serious issues" with its rollout of facial recognition. It may be illegal, they wrote, for CBP to photograph American citizens.

The Congress members also warned the collected images may be misused if a contractor doesn't do enough to protect the data. That happened this summer, when a cyberattack on a CBP contractor snatched the images of nearly 100,000 people taken at border crossings.

Airlines aren't allowed to store images collected from travelers, but CBP hasn't audited airlines to see whether they're complying. NEC says none of its devices store images.

And computer programs are notoriously bad at identifying people of color, especially women, and people with beards or wearing hijabs. NEC declined to release data that would show how often its software misidentifies different ethnic groups.

"Face surveillance in particular supercharges the government's ability to track people and interfere with their civil liberties," he said, pointing to federal immigration agents' use last year of Washington's driver's license database to obtain photos of residents they suspected were living here illegally.

Facial recognition at airports is not a surveillance program, said CBP's Mike Hardin, the agency's point person for the program.

Lest anyone be unsure, on the bottom of one of his Port Commission meeting slides, in all-caps, was the sentence: "THIS IS NOT A SURVEILLANCE PROGRAM."

For now, all travelers can choose not to be screened by facial recognition, though eventually, foreign travelers won't have that option.

But at an October meeting, commissioners said not enough is being done to ensure travelers know they can opt out.

The facial-recognition advisory is convoluted and easy to ignore, Commissioner Fred Felleman said.

"We need to have a graphic artist or someone work on this," said Felleman, holding up a copy of CBP's text-heavy poster.

And if airline agents neglect to turn off the powerful cameras between customers, they capture images of everyone nearby, eliminating the ability to opt out, said Calkins, based on what he saw during a tour of facial recognition at Atlanta's airport.

People of color and Americans with limited English proficiency could feel even less comfortable asking not to be scanned, Narayan said.

"Even if done with good intentions, biometric selection is going to deepen the fear some communities feel," he said. "Technology never impacts communities equally."

"Are we required, in any form, to install those?" Gregoire asked. "Is there any condition of federal dollars on that commitment?"

Commissioners don't have the authority to restrict the federal government's rollout of facial-recognition cameras in the International Arrivals Facility or at TSA. Nor is the commission likely to block airlines' use of the technology.

But the Port could take steps in its mid-December meeting that may give it more oversight of facial recognition.

It might actually be easier to ensure that facial recognition doesn't infringe on passengers' privacy if the Port owns all the cameras in the departure terminal. And the Port could slow-walk the technology, in part to take advantage of lessons learned from other airports' mistakes.

Even if airports start out dubious about facial recognition, Hardin said, it's his experience they generally acquiesce to the technology in the end.