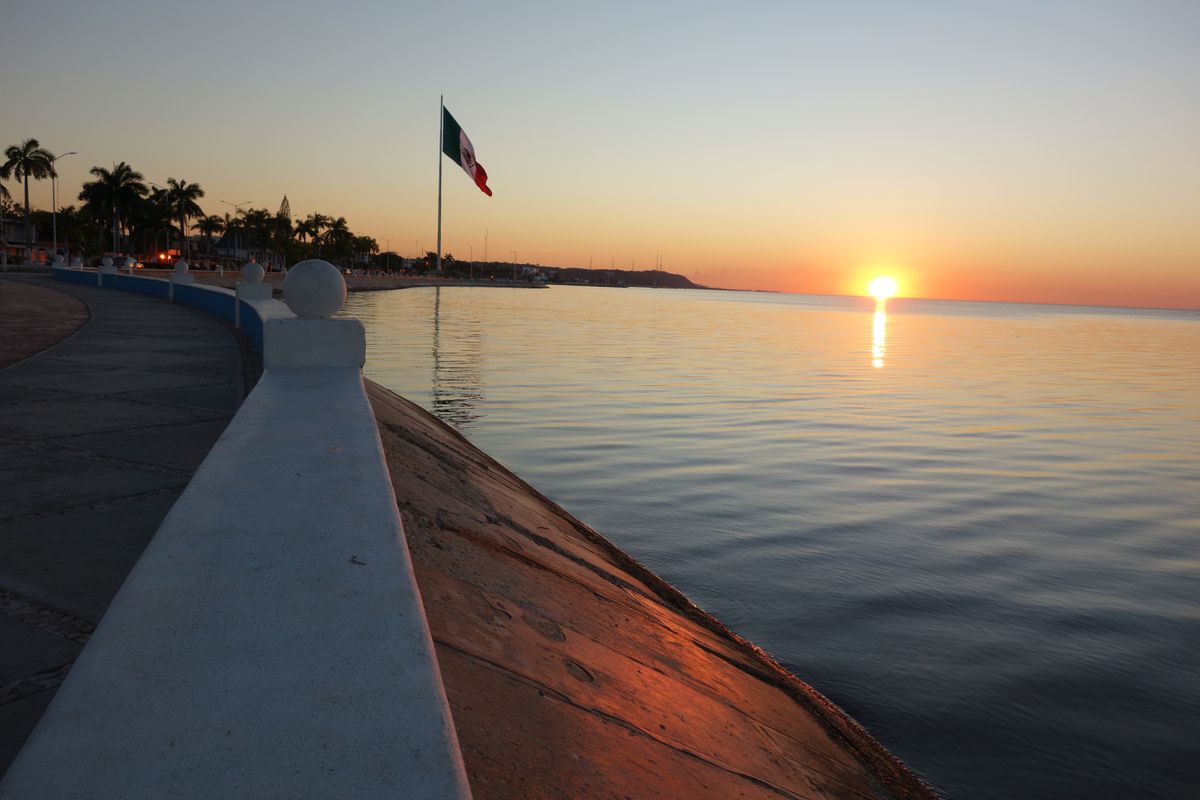 Sunset on the Gulf of Mexico, seen from the seawall in Campeche. (Scott McMurren)

Sunset on the Gulf of Mexico, seen from the seawall in Campeche. (Scott McMurren)

I’m getting ready to head over to Cancun International Airport for my flight home, but first wanted to write you a note to thank you for your gracious hospitality. You’re getting something of a bad rap north of the border. That’s not unusual, but it’s sad to see.

Over the past few years, we’ve visited some beautiful historic towns, enjoyed delicious meals and seen spectacular natural beauty. Thank you for publishing a comprehensive list of more than 100 Pueblos Magicos, or “magical towns,” each of which features a particular slice of your culture. I used the Google Translate tool to see the page in English.

Our trip over to Cancun this morning is on the ADO bus. Try as I might, I can’t see any of the info on their webpage in English. These buses are some of the roomiest and cleanest that I’ve ever seen. They’re much roomier than any first-class airplane seat. On the bus there are separate men’s and women’s restrooms. The terminals are clean, and the fares are cheap. Between Merida and Campeche, a 2.5-hour trip, the cost was about $11 one-way. We’ve enjoyed taking four- to eight-hour trips on ADO before. These folks do a great job.

We’ve made our own list of “magic” towns that captured our hearts.

1. Manzanillo. Our friends encouraged us to visit them there — what a trip. There are some nice condos set on a cliff overlooking the ocean. It’s called Vida del Mar, and we loved it. From Manzanillo, we headed up the coast to some beautiful beach communities like Barra de Navidad, which is set on a 5-mile stretch of beach. We always enjoy some delicious shrimp that’s pulled from the bay. Other friends from Anchorage keep heading up the coast to La Manzanilla, a sleepy village adjacent to a crocodile reserve. I’ve seen them, keeping a careful eye as we walk on the boardwalk next to the “no swimming” sign!

2. Oaxaca. We took the ADO bus from Mexico City. It took all day, but it was worth the trip. There are mountains all around, and on top of one of them is a large cluster of ancient pyramids at a site called Monte Alban. It’s well worth the bus trip (although some friends just walked up). There are several huge structures, but the one that was very interesting was the observatory. Since Monte Alban is 1,300 feet above the city, it affords beautiful stargazing opportunities.

The food is delicious, but I was impressed with the number of microbreweries available. I made a point to visit almost all of them. My favorite was La Santisima Flor de Lupulo. It’s so tiny it’s called a nanobrewery ... but they also serve delicious snacks. Don’t miss it.

3. Guanajuato. We landed in Guadalajara, then took a taxi over to the ADO terminal for the four-hour ride to Guanajuato. The town was built up to mine the silver in the hills. In fact, many of the old mining shafts now are underground roadways. The silver mines bankrolled the Spanish Empire for several hundred years. Guanajuato also has a special place in Mexican history: It was the site of one of the first battles in the war for independence from Spain in 1810.

We rented a home in the historic central district. The rooftop garden looked out over the valley, which featured lots of brightly colored homes tucked into the hill. Since there’s been no rewiring of the area for gas delivery, vendors come through the streets each morning, hauling propane tanks on their shoulder. “Gas … gas” is your cue to get up.

4. Patzcuaro. We rented a car in Manzanillo and drove over to Patzcuaro, near Morelia. This is where we witnessed the tradition of Las Posadas. Between Dec. 16 and 24, everyone sets lights out on the porch and has a warm beverage called ponche, or punch. This tradition is to commemorate the journey that Mary and Joseph made to Bethlehem. Everyone made us feel so welcome.

We stayed at Casa Werma in downtown Patzcuaro. It’s an easy walk to the historic center and the cathedral, where we went to celebrate Christmas Eve. This is a walled-in retreat complete with gardens, patios and plenty of fruit trees.

5. Merida. We just visited this city on the Yucatan Peninsula to get a better look at the Mayan ruins, the cenotes (blue holes) and other natural wonders. Staying in the historic center, you can choose from lots of Christmas-season celebrations. I particularly enjoyed listening to “Frosty the Snowman” in Spanish.

Our host, Alex Rudin, at Hotel Julamis surprised us each morning with a gourmet breakfast. Alex has more than 40 years’ experience in the kitchen, and he loves to put on a show. Each breakfast started with fresh orange juice, two delicious homemade croissants and a fruit cup. On the last morning he whipped up a cheese omelet with pork tenderloin. The morning before it was a roasted cauliflower omelet. It was delicious. Rooms range from $69-$99.

These are just a few of the wonderful experiences we’ve had in your country. It doesn’t touch on the kindness of your people, though. That’s a bonus, particularly since we essentially speak zero Spanish.

Thanks again for welcoming us on our latest visit. We look forward to coming back again soon.

P.S. I know you’ve got some tough crime and security problems. We didn’t see any on the Yucatan Peninsula in Merida or Campeche. But in Guanajuato there were 12 police officers killed last week. So I would think twice before going there until things settle down. My heart goes out to you.