Cheap fares in the U.S. and abroad: Consider this a nudge to book your next trip 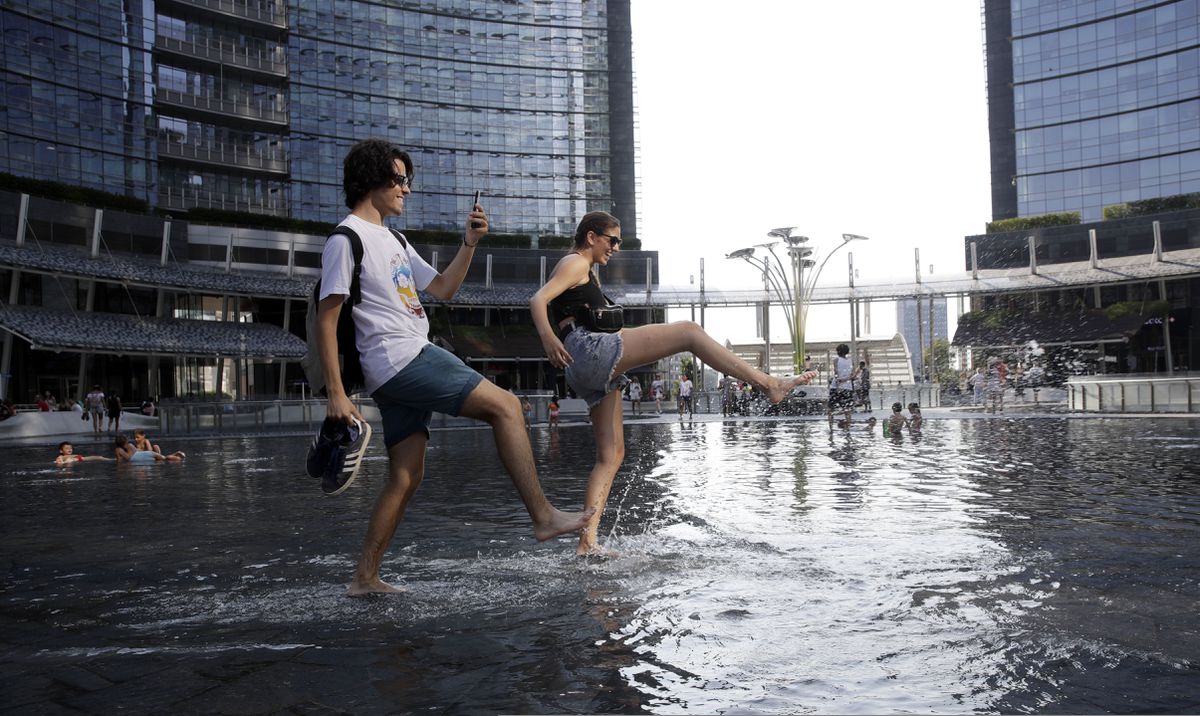 People cool off in a fountain in Milan, Italy, during a record-breaking heat wave on July 24, 2019. (AP Photo/Luca Bruno)

People cool off in a fountain in Milan, Italy, during a record-breaking heat wave on July 24, 2019. (AP Photo/Luca Bruno)

What does it take to get someone to go on a trip? For some of us, no encouragement is needed. We’re ready to go on another adventure at the drop of a hat. For others, it may take a gentle nudge, a suggestion, or a long series of days where the temperature is below zero. For some, the cold days are more than a nudge — more like a kick in the pants.

I’m always on the lookout for a good deal. There’s a formula in my head where my desire to visit a place goes up as the price goes down.

But one reader, James Mason, pointed out: “A flight isn’t a bargain if it goes someplace you don’t want to go.”

Indeed, travel planning has so many individual pieces to it that it’s easy to get lost in the weeds of the specifics. I believe that stops some people from taking the first step to travel someplace new. That’s where the gentle nudge comes in.

We were at a party last summer when a friend said she and her family were going to Israel. By the end of the afternoon, there were several other folks who committed to going at the same time. In fact, my wife and I wanted to go. It was the perfect nudge I needed to visit the Holy Land. And honestly, I had not even checked on the cost of the air tickets.

Later, we got a stronger nudge from the other side of the world. A former exchange student in Indonesia is getting married. Heck, they’re even making some clothes for us to wear to the ceremony.

If you’re an art lover or a museum nut, next month is Seattle Museum Month. If you stay at a participating downtown Seattle hotel, you can request a packet with passes for up to four adults. You’ll be able to get in for half-price between Feb. 1 and 29.

There are gobs of participating downtown hotels, including The Edgewater, the Hotel Five, all four of the Kimpton Hotels, the Mayflower Park Hotel, the Paramount and the Warwick.

More than 40 area museums are participating, including the Seattle Art Museum, the Seattle Aquarium, Chihuly Garden and Glass exhibit next to the Space Needle, the Museum of Flight, the Woodland Park Zoo and the Museum of History and Industry (MOHAI).

The final nudge for Seattle Museum Month should be the airfare: from $88 one-way on Alaska Airlines or Delta.

If you love to eat, here’s a nudge to visit Portland, Oregon. During March, a bunch of the city’s best restaurants offer special three-course meals for $33. Things have changed since I lived in the Rose City, and I don’t recognize a single restaurant on the list. But they’re getting rave reviews — places like St. Jack, Departure, Paley’s Place and Renata. I got these names off the 2019 list, so things may change for the March 2020 lineup.

One of the extra bonuses for Portland is the city’s public transit infrastructure. It’s simple to take the train downtown, then use it to get around town. As far as getting there, Alaska Airlines offers nonstop flights from Anchorage for $128 one-way.

Sometimes price itself is enough for me to look closely at a new destination. That’s the case with Fiji right now. One of my Facebook followers sent me a note about Alaska Air and Fiji Air offering coach tickets for 40,000 miles round-trip, starting Feb. 16. These award tickets are available through July 4 when you book on Alaska Air’s website.

In addition to the miles, there’s a $131 fee for the Anchorage-Fiji ticket.

By comparison, if you were going to buy the ticket to Fiji on Alaska Air and Fiji Air, it would cost you about $1,150.

While we’re on the subject of pristine, exotic, tropical beaches, Air New Zealand is having a sale on its weekly nonstop flight between Los Angeles/LAX and Rarotonga, in the Cook Islands. There’s just one flight per week, and it costs $545 round-trip between May 9 and Nov. 21. The outbound flight leaves each Saturday night at 11:30 p.m. The return flight from Rarotonga at 11:59 p.m. each Friday night. The L.A.-Rarotonga is nudge-worthy, but the Anchorage-L.A. flights are really cheap — between $300 and $400 round-trip.

The “cheap ticket to paradise” nudge probably is the least compelling, although it works well when it’s 10 degrees below zero outside. The call from a friend or loved one carries more weight, I believe.

If a friend wants you to go to Italy, you should do it. Tell them about the round-trip fare from New York’s JFK airport to Milan for as little as $409 on Emirates. You’ll get Alaska Airlines miles on your flight (probably 50% of the miles flown). It’s a nonstop flight on an Airbus 380. The rate is good through May 7 and it matches up well with Alaska Air’s fare from Anchorage to New York for as little as $379 round-trip.

Do your kids want you to hike the Camino de Santiago in Spain? Take advantage of good fares from San Francisco to Barcelona on TAP Air Portugal, from $295 round-trip, through March 18. Get Camino Ways to help you with a self-guided hike along the pilgrimage route. All of the many routes of the pilgrimage lead to Santiago de Compostela, so you can start in Lisbon, Porto, Madrid or one of several other cities. I’m just partial to Barcelona. I got a nudge to go there a few years ago and we ended up meeting some great folks who run tours in Barcelona and Madrid. One of the owners of Spanish Trails, Tracy Harris-Inman, is from Anchorage.

My New Year’s wish for you is that you’ll be open to the gentle nudge of a new adventure. Maybe it’s a classmate or a loved one who makes the suggestion. Maybe it’s a movie or a song. But the payoff could be wonderful: new friends or new adventures with old friends — and new stamps in your passport.