An evolving situation for travelers upends lives of Alaskan volunteers abroad, along with many others 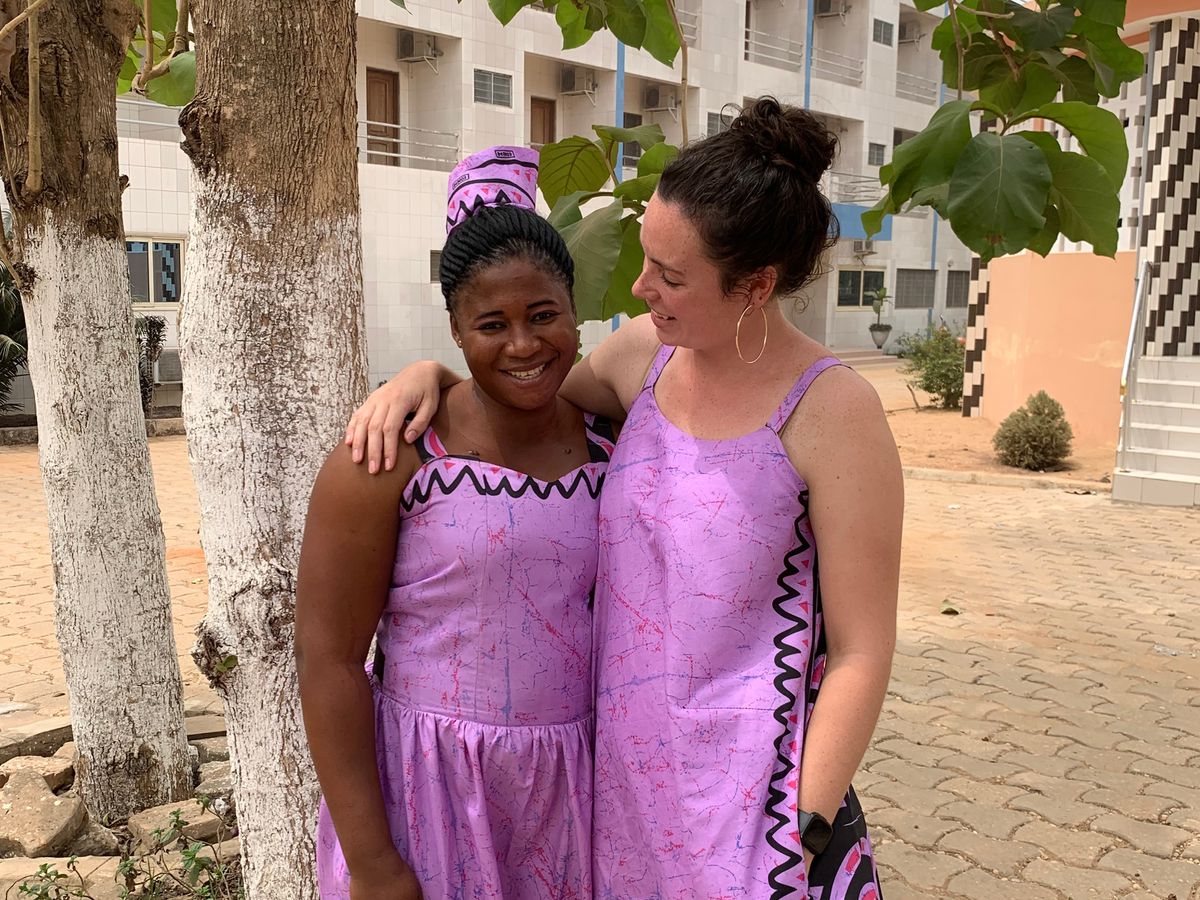 Rita Dexter, a Peace Corps volunteer at right, stands with her counterpart and best friend, Djamila in Benin. They attended an in-service training in February on malaria and nutrition. (Photo courtesy Rita Dexter)

Rita Dexter, a Peace Corps volunteer at right, stands with her counterpart and best friend, Djamila in Benin. They attended an in-service training in February on malaria and nutrition. (Photo courtesy Rita Dexter)

Have you ever felt like a refugee in your own country? Uprooted at the last minute in an evacuation?

Earlier this month, Rita Dexter was told she had four hours to pack her things and leave her post in Onklou, Benin.

Every day, more travel options are closing down as a result of the COVID-19 pandemic. At the same time, there’s a race to repatriate Americans who are serving around the world.

Two weeks ago, Rita was serving as a Peace Corps volunteer in rural Benin. Benin is in West Africa, sandwiched between Nigeria and Togo. She and her team were giving health talks in the outlying villages of northern Benin on nutrition, neonatal health, sanitation and hygiene. She recently had started an all-girl soccer team at a school without a PE teacher, and kept a blog of her experiences.

On March 16, she received the evacuation notice. “My first reaction was to cry,” she said. “My hosts didn’t understand why we were going home to the U.S., where the virus was more widespread,” she said.

Rita graduated from West Anchorage High School. But since her freshman year in college at the University of Puget Sound, she’s wanted to volunteer with the Peace Corps. She speaks French and wanted a health-related assignment, since she’s set her sights on medical school.

“I left most of my belongings there,” she said.

On Tuesday, March 17, Rita and her fellow volunteers traveled by “bush taxi” to the town of Djougou to a consolidation point. They checked in to a hotel and spent the night. The following day, it was an eight-hour drive to Cotonou International Airport. Some volunteers left the following day, but Rita’s group left that Friday night. First, it was a flight to Istanbul, transferring to another Turkish Airways flight to Los Angeles. From LAX, she flew nonstop on Alaska Airlines back to Anchorage.

Now, quarantined in Anchorage, she talks to her new friends in Africa every day. “I have many close friends there and I wasn’t able to say goodbye,” she said.

Sarah Johnson caught the travel bug from her parents. “We would often vacation in a rural community in Costa Rica,” she wrote, “and I’d traveled around Central America. I always wanted to be able to ‘give back’ and help those rural communities.”

Before volunteering with the Peace Corps, Sarah worked as a registered nurse in the critical care unit at Juneau’s Bartlett Hospital. “I saw the Peace Corps had a position open in the health sector in Ecuador. Unfortunately in the Peace Corps I am not allowed to work as a licensed nurse treating patients. My duties were in public health education,” she wrote. Sarah also kept a blog of her Peace Corps experience, although she’s careful to add this disclaimer: “The views expressed are mine only and do not necessarily reflect the views of the U.S. Government, the Peace Corps, or the Ecuadorian Government."

In her blog, Sarah offers a comprehensive view of her time in the province of Napo, in the Amazon jungle. It was hard for her to leave earlier this month on a moment’s notice. “On Sunday, Mar. 15 at 9:39pm, I received a text message saying the Peace Corps was suspending all operations and evacuating all volunteers,” she wrote.

“We had to pack our bags and plan on leaving the next morning. I was in shock, denial and disbelief,” she wrote. “We couldn't even prepare for this goodbye, it just came out of nowhere.”

Sarah went to Quito, Ecuador, on March 16. At the hotel, their wake-up call was 2:30 a.m. for the flight to coastal city of Guayaquil, since Quito was going on lockdown at 5 a.m. After an all-day wait in Guayaquil, the evacuated volunteers boarded a chartered aircraft to Miami. After spending the night in Miami, Sarah flew to Anchorage to begin her 14-day quarantine.

“It all felt like a nightmare — and I was hoping to wake up. It’s one thing to complete your two years of service or know that you are leaving your host family on a certain date. But to have to move your life and say goodbye to your friends and family overnight — that’s another situation,” she wrote.

Both Rita and Sarah are philosophical about the Peace Corps’ decision to evacuate the volunteers and are anxious to return to their posts, if possible. The situation is evolving daily abroad — and here in Alaska, too.

An increasing number of villages around the state are prohibiting travelers from entering their communities. From Metlakatla near Ketchikan to villages in northern Alaska, restrictions now are in place. These new rules are to keep the COVID-19 virus out of these tight-knit communities. Previous pandemics, such as the Spanish Flu in 1918, took a devastating toll on some villages.

“The trajectory we’re seeing is for travel to be restricted in all the villages,” said Matt Atkinson of Warbelow’s Air Ventures in Fairbanks. Warbelow’s and its sister airline, Wright Air Service, fly Cessna 208s and Piper Navajo planes to many villages from Fairbanks, including Anaktuvuk Pass, Bettles, Beaver, Fort Yukon and Minto.

In fact, Alaska now has banned all non-essential in-state travel.

Alaska Gov. Mike Dunleavy has also mandated that travelers from outside Alaska self-isolate for 14 days. Also, Hawaii’s governor has instituted a strict 14-day quarantine period for all travelers arriving in the islands. This is no vacation.

Alaska Airlines has announced a 70% reduction of its schedule, although detailed city-by-city reductions have not been released. Air Canada has canceled its twice-daily summer-only nonstop flights between Anchorage and Vancouver.

Eurowings, the low-cost subsidiary of Lufthansa, canceled its planned Anchorage-Frankfurt flights, which were to begin on June 1. Condor Airlines, which recently was purchased by LOT Polish Airlines, also flies Anchorage-Frankfurt starting in May. But one official confessed, “We’re still waiting for the final 2020 summer schedule. It’s not yet decided.”

United is having trouble maintaining its limited schedule of one flight per day to Denver. Last week, the carrier canceled the flight on Tuesday, Wednesday and Thursday. The flight on Friday night, scheduled to depart at 11:40 p.m., showed a 10:50 delay.

Whether you’re overseas, here in Anchorage or somewhere in between, this virus has a habit of dishing up some unsettling travel surprises.