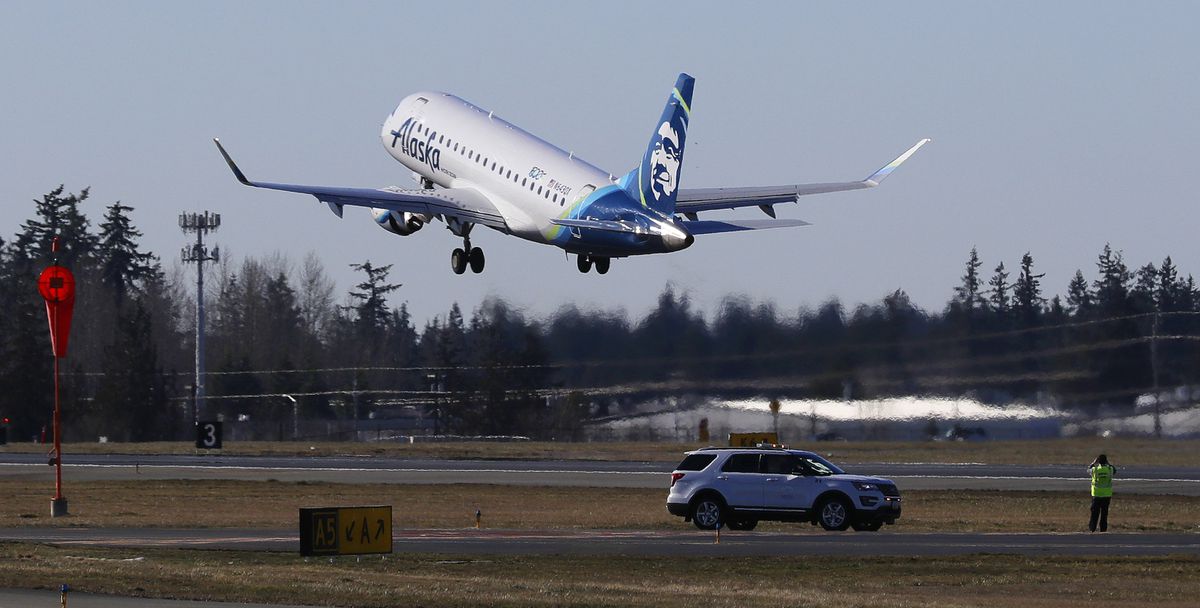 What does it take to start new jet service between Anchorage and two or three Alaska cities?

Well, quite a lot, it seems. Aside from the plane, the crew and the financial ability to operate in an uncertain travel environment, there still are lots of safety and regulatory barriers.

Last week, I heard there was a sleek new jet on the apron out by the Alaska Airlines hangar. It’s one of the 62 Embraer E-175 jets in the Horizon Air fleet. I tried to get up close for an up-close look, but Joe Sprague, Horizon’s president, said the crew was too busy working to pose for pictures.

These regional jets are not scheduled to start flying passengers until Oct. 18. But the planning for Horizon’s new service started back in April, when RavnAir stopped flying to more than 100 destinations around the state.

Two destinations, King Salmon and Dillingham, are served each summer by Alaska Air’s 737s. Both cities are home to Bristol Bay’s huge fishing industry — and thousands of workers come north to process the salmon.

To better serve the communities, Alaska Air started up about a month early this spring with the 737s. The airline also committed to serving the two cities year-round. But the 737 was too big of a plane for the market, with more than 120 seats.

So Alaska turned to Horizon Air, its wholly owned subsidiary, to develop a plan using the smaller 76-seat regional jet to serve the markets during the slower winter season.

“The Horizon team has a full project plan and project manager for the new service,” said Sprague. “There are some FAA approvals that are necessary. But there also are safety assessments, ground support and lots of other elements.”

In fact, the E-175 was in Anchorage doing navigational testing for the airports between King Salmon, Dillingham, Fairbanks and Seattle (including Sitka, Juneau and Ketchikan).

The E-175′s navigation system, called RNP (or required navigation performance), is identical to the 737s and was developed by Alaska Air in the early 1990s. “RNP technology provides computer-plotted landing paths with pinpoint accuracy by using a combination of onboard navigation technology and the Global Positioning System satellite network. It allows aircraft to fly safer, more reliable landings, and reduces reliance on ground-based navigation aids,” according to Alaska Airlines.

Back in 2014, Horizon Air started flying its twin-turboprop Q400 planes from Anchorage to Fairbanks and Kodiak. That lasted for a couple of years before the smaller planes (also 76 seats) were phased out in favor of the 737s.

This time, things are a little different. Before, there was a crew base established for the planes in Alaska. “It’s tough to operate a small satellite base for an aircraft. The E-175 easily has the range for Anchorage-Seattle flights,” said Sprague. “So maintenance support will be in Seattle.”

Horizon’s E-175s will make their way up from Seattle to fly the Alaska routes. So Horizon’s pilots had to fine-tune the RNP approaches at airports all the way up and down the coast, in case they needed to land for a medical emergency or a mechanical issue.

Two E-175s will be assigned to the Alaska routes. Those include Seattle-Anchorage, Anchorage-King Salmon-Dillingham-Anchorage (the loop) and Anchorage-Fairbanks. Of the two crews assigned to fly the planes, one crew and one plane will overnight in Anchorage, while one plane/crew will fly home to the base in Seattle.

Travelers to Bristol Bay will notice an important difference with the E-175s. There are no middle seats. The first four rows of first class seats are in a 1 x 2 configuration. All the rest of the rows are 2 x 2. If you’re flying to Fairbanks, there still will be a couple of 737s on the route, but the E-175 will provide the necessary “commuter” frequency between Alaska’s two largest cities.

Alaska Air is not the first airline to fly the E-175 in the state. Delta is flying them between now and Aug. 30 from both Sitka and Ketchikan to Seattle. And for a couple of years during the winter, Delta flew its Fairbanks-Seattle flight with the E-175. This winter, Delta will operate a 737 on the route.

King Salmon and Dillingham were not the only cities to receive supplemental service in the wake of Ravn Alaska’s shutdown. In May, Alaska Air started flying from Anchorage to Cold Bay. The carrier initiated an en route stop from Anchorage to Adak to accommodate travelers to/from Dutch Harbor, which is 150 miles away.

Nobody regards the two-flight itinerary via Cold Bay as a perfect solution for Dutch Harbor travelers. But it’s not at all certain when nonstop commercial service between Anchorage and Dutch Harbor will resume. Right now, it’s a stopgap solution for travelers who cannot afford to charter a plane to fly from Anchorage.

Horizon’s Sprague, who also served for more than 18 years at Alaska Airlines, noted these changes in Southwest Alaska represented the airline’s commitment to the state. “We’ve made that commitment since 1932,” he said.

Alaska and Horizon can trace their heritage back to 1932. That’s when Linious “Mac” McGee started McGee Airways with a single three-seat Stinson aircraft. McGee’s first route was between Anchorage and Bristol Bay.