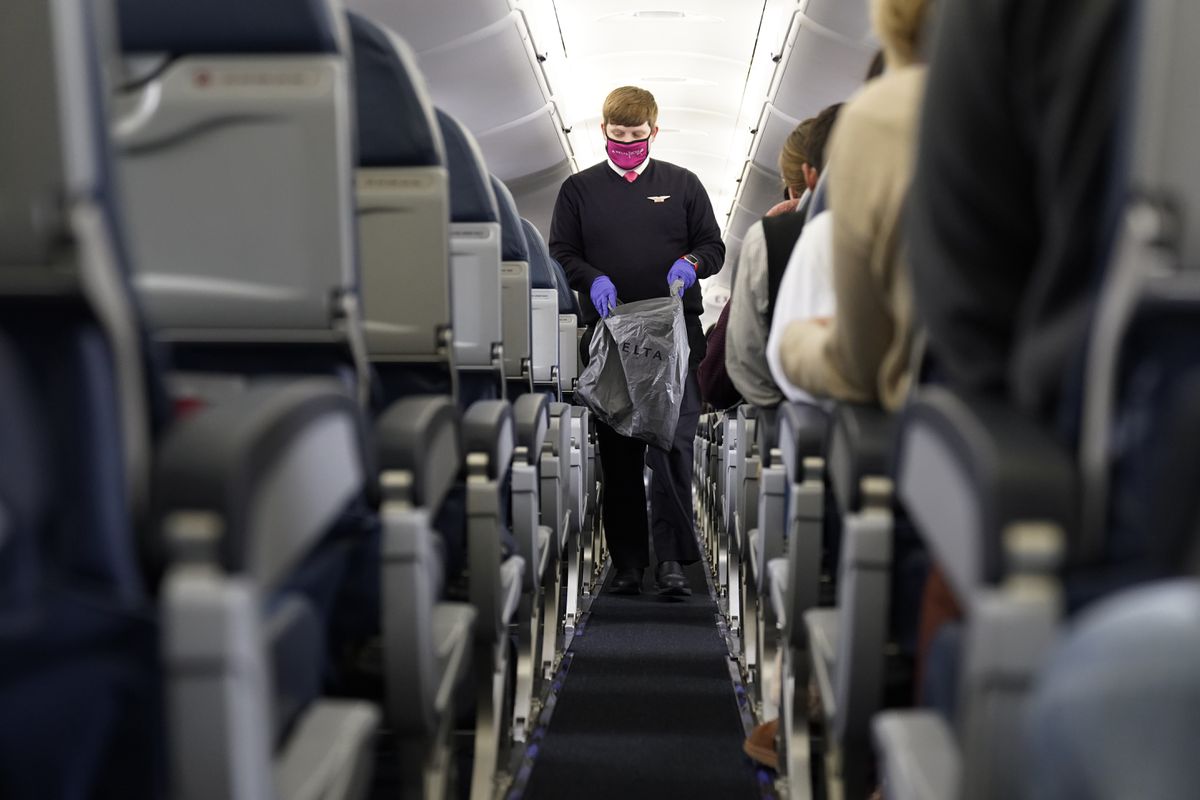 A Delta flight attendant works with a protective mask and gloves during a flight to Philadelphia, Nov. 30, 2020. (AP Photo/Paul Sancya)

A Delta flight attendant works with a protective mask and gloves during a flight to Philadelphia, Nov. 30, 2020. (AP Photo/Paul Sancya)

The surge in coronavirus cases across the United States has millions of Americans questioning whether they should travel home for the holidays. Nonetheless, flight attendants are gearing up for another busy period of hectic airports, packed planes and holiday traffic.

It has been an incredibly challenging year for those in the profession. Throughout the pandemic, tens of thousands of flight attendants were furloughed as the airline industry faced some of its worst job losses in history. Those lucky enough to keep their jobs are adjusting to elements of the new normal, such as policing passengers for coronavirus policies and wearing personal protective equipment.

We asked four flight attendants to share their advice from the front lines of pandemic travel to help those planning on flying this holiday season.

“Don’t let your guard down, take the precautions.”

After volunteering to take about seven months off during the pandemic, Jalisa Robinson, who is based in Fort Lauderdale, Fla., is back to flying for Southwest. While she has noticed that travel is picking up again, Robinson is not anxious about flying.

“I haven’t had really too many worries because I feel it’s just a part of life,” she says.

Passengers following coronavirus precautions give Robinson confidence in flying. When she boards a plane, she wipes down common surfaces and makes sure she is washing her hands constantly. Her advice to travelers is to do the same.

“Don’t let your guard down, take the precautions,” she says.

However, there may be such thing as too many precautions. Robinson says travelers should avoid going to extremes with their PPE choices, as some can do more harm than good onboard, particularly in the case of emergency. Avoid wearing bulky gear like a hazmat suit that can be difficult to see out of and limit movement.

“Protect yourself, I’m all for that. But make it comfortable and feasible in case something else happens that you need to move quickly,” Robinson says.

“Be nice, because a lot of us are wishing that we could be home.”

Danario Green was optimistic about returning to work as a JetBlue flight attendant after taking a five-month voluntary leave earlier in the pandemic. His first few flights came with some jitters, but now Green has eased back into the routine and feels comforted by the precautions JetBlue is taking to keep staff and travelers socially distanced, and by how frequently plane air is filtered.

“I totally get that the mask is uncomfortable ... but unfortunately, if you’re going to take a plane you have to wear your mask,” says Green, who lives in Flint, Mich.

Beyond mask requirements and other recommend hygiene, Green says be empathetic to flight crew.

“During the holidays, flight attendants aren’t able to be with their family, we’re making sure that you guys get to your destination and back to your families,” Green says. “Come on and be caring, be nice, because a lot of us are wishing that we could be home.”

“Don’t travel sick ... that, of course, is going to scare everyone else.”

For Maggie Ruetz, a Dallas-based flight attendant for Mesa Airlines, working during the pandemic can feel like babysitting. While most passengers comply with new mask protocols, there are plenty who test the rule, particularly on flights departing from destinations with fewer mask regulations.

“They see me and then they start pretending to sip their drink or eat nuts really slowly,” Ruetz says. “They kind of find a loophole to get out of it.”

Loophole seekers aside, Ruetz is happy to be back flying. She had only been a flight attendant for five months when the pandemic began, and she knew her junior status at the airline put her at risk for being furloughed. Her job was spared; however, Ruetz still took unpaid leave out of concern for her mother’s compromised immune system.

Her advice to holiday travelers is to keep others’ health in mind when making the decision to fly.

“If you are going to travel, don’t travel sick,” she says. “I’ve seen people come on [sick] and it’s probably not coronavirus, but they’re sneezing and coughing and that, of course, is going to scare everyone else.”

“Be earlier than you normally would.”

The days of empty airports may be over. Atlanta-based flight attendant Brianna Burnett, who has been flying with Delta for almost five years, warns travelers not to cut airport arrival close this holiday season.

“Give yourselves ample time to get to the airport due to everything being so different now,” she says. “Travel is picking up absolutely everywhere. Atlanta is a madhouse, so be earlier than you normally would.”

Pre-pandemic, Burnett would recommend travelers arrive two hours before a flight. Now she is suggesting three or even four hours, particularly as winter travel may also come with weather complications.

Burnett has not felt unsafe working during the pandemic. “With the measures that my company has taken to make us feel safe as a crew, I don’t have any worries,” she says, adding that Delta has provided flight attendants PPE and testing before every flight.

Burnett says she is constantly having to remind passengers to wear face coverings, and the message is not always well received.

“It saddens me to see that some people don’t behave the same and are mean or nasty to the crew members when we’re just trying to protect ourselves and everybody else,” she says. “We have family members, too, that we want to go home to and not have to bring [coronavirus] back with us.”