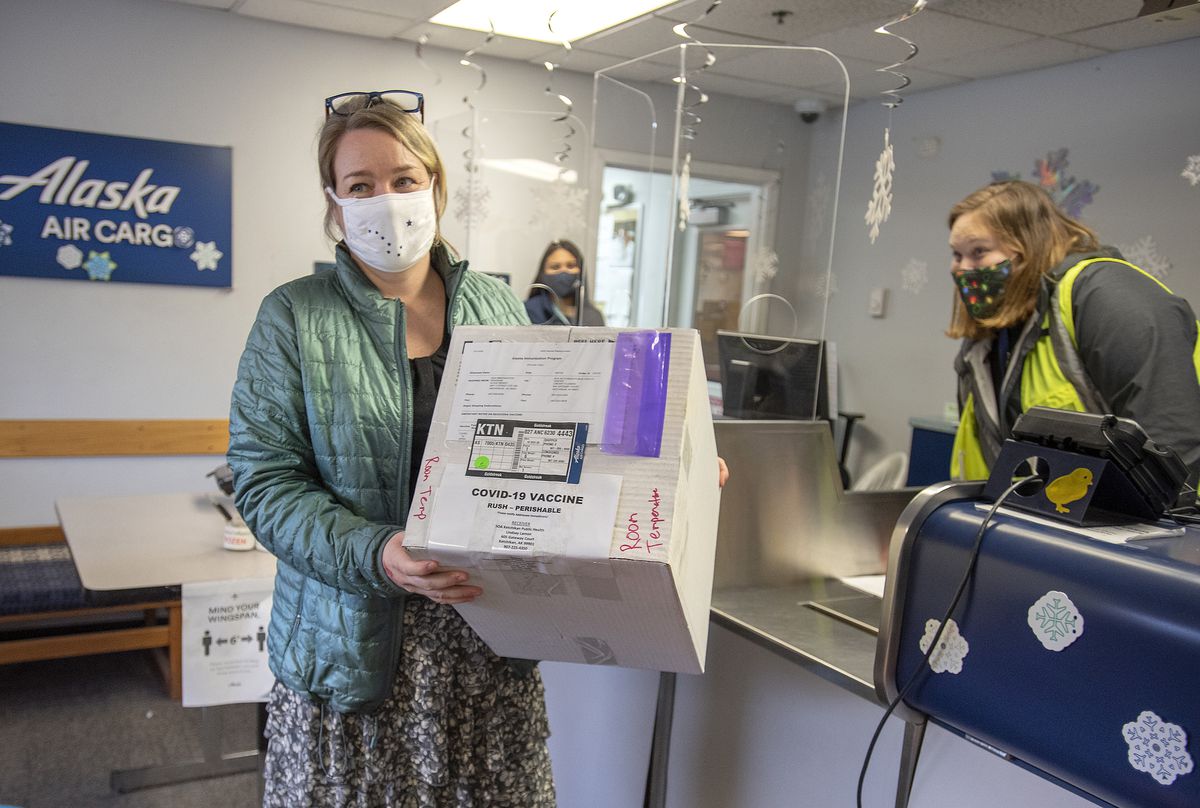 Despite repeated pleas from the federal Centers for Disease Control and Prevention to forgo holiday travel because of the pandemic, more than 1,000,000 travelers were cleared by TSA on multiple days last week.

Those numbers are still low by 2019 standards — about 60% less than last Christmas. Still, more travelers are on the go than at any time since the pandemic began. The state of Alaska’s public health officials advise that holiday travel (especially family gatherings outside your household “bubble”) can increase your risk of contracting and/or spreading COVID-19. Still, for many Alaskans, travel is essential for going to work, to school or to the doctor.

In fact, there’s something of a travel boom going on right now across Alaska. Because in unusual times like these, if you can’t go to the doctor, then the doctor has to come to you.

The rush started on Dec. 13, when UPS Airlines delivered the first batch of COVID-19 vaccine to Anchorage.

Matthew Bobo is the manager of the Alaska Immunization Program. “For more than 20 years, the state of Alaska has developed the infrastructure to ship vaccinations, including flu,” he said.

The Alaska Immunization Program is responsible for getting the vaccine to tribal health organizations around the state, including the SouthEast Alaska Regional Health Consortium in Sitka, the Yukon-Kuskokwim Health Corp. in Bethel and the Arctic Slope Native Association in Utqiagvik, among others.

It is up to the regional health corporations to deliver the limited amount of the vaccine to the highest-priority recipients. Initially, that includes frontline medical personnel and elders.

“We get the vaccine as far as the tribal hub,” said Alicia Wieber, the vaccine manager for the Alaska Immunization Program. “Then they are responsible for repackaging the vaccine for the smaller communities.”

And that’s the travel rush that’s going on around Alaska right now, on top of all the holiday packages and mail that’s already in the system.

Bethel is a regional hub for more than 50 smaller communities, which are connected by commuter air carriers.

Lee Ryan is the third-generation leader of his family’s airline, Ryan Air. Although the carrier flies a couple of scheduled passenger routes, including Anchorage-Unalakleet, most of its flights are freight or charter.

“We turned a Cessna 208 into an office for a doctor and a nurse for YKHC,” Ryan said. Last week, Ryan’s flying clinic did a loop out of Bethel to Newtok, then to Nightmute, to Toksook Bay, to Mekoryuk on Nunivak Island and back to Bethel.

“We were supposed to fly to Chefornak but the runway lights weren’t working,” Ryan said. “So we just came back to Bethel.”

[As COVID-19 vaccines are distributed in Alaska, the state’s top doctor reflects on ‘a big changing point’ in pandemic]

Alaska Airlines is flying vaccine to most of its in-state destinations, spokesman Tim Thompson said. That includes Utqiagvik, Kotzebue, Nome, Bethel, Kodiak, Juneau, Sitka and Ketchikan. “At this time, it’s safe to say we’ve transported thousands of doses,” he said.

Up on the North Slope, Alaska Airlines delivered the vaccine to the Arctic Slope Native Association in Utqiagvik, which manages Samuel Simmonds Memorial Hospital.

Although Utqiagvik is the largest community on the North Slope, there were several villages that needed vaccine, including Wainwright, Point Hope, Point Lay and Atqasuk. Rather than chartering with a local air carrier, Arctic Slope Native Association worked with the North Slope Borough’s Search and Rescue Department.

Carl Ramseth is the general manager for Alaska Seaplanes in Juneau. Usually, December is busy delivering lots of freight and mail to places like Hoonah, Kake, Angoon and Sitka. This year, the vaccine takes precedent over some other shipments.

“Our first mission was when we received a vaccine shipment from Alaska Airlines in Sitka,” Ramseth said. “We used our PC-12 to fly the vaccine to Klawock with two doctors and two nurses. They were there for a couple of hours and then flew back.”

Alaska Seaplanes has a Cessna 206 on floats stationed in Sitka. “We flew with a vaccine shipment to Angoon. Then we were scheduled to fly on to Hoonah, but bad weather kept us from getting there,” he said.

Alaska Seaplanes was supposed to fly on Dec. 18 to Haines and Skagway with vaccine from Juneau. “But because of bad weather, SEARHC hired Allen Marine to take the vaccine and the crew by boat,” Ramseth said.

The rough seas were one consideration. But the public health professionals taking the vaccine had to put on some more layers for the journey. “There’s no heat on those boats,” he said.

“It’s nice to be able to play a part in getting the vaccine where it needs to be,” Ramseth said.

Fen Kineen is the chief pilot for Bering Air in Nome. “I got vaccinated,” Kinneen said. “All of our pilots are eligible to be vaccinated.” Kinneen said Bering Air is flying health providers from Norton Sound Health Corp. around the region with the initial batch of vaccine. Bering Air flies from Nome and Kotzebue to surrounding villages including Gambell and Savoonga on St. Lawrence Island.

Matt Atkinson with Warbelow’s Air Ventures in Fairbanks works with the Tanana Chiefs Conference to distribute vaccine. “We flew downriver from Fairbanks, stopping in Galena, Ruby, Huslia, Hughes and Kaltag,” he said.

Alaskans’ travel patterns are different this year. Even though we want to travel, many of us are standing by while essential personnel and vaccines are distributed. Because the sooner people are vaccinated, the sooner more people will be ready and willing to travel.