As vaccine rollout offers hope for a return to normal, bargain airfares beckon to willing travelers 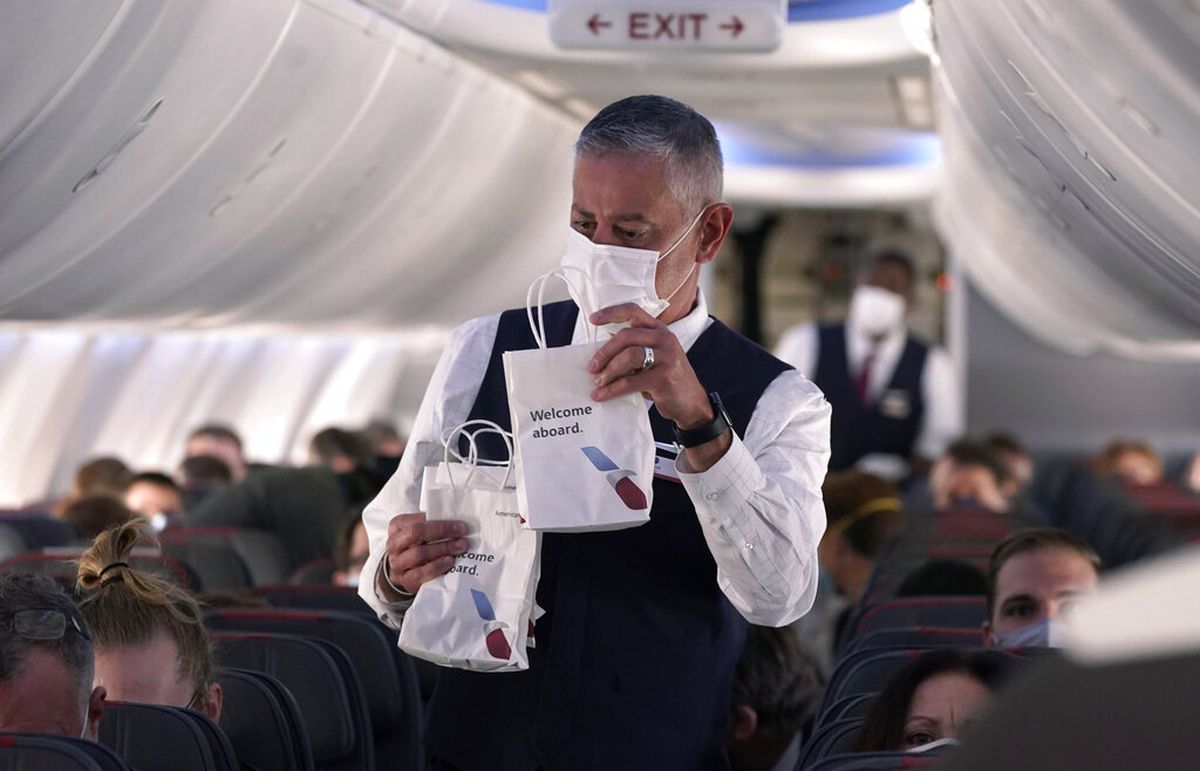 An American Airlines flight attendant hands out snack bags aboard a Boeing 737 Max jet before taking off from Dallas Fort Worth airport in Grapevine, Texas, Wednesday, Dec. 2, 2020. (AP Photo/LM Otero)

An American Airlines flight attendant hands out snack bags aboard a Boeing 737 Max jet before taking off from Dallas Fort Worth airport in Grapevine, Texas, Wednesday, Dec. 2, 2020. (AP Photo/LM Otero)

In a normal year, talking about travel is fun. Many people have a list of places they’d like to visit while others are saving up for a special trip. It’s interesting to check out the best deals on airfares or frequent flyer specials, perhaps to explore someplace new.

But last year was anything but normal … and 2021 is starting off with a big fat bang as if to say, “Second verse, same as the first.” For travelers, the COVID-19 pandemic crowds out many other considerations. Then there are the Centers for Disease Control and Prevention guidelines, which essentially proclaim: “DON’T TRAVEL.”

It seems like the ones who are traveling the most right now are the health care teams, taking the vaccine out to towns and villages.

The quicker people get vaccinated, of course, the quicker more of us can make plans to go see friends or visit another country.

In the meantime, people still need to travel for work, to see a doctor or for any number of reasons. The virus has put a huge damper on demand, though. Then there’s still the patchwork of travel bans, lockdowns and the quest for the empty middle seat.

Since demand is down, prices are down.

Within Alaska, the reincarnated Ravn Alaska is flying its fleet of Dash-8s turboprops from Fairbanks to Dutch Harbor. Not many people are traveling, but January isn’t exactly high season.

While the new Ravn still has the same old planes, there’s a new management group and a new website for booking. For travel between now and March 13, the carrier has some pretty low prices.

Ravn’s fares from Anchorage to Dutch Harbor, St. Paul Island, Cold Bay and Sand Point are very expensive, between $549 and $599 one-way. But for the sale, Ravn has dropped the price on all of these high-priced routes to $299 one-way.

All discount tickets for Ravn’s flights must be purchased by Jan. 15.

If you prefer to go by sea, cruise lines still are working to develop a plan to satisfy the CDC. Last month, both Princess and Holland America Line canceled cruises longer than seven or eight days. Last week, both companies, which are subsidiaries of cruise giant Carnival, canceled many cruises in April, May and June.

For Princess in Alaska, three ships were affected for sailing dates through May 15. For Holland America, the cancellations extend in to early June. Sailings on six ships were canceled.

Do you need to travel to the Lower 48? Please pay attention to guidance from local health authorities regarding pre-flight testing and recommended quarantine on arrival.

I’m hoping as more people get vaccinated, COVID-19 numbers will diminish as the year goes on.

Between now and May 24, you can fly from Anchorage to Detroit for just $123 one-way on Delta. Occasionally, you’ll find the same deal on United or American. Alaska Airlines charges a little bit more: $136 one-way.

I have relatives in Detroit, so whenever I see a good deal to Motor City, I send it to them, hoping they’ll come up and see us in Alaska. This is a great price and the connections are really good, particularly on Delta (the airline has a hub in Detroit) and Alaska. If you travel on Delta between now and March 30, the middle seats will be empty.

There’s no nonstop flight to Detroit, though. And in the age of COVID-conscious travel, nonstop flights are better. That’s because you don’t have to spend more time at crowded airports.

The nonstop angle makes American Airlines’ trio of nonstops from Anchorage more attractive, starting May 6. The best prices are available on flights in May. Between Anchorage and Chicago, American’s flights start at $139 one-way for travel between May 6 and May 24. The return flights are a little more: $149 one-way.

Between Anchorage and Dallas, American offers nonstop flights starting at $141 one-way (from May 6). Return flights are available from $151 one-way, but you have to change planes in Phoenix. If you want to fly back on the nonstop, it’s double the price: $289 one-way. I don’t know why.

Between Anchorage and Phoenix, American charges $141 one-way for travel through June 10. The return flight is the same price.

American Airlines also is flying nonstop this summer between Fairbanks and Dallas. The price is $143 one-way between May 6 and May 20. The return price is the same.

Are you waiting for some bargains on Alaska Airlines? The carrier has taken a different strategy through the fall. Instead of just dropping the price, the airline runs a targeted promotion that requires a discount code. During the football season, Alaska offered discounts between 10% and 50% in conjunction with its “chief football officer,” Seattle Seahawks quarterback Russell Wilson. Lately, Alaska Air CEO Brad Tilden sent out a “Thank You” letter announcing his retirement. At the bottom of the letter were instructions on how to redeem a 30% discount. Watch for more of these schemes this winter.

As the virus drags on, traveling will continue to be a chore, I suppose. Make sure your mask fits well. Wash your hands like crazy. Stay away from people, although that’s difficult on a plane. And when it’s your turn to get vaccinated, be like Lin-Manuel Miranda in the opening scene of the Tony Award-winning musical “Hamilton.” That’s where he proclaims loudly that he’s “not gonna throw away my shot!”