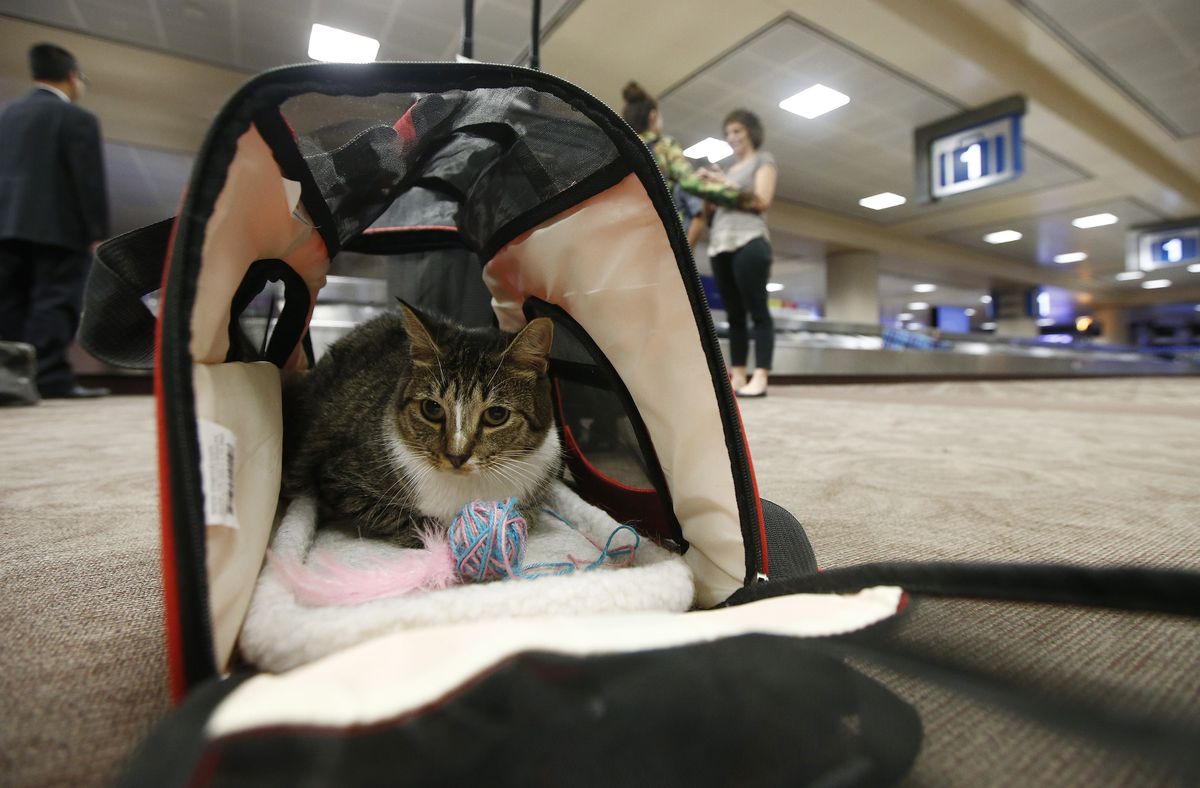 FILE - In this Sept. 20, 2017, file photo Oscar the cat, who is not a service animal, sits in his carry on travel bag after arriving at Phoenix Sky Harbor International Airport in Phoenix. Industry officials believe many that hundreds of thousands of passengers scam the system each year by claiming they need their pet for emotional support. Those people avoid airline pet fees, which Oscar's owners paid. (AP Photo/Ross D. Franklin, File)

FILE - In this Sept. 20, 2017, file photo Oscar the cat, who is not a service animal, sits in his carry on travel bag after arriving at Phoenix Sky Harbor International Airport in Phoenix. Industry officials believe many that hundreds of thousands of passengers scam the system each year by claiming they need their pet for emotional support. Those people avoid airline pet fees, which Oscar's owners paid. (AP Photo/Ross D. Franklin, File)

The age of free-flying emotional support animals is ending as most major airlines, enabled by new Department of Transportation rules, limits which critters can fly and how.

Alaska, American, Delta, Frontier, JetBlue, Spirit and United are among the airlines that have said they will no longer allow emotional support animals. Southwest “will announce any changes to our current policies in the near future,” it said this week.

“Southwest applauds the U.S. Department of Transportation for issuing a new final rule that imposes common-sense limits on the transport of animals in the aircraft cabin,” a statement from the airline said.

The changes come after years of complaints that travelers were bringing poorly trained and sometimes poorly behaved pets on flights by getting them certified as providers of emotional support - a process for which there has been a robust online marketplace. In some cases, passengers brought pigs, monkeys, ducks and other unusual creatures; one owner of a peacock famously tried to bring the animal on a flight.

More than a million people flew on U.S. airlines with emotional support animals in 2018, according to the industry group Airlines for America.

[Alaska Airlines is the first to ban emotional-support animals]

The new rules went into effect this week, but the airlines that have adopted the changes have set different dates for when they will stop allowing the animals to fly. American says only trained service animals can fly in the cabin Feb. 1 and beyond, while United will stop letting emotional support animals fly after Feb. 28. Carriers are not honoring new requests for emotional support animals as of Jan. 11.

But what does that mean for travelers?

Which animals are allowed to fly freely in the cabin?

Once airline rule changes go into effect, only trained service dogs will be allowed to fly without charge and without being in a carrier. Those that were considered “comfort” or “emotional support” animals - dogs, ducks, rabbits or others - will no longer be allowed on planes without a cost or without being in a carrier. Some may be brought on under existing pet policies.

What if I have a letter from a doctor?

This no longer matters to airlines that have changed their policies under the new Department of Transportation (DOT) rules. They are now focused on the specific training of the dog, not the need of the human - even if a mental health professional attests to it.

What is a trained service dog?

According to the DOT, these dogs are “individually trained to do work or perform tasks for the benefit of a qualified individual with a disability.” That includes physical, sensory, psychiatric, intellectual or other mental disabilities.

The Justice Department says that under the Americans With Disabilities Act, examples of that work include guiding people who are blind, alerting those who are deaf, pulling a wheelchair and protecting someone who is having a seizure.

“Service animals are working animals, not pets,” the department says.

The DOT says its rule does not require the owners of service animals to have the training done by third-party schools or groups.

“Service animal users are free to train their own dogs to perform a task or function for them,” the agency says.

How do I prove that my animal meets the requirements?

Travelers must fill out a DOT form attesting to the dog’s health, training and behavior at least 48 hours before their flight, if they have their ticket by then. That form asks for the name of the person or organization that trained the animal as well as a phone number, and it requires passengers to check a box saying they understand that if they knowingly make false statements, they can be subject to fines and other penalties.

Owners also have to acknowledge that if the animal demonstrates behavior showing that it “has not been property trained to behave in public,” it will be treated as a pet and subject to fees and other pet requirements.

Airlines may make a ruling about whether the dog’s training is adequate. American Airlines says employees are trained “to ask certain questions to determine if your animal is a service animal acceptable for travel.” And JetBlue says crew members “can provide further determination of training or lack thereof.”

How do I fly with my emotional support animal now?

If the animal meets the airline’s requirements for flying as a pet in the cabin, you can bring it onto the plane as if it were a carry-on item. Only some types of animals qualify - typically dogs and cats, but sometimes household birds or domestic rabbits, depending on the airline. They must be small enough to move around in a carrier that fits under the seat, and they have to stay in the carrier while on the plane. Airlines limit the number of pets per flight.

Larger pets would only be able to fly as cargo, but not all airlines carry pets as checked items.

Will I have to pay?

Yes. To bring a pet into the cabin, the cost ranges from $99 each way on Frontier to $125 on American, Delta, JetBlue and United.

I have a trained service dog; what are the requirements?

Airlines are requiring service dog owners to fill out DOT forms with information about the animal’s health, training, and behavior, and to turn them in 48 hours before a flight. For flights longer than eight hours, owners also have to fill out a form confirming that the dog would either not need to relieve itself or could do so on the plane “without creating a health/sanitation issue.”

Carriers are allowed to require a service dog to either fit on a handler’s lap or within their foot space on the floor. Dogs have to be harnessed or leashed and be well-behaved.

My service animal is not a dog. Am I out of luck?

Yes. The DOT said it decided against adopting a proposal that would have let other species, including capuchin monkeys and miniature horses, fly as service animals.

“Overall, dogs have the temperament and ability to be trained to do work and perform tasks while behaving appropriately in a public setting, and while being surrounded by a large group of people in the close confines of an aircraft cabin,” the department said in its final rule. “Although airlines may choose to transport other species of animals, such as cats, miniature horses, and capuchin monkeys, that assist individuals with disabilities in the cabin for free . . . they would only be required under federal law to recognize trained dogs as service animals.”