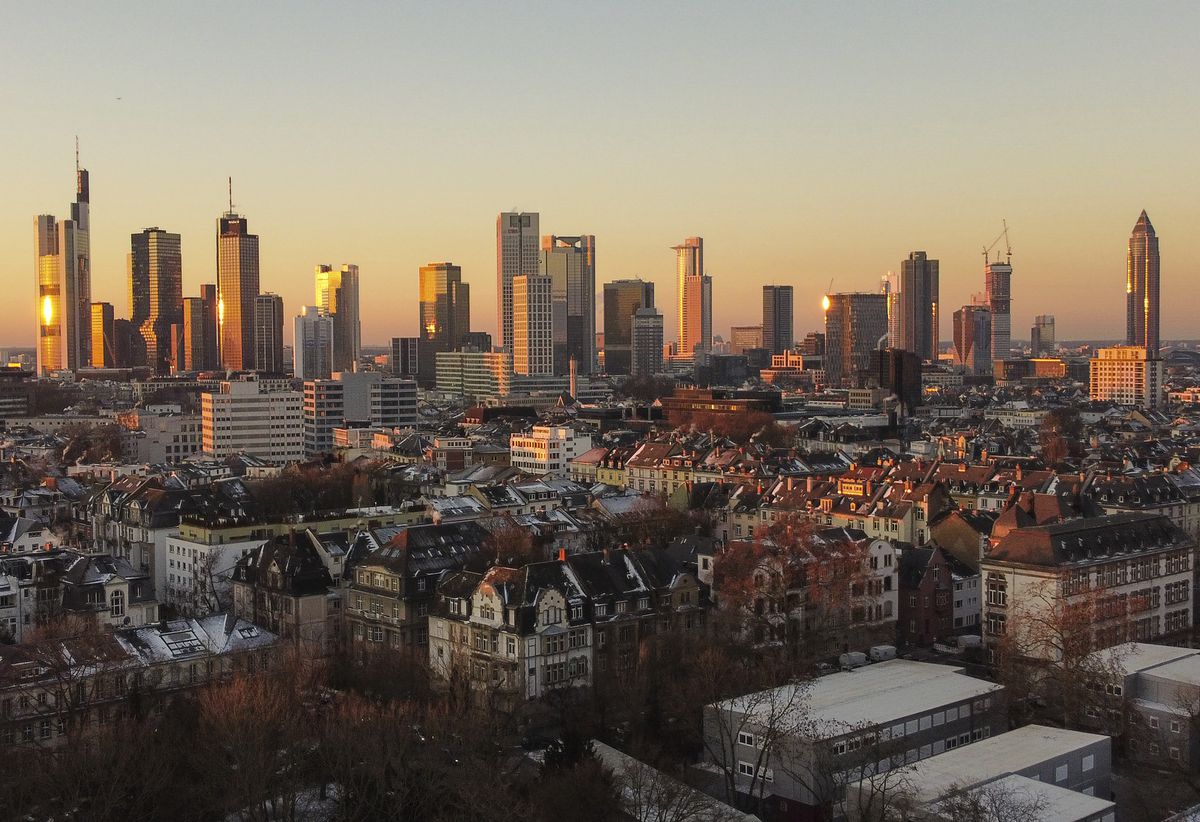 The rising sun lights the skyline of the city center of Frankfurt, Germany, on Feb. 12. Two international airlines still have nonstop flights scheduled from Anchorage to Frankfurt starting in early summer, but whether those flights will take off on time depends mostly on Germany’s closed borders. Right now, U.S. travelers are not permitted to visit Germany on vacation. (Boris Roessler/dpa via AP)

The rising sun lights the skyline of the city center of Frankfurt, Germany, on Feb. 12. Two international airlines still have nonstop flights scheduled from Anchorage to Frankfurt starting in early summer, but whether those flights will take off on time depends mostly on Germany’s closed borders. Right now, U.S. travelers are not permitted to visit Germany on vacation. (Boris Roessler/dpa via AP)

Travel is a privilege. Not the travel that you do to get to work at a remote site, or the flight you take to go see the doctor. No — I’m talking about flying to Hawaii on vacation, or going on a trip to a foreign country

Up until last year, many travelers took vacations for granted. But in the shadow of the COVID-19 pandemic, we discovered the virus spread quickly on airplane flights and cruise ships.

What followed was a long year of death, sickness, lockdowns and quarantines. Now, though, vaccines are available. Those who love to travel have a special obligation to get vaccinated as soon as possible. The vaccine protects you and helps stop the spread of the virus, whether at home or abroad.

Countries around the world are wrestling with how to reopen safely to welcome visitors. Earlier this week, Iceland announced it will welcome fully vaccinated citizens of the U.S., enabling them to skip the mandatory tests and quarantine.

Some countries are welcoming visitors without any test, including Mexico. More countries are welcoming travelers from the U.S. with negative COVID-19 tests, including Egypt and Costa Rica. An increasing number of destinations mandate that travelers have insurance that covers COVID-19 expenses. But others, like Vietnam, Indonesia and Japan, are closed completely to vacationers.

Talking about international travel, Delta Air Lines CEO Ed Bastian said in an interview, “Vaccination will be the ultimate form of entry into international markets.”

In the meantime, two international airlines, Condor and Eurowings, still have nonstop flights scheduled from Anchorage to Frankfurt starting in late May and early June. But whether those flights will take off on time depends mostly on Germany’s closed borders. Right now, U.S. travelers are not permitted to visit Germany on vacation. There are some exceptions for travelers making connecting flights. But remember, these flights are designed primarily to bring German visitors to Alaska.

Delta’s Bastian predicts that widespread international travel is at least a year away. Many countries, including France, Italy and Portugal, still are locked down and are not accepting tourists. In the meantime, Delta is concentrating on flying within the U.S. That may be one reason why the airline beefed up its schedules to Anchorage and Fairbanks.

With the new flights came some lower prices. From Anchorage or Fairbanks to Seattle, Delta dropped the fare to $90 one-way, starting April 10. From Anchorage to Tampa, the price dipped to $138 one-way between April 10 and May 16. From Fairbanks to Salt Lake City, the fare is just $100 one-way on Delta starting May 6. And Delta dropped the price from Juneau, Ketchikan and Sitka to Seattle to $99 one-way between May 29 and Sept. 30. On its new weekend nonstops to New York and Detroit from Anchorage, Delta is offering tickets for $149 one-way starting May 29.

As more airlines continue to turn their gaze to Alaska for the summer, expect fares to drop — and to stay low for the summer. One exception is Hawaii, where nonstop rates still are high, more than $300 one-way.

Hawaii, because of stringent anti-COVID protocols, has mostly kept the virus at bay. The island of Kauai was even more restrictive than the other islands, essentially cutting off almost all tourist arrivals. Next month, though, Kauai plans to rejoin the state’s “Safe Travels” program, which calls for a negative COVID-19 test within 72 hours of your Hawaii flight. One encouraging statistic which helped officials move forward was the vaccination rate in Kauai: 23% of island residents have received at least one vaccine shot.

It looks like we’ll have another “Show up for Alaska” summer this year. The big cruise ships aren’t coming and the Canadian border still is closed. But residents, along with visiting friends and relatives, are ready to see more of Alaska.

On board a Kenai Fjords Tours “Coastal Explorer” voyage last weekend, there were many families with small children enjoying the cruise. For parents and children alike, it was a a chance to get out and see some sights. The gray whales weren’t out, but the crew spotted bald eagles, sea lions, porpoises, seals, sea otters and cormorants — against the backdrop of a bluebird day on the water. The captain nosed the boat up close to a cliff with a frozen waterfall to the delight of the kids on board. Most of the travelers on board were Alaskan, but there were some European visitors, too.

If you want to boost your summer travel plans in Alaska, take part this coming week, March 22-28, in a virtual travel treasure hunt, the “Quest for the Ultimate Alaskan Adventure.” (Full disclosure: I am the organizer of this event.) “Questers” complete challenges to earn points toward Alaska travel prizes: plane tickets, rail trips, glacier cruises and guided adventures inside Alaska’s national parks. The cost is $10, or $15 for a team of two.