Seattle maintains its allure as a favorite destination for Alaskans 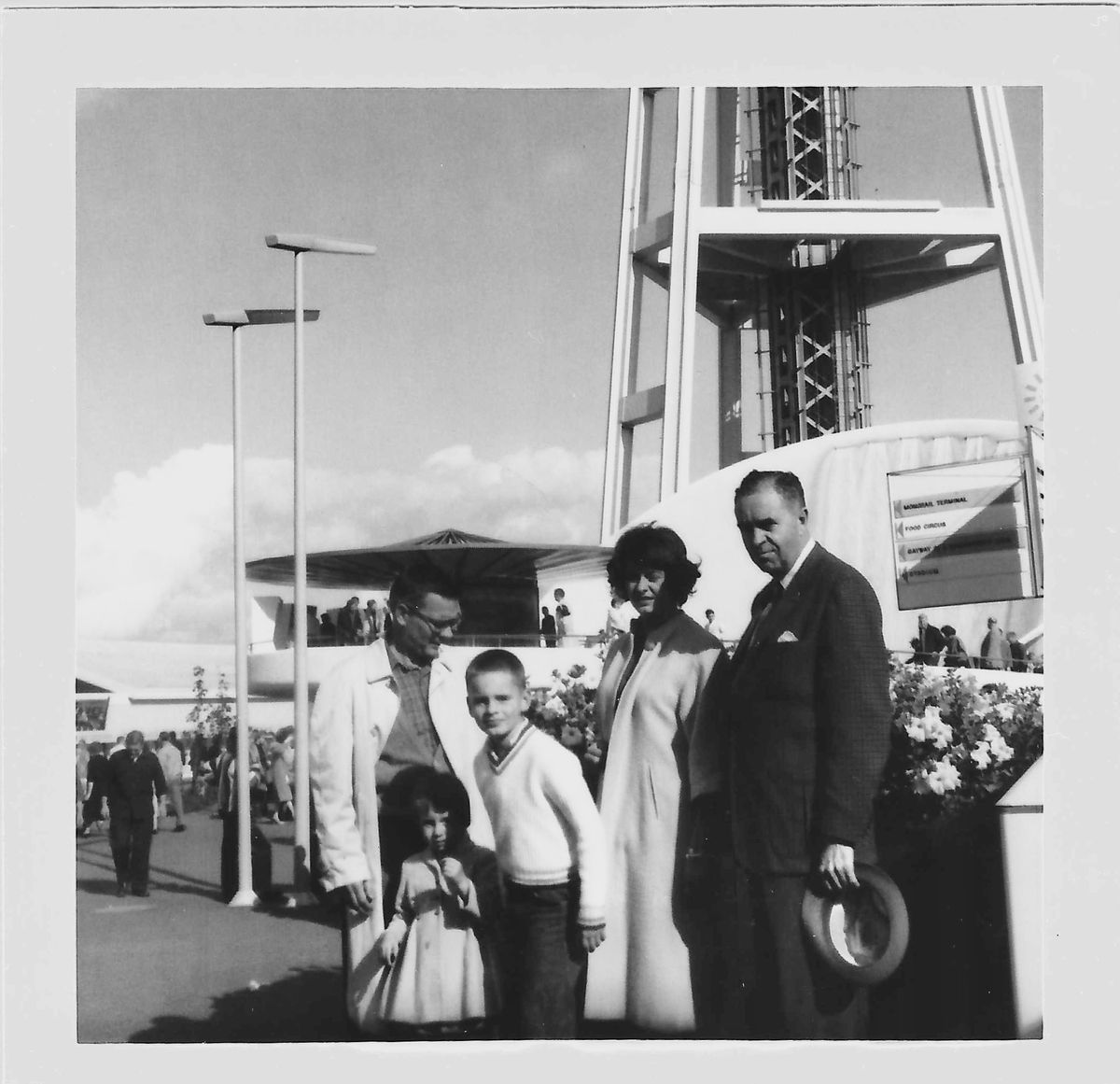 The McMurren family, including Scott McMurren's grandfather, visiting the Space Needle in 1962 at the Seattle World’s Fair. (Courtesy Scott McMurren)

The McMurren family, including Scott McMurren's grandfather, visiting the Space Needle in 1962 at the Seattle World’s Fair. (Courtesy Scott McMurren)

April 21 was the Space Needle’s 59th birthday. My family made the trek in 1962 to the Seattle World’s Fair, where the Space Needle had its grand opening, although we weren’t there the first day.

Last week, my sister and I made a return visit. Things were different. The Space Needle has been remodeled with floor-to-ceiling glass. Like other attractions in Seattle, the Space Needle and the adjacent Chihuly Garden and Glass exhibit are limiting the number of visitors and selling timed-entry tickets due to COVID-19 protocols. Go to the Space Needle website, order your tickets and pick your time. Everyone still has to wear a mask, and the staff encourages social distancing.

The views, as usual, are spectacular. It’s a real investment, though. Tickets are $35 for adults. If you’re going, consider getting the combo ticket, which includes admission to the incredible Chihuly Garden and Glass exhibit. Dale Chihuly is famous for his fantastic blown glass sculptures The way the glass is woven in to the gardens is spectacular. Have your camera ready.

We tried to ride the Seattle Monorail from Westlake Center to the Space Needle, but it wasn’t open. It’s supposed to reopen May 5.

Lots of other attractions were either closed on certain days and had limited hours. For example, the Seattle Art Museum is open Fridays through Sundays from 10 a.m. to 5 p.m. That doesn’t include the outdoor Olympic Sculpture Park, which is located 1 mile north of the main museum. Don’t miss the sculpture park — it’s great. There’s a beautiful path that winds across the railroad tracks and down to the waterfront, and there’s even a small beach with beautiful views of Elliott Bay and the Olympic Peninsula.

Although the Monorail was not yet open, Sound Transit’s Light Rail link from Sea-Tac to downtown is running without issue. The cost is $3 per person, one-way. That’s good because Seattle is suffering from a shortage of rental cars, like many other locations, including Anchorage. I checked on a rental next weekend at Sea-Tac. The cheapest car was more than $90 per day.

Tom Norwalk is the head of Visit Seattle, the organization in charge of attracting meetings, conventions and visitors.

“Everybody was hit hard,” Norwalk said. “Seattle faces a tougher road to move forward. There have been social protests, store closures and tight COVID-19 restrictions resulting in financial impacts.

“There is a lingering effect in the downtown core,” he added.

Those effects include boarded-up storefonts and tents pitched on the sidewalks.

Visitors who get down to the waterfront still can visit the Seattle Aquarium, which is open every day with timed entries and limited capacity. You can still go on the giant Ferris wheel on Pier 57 at “Miners Landing.”

Next door to the Great Wheel, you’ll see many of the Argosy Cruises fleet tied up. Right now the only scenic cruise operating is the Blake Island Fast Ferry. Blake Island is a state park in the middle of Elliott Bay with trails and beaches. Spend an hour or two, or take the whole day and explore. The cost for the ferry ride is $29 round-trip.

Norwalk is cautiously optimistic about the summer season and COVID-19 vaccine distribution. But he also notes that because of rising COVID-19 numbers, Seattle may downgrade to a “phase two” status, which may result in more limited dining options and access to attractions.

“We’re hoping this will be a temporary setback.” he said.

Things looked pretty nice from the waterfront deck at Anthony’s Seafood at Pier 66. The late April sun was beaming as we bit into a couple of mahi mahi tacos.

That gave us the energy to climb up the steps from the waterfront to First Avenue and then to Pike Street. Walking up toward Capitol Hill, there still are some stores that are open but have plywood over all the windows. As we walked past the Convention Center and over the freeway, we passed the Seattle Roastery, which is a Starbucks Reserve location. Here they roast the beans and deliver them into special hoppers for baristas to craft your drink. There’s also a full menu of delicious breakfast treats, pizzas, sandwiches and a bunch of other yummy treats. We ate breakfast there two days in a row.

Save room for dessert, though, from Salt & Straw, the custom ice cream shop that started in Portland. They opened a location a few blocks uphill from Starbucks on Capitol Hill, and it’s definitely worth the hike. I opted for the sea salt ice cream with caramel ribbons, paired with strawberry/coconut water sorbet. I’m a better man for having that ice cream — and a bigger one, too.

In spite of the issues Seattle is facing, I’m hooked on the city. Since I’ve been traveling there for almost 60 years as a tourist, there’s a long list of things I want to see and do in the Emerald City:

Kenmore Air is celebrating its 75th anniversary flying around the Puget Sound area, including the San Juan Islands. To celebrate, they’re offering $75 flightseeing rides from the Kenmore base. That’s located on the north shore of Lake Washington. The flightseeing rides are 25 minutes long in either a DHC-2 Beaver or a DHC-3 Otter. You’ll get a nice view of the Space Needle and the waterfront and all of the new skyscrapers.

As a bona fide aviation geek (or “avgeek”), I never miss an opportunity to visit the Museum of Flight at Boeing Field, located between Seattle-Tacoma International Airport and downtown. The museum has incredible collections of early Boeing aircraft, war birds from the World Wars, plus several one-of-a-kind planes. The Air Force One plane that carried President John F. Kennedy’s body back from Dallas, the world’s fastest plane, the SR-71 Blackbird, the first Boeing 747… and the Space Shuttle trainer. It’s a fabulous museum. Right now, the museum is only open Thursdays-Sundays and features timed-entry tickets to limit attendance.

Norwalk is optimistic about the sports teams that are playing this summer in Seattle, including the Seattle Mariners (limited to 9,000 fans in the stadium).

The old Key Arena, which is near the Space Needle, is being completely renovated and renamed the Climate Pledge Arena. When it’s finished, it will host Seattle’s new NHL team, the Seattle Kraken. It also will be the home for Seattle’s WNBA team, the Seattle Storm. The first scheduled concert (one of many) is country music star Eric Church, who is booked for Oct. 30.

So many Alaskans have deep roots in Seattle, whether it’s from growing up in Washington, going to school or just visiting friends over the years. Cheap airfares make it affordable to reach from Anchorage, Juneau and Fairbanks. Will you return to Seattle as it heals from the long hard ride through 2020? I know I will.