Want to explore Alaska’s national parks? Here’s where to start. 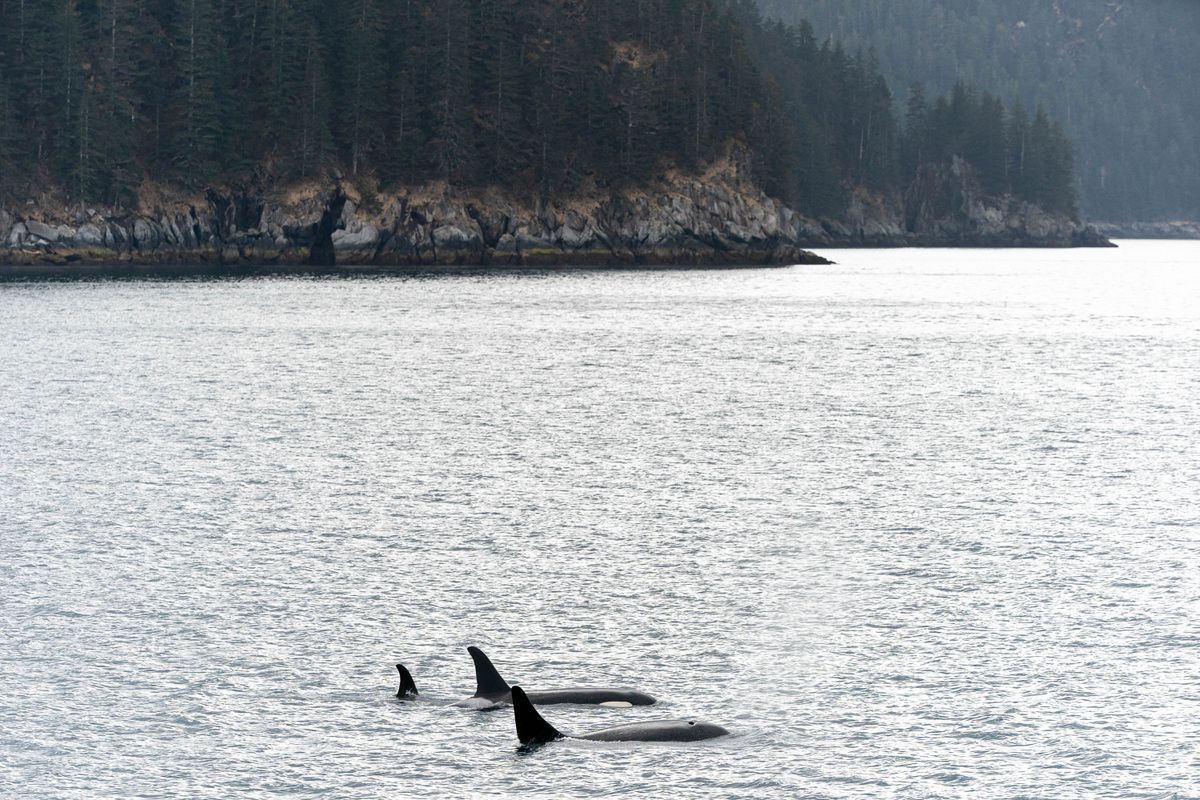 A pod of orcas swims in Agnes Cove on the Aialik Peninsula in Kenai Fjords National Park on Sunday, May 16, 2021. (Loren Holmes / ADN)

A pod of orcas swims in Agnes Cove on the Aialik Peninsula in Kenai Fjords National Park on Sunday, May 16, 2021. (Loren Holmes / ADN)

Like last summer, the quest for vacations with wide-open spaces is in high gear. There’s renewed interest in exploring our national parks.

That quest is what draws many travelers to Alaska. Most of those visitors stayed home last year to sit out the pandemic. But this year, many folks are vaccinated and are ready to travel again. Airlines are adding more nonstop flights to Alaska, combined with some really good fares (particularly to Fairbanks).

Parks in the Lower 48 are expecting record-busting crowds this weekend. And the combination of traveling Alaskans and adventurous state-siders means more people are lining up to see national parks in Alaska, too. Here are some of my favorites.

Start your adventure in Seward. Most people who visit the park leave on one of the sightseeing cruises, departing from Seward’s small boat harbor. You don’t have to get very far before you’re seeing glaciers in the park, including Bear Glacier. But the most stunning glaciers are the ones you’ll see deeper in the part in Aialik Bay. Whether you sail with Kenai Fjords Tours or Major Marine Tours, your boat captain will get close to the glacier and shut the engine off. That way, you can hear the glacier heaving and cracking — and maybe even calving in front of you.

Both companies also offer cruises that go deeper into the park to Northwestern Fjord. Aside from glaciers, the cruises showcase the incredible wildlife in the park: whales, sea birds, eagles, porpoise, sea lions — the works. The journey to Northwestern Fjord can take 7-8.5 hours, depending on the boat at the specific route.

[Photos: Orcas are the stars of a Resurrection Bay boat tour prime for wildlife viewing]

Starting June 11, one of Phillips Cruises’ boats will move from Whittier and start sailing each day in Kenai Fjords National Park. The “Bravest” will be the biggest, fastest boat on the route. Because of its size, the Bravest will board at the nearby cruise ship dock — which will not be busy this summer.

If you want to stay in the park, Alaska Wildland Adventures operates a small eco-lodge in Aialik Bay, near Pedersen Glacier. Guests at Kenai Fjords Glacier Lodge stay in individual cabins with a view of the glacier. From the main lodge, it’s just a few steps down to Pedersen Lagoon, where the lodge has some big canoes to paddle across to the other side. The lodge also provides guided kayak trips and hikes in and around Aialik Bay.

They call Denali “The Great One,” and the mountain certainly lives up to its name. You can access Denali from three sides: south, east and north.

From the south, Talkeetna is your takeoff point — Talkeetna Airport, to be exact. Fly with K2 Aviation, Talkeetna Air Taxi or Sheldon Air Service up to the mountain and land on a glacier. Depending on the weather, your pilot may fly up the Great Gorge of the Ruth Glacier. Then, your pilot will head left for a glacier landing on the Don Sheldon Amphitheater. Even though you’ll get about 30 minutes “in the park,” walking on the glacier is a little slice of heaven. Don’t forget your sunscreen, or your camera.

From the east, enter Denali on the park road. There’s only one road. The Tundra Wilderness Tour goes from the park entrance to Mile 62, the Stony Hill Overlook. It’s a good opportunity to watch for wildlife, as well as the mountain itself. There’s also an Eielson Shuttle, which goes directly to the Eielson Visitor Center at Mile 66. Make reservations online for tours and transit passes.

Due north of Denali is the Wonder Lake campground, located at the end of the park road (Mile 92). It opens on June 8. Denali’s camper shuttle is available to take tent campers to the end of the road, but you can’t go out and back on the same day. You have to spend at least one night camping. The lodges in nearby Kantishna that I checked with (Camp Denali, Denali Backcountry Lodge) were sold out for the 2021 season.

There are many camping options at Denali’s six campgrounds, but you have to make reservations ahead of time. Also, several hotels are available near the park entrance, including the McKinley Chalet Resort, Denali Park Village and Denali Bluffs.

This is the nation’s largest national park, and you have a couple of options if you’re driving from Anchorage. It’s a five-hour drive to the Chitina Airport (look for the Boeing 747 sign before you reach the town). Don’t expect a big jet to touch down on the gravel strip alongside the Copper River, though. McCarthy-based Wrangell Mountain Air operates a couple of scheduled flights each day between Chitina and McCarthy, in the heart of the park. It’s just a 60-mile flight in a single-engine Cessna, but it’s spectacular, featuring some glacier fly-overs, a couple of mountain passes and an eagle-eye view of the old Kennicott Copper Mine.

The McCarthy Road between Chitina and McCarthy is maintained by the state. It’s one of those 35-mile-per-hour roads, so budget a little more than two hours for the drive. It’s also beautiful, following the old railbed from the Copper Valley Railroad. There are a couple of crumbling narrow bridges along the way, as well as a few newly improved bridges over some raging rivers.

One big draw in the park is the easy access to the Root Glacier. St, Elias Alpine Guides and Kennicott Wilderness Guides both offer guided trips on to the glacier. If you’re more adventuresome, sign up for an ice-climbing clinic. It’s fun!

The National Park Service has done a great job restoring many of the mine buildings from 100 years ago. On one of the park service’s free tours, you’ll learn about the history of the mine. When it was operating, the Kennecott Mine was the world’s largest. For an in-depth tour, take one of St. Elias Guides’ guided walks.

There are several vacation rentals in the McCarthy/Kennecott area. Or, you can stay in McCarthy at Ma Johnson’s Hotel or up the road in Kennecott at the Kennicott Glacier Lodge. No private cars are permitted in McCarthy. Travelers can park on the far side of the river and cross the pedestrian footbridge. The attendant at the parking lot will call your hotel shuttle.

Although it’s big and beautiful, what you see from McCarthy is just one sliver of the park. Consider taking a flightseeing tour. Or, your wilderness guides can set up an overnight camping and climbing adventure deeper in the park.

[How to prepare to travel to Hawaii, in 6 steps]

You can’t drive to this park. In fact, most of this season’s cruises through the park were canceled. But Alaska Airlines and Alaska Seaplanes fly the 60 miles to Gustavus from Juneau during the summer.

If you’re staying at the Glacier Bay Lodge, located about 10 miles from the airport, they’ll come and get you with their shuttle.

The lodge is located in Bartlett Cove, which is also where the tour boat departs each morning at 7:15 a.m. The all-day tour goes deep into Glacier Bay. I think we may have crossed into Canada at the top of the bay. In addition to the giant glaciers on all sides of you, keep a sharp lookout for whales. We saw humpbacks on our last voyage, as well as both brown and black bears. Watch for sea lions, otters, eagles and a variety of other critters.

Here’s another park that’s off the road system. Still, it’s popular with the limited number of visitors who make the journey.

In a normal year, travelers would fly from Anchorage to King Salmon, then catch Katmai Air or another air taxi up to Brooks Lodge. On arrival, everyone goes to “bear school,” where you learn about the bears that are fishing at nearby Brooks Falls. It’s not unusual to see one or two bears lumbering down the beach as you taxi in on the float plane.

This year, though, the campground is limited to 25% capacity, according to the National Park Service.

The campground is adjacent to the privately owned Brooks Lodge, where cabins still are available between June 1 and 17, according to Melissa Albert with Bristol Adventures. “The rest of the summer is sold out,” she said.

If you make it out there, be sure and go on the tour to the Valley of 10,000 Smokes. Ride in a specially equipped bus to a lookout over the ash-filled valley. It’s all that’s left after the 1912 eruption of Novarupta. Hike down to the valley floor to the fast-running Ukak River. The river constantly is chipping away at the ash to make a dramatic canyon through the debris.

Katmai National Park is big. Other visitors enter the park from the east side of Cook Inlet. Bear-watchers take off from Homer on day trips, landing on the beach.

National parks aren’t the only parks in Alaska. But it’s a great place to start your adventure.