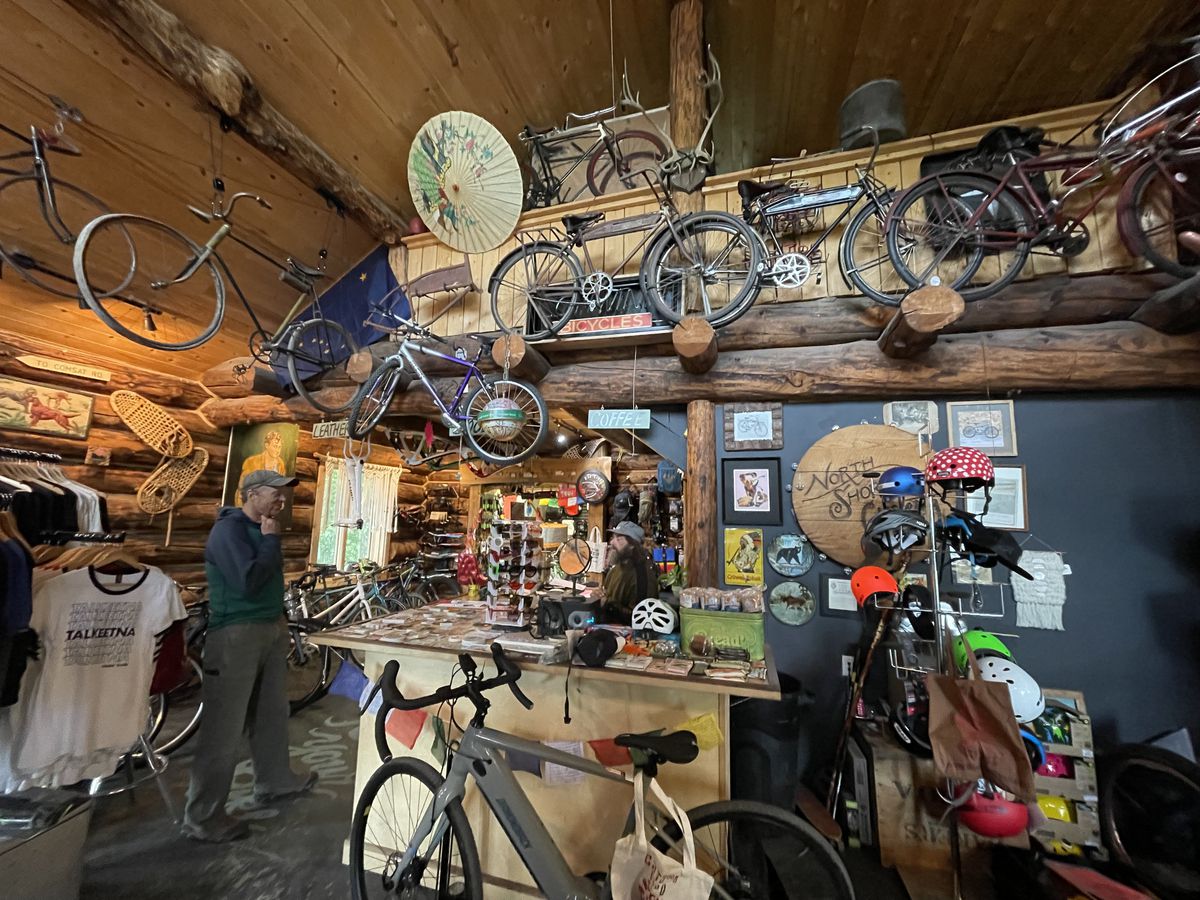 Shawn Thelen, right, of North Shore Cyclery in Talkeetna talks to a customer in his bike shop. (Scott McMurren)

Shawn Thelen, right, of North Shore Cyclery in Talkeetna talks to a customer in his bike shop. (Scott McMurren)

After a long flight, or a long drive, it’s fun to get out and stretch your legs on a long walk.

During the summer, though, you have to outrun the mosquitoes. So I’m better off on a bike. I’ve rented bikes in several cities around the world — and in many communities in the Lower 48.

You can’t miss Thelen’s shop. It’s right across from K2 Aviation’s office at the Talkeetna Airport. There are bikes of every variety outside the shop. The inside is more bike museum than bike shop. On one wall, Thelen has an entire row of vintage Stingray bicycles with banana seats. To the right of the entrance are a couple of motorbikes from the 1950s. Then in the back, there’s a shop where Thelen and his crew builds custom bikes.

There are a bunch of bike trails nearby that I’ve been hearing about. The Bike and Brew Tour is pretty straightforward: Get a bike and head back toward the Talkeetna cutoff until you find the Denali Brewing facility. Your tour includes a 45-minute back-of-the-house tour, complete with tastings. To rent a regular bike, the tour is $90 per person. Upgrade to an e-bike for $30 more ($120). For $200 per person, a guide will take you on some of the cool trails, then head to the brewery for the tour. All of the tours include a taxi ride back to town.

No tours were available on the day I was there, but one of the e-bikes was warmed up and ready to go. So I grabbed it and headed off to visit a friend who lives a few miles out of town.

Initially, the concept of the pedal-assisted e-boost seems like cheating. But as Thelen said, “It’s all about enjoying the ride even more.”

Sure enough. You still break a sweat when going up the hills, but the boost comes at just the right minute.

Denali Brewing has two locations in Talkeetna: the downtown brewpub on Main Street in Talkeetna and the tap room at Mile 2 on the spur road along the cutoff from the Parks Highway. You can choose from a variety of beers on tap or do what I did: get a flight of five samples. At the tap room, they also serve some delicious pizza. It’s the perfect way to finish off a nice bike ride, even though there was some e-assistance.

You don’t have to go far to build your own bike and brew tour. In Anchorage, there are plenty of breweries that could be strung together on a bike tour — Code for Anchorage has even produced an interactive online map that makes route planning easier. For more of a guided experience, Big Swig Tours offers a $249 package that includes a morning bike ride and rental followed by a tour of breweries in the afternoon.

In Girdwood, Alyeska Resort recently opened its lift-accessed bike park. You can take your own bike up on the lift and ride it down the mountain. But my friends who are bike enthusiasts say it’s a good idea to rent Alyeska’s bikes for the adventure, in addition to all the body armor for your head, your chest and limbs. It seems a little crazy to me — but bikers love it.

After you’ve taken your chances on the mountain, make your way over to Girdwood Brewing, which is near the resort (2700 Alyeska Highway). Again — try the flight. It’s a great way to sample a few different kids of beer. Plus you can check out the on-site food trucks.

Up in Fairbanks, there are a couple of options. Near Esther Dome, there is an extensive network of singletrack trails. This is great for mountain bike enthusiasts. I checked with Goldstream Sports, which is located about 5 miles out of town at the base of Esther Dome. “Oh these are easy trails,” said one of the folks who answered the phone. “I take my mom on them all the time.”

So, the friendly staff set up a nice bike for me to go for a ride. Up, up, up I went to the trails from the parking lot. The granny-gears on the new mountain bikes are amazing and make climbing a breeze. Once I got to the trails, I found them to be everything they promised: thrilling and scenic. The trails are well-maintained, but with lots of roots. Singletrack enthusiasts love these trails.

“You don’t have to take the jumps if you don’t want to,” said the young bike expert who helped me with my helmet. I bailed out pretty early, though. But if you love singletrack biking, it’s a nice setup.

Down on the banks of the Chena River, I found Canoe Alaska, which rents bikes, paddleboards, canoes and kayaks. Soon, I’m going to try the “Downtown Bike and Boat” trip. Start out at one of their locations with a bike and cruise on the flat, paved trail along the river. It’s not nearly as thrilling as the singletrack adventure — but I’m OK with that. Then, when you reach Canoe Alaska’s downtown location, trade in your bike for a kayak and paddle back to where you started. (Canoe Alaska is also conveniently located about a mile away from HooDoo Brewing, a local favorite.)

If you’re down in Juneau, check in with Cycle Alaska for their own version of a bike and brew tour. Cycle Alaska is located near the Juneau-Douglas bridge. The tour starts at the base of the Mount Roberts Tram, where you load up in a bus for a trip to the Mendenhall Valley. The bike trip is 8.5 miles and includes a stop at the Mendenhall Glacier visitors center. After the ride, you get a trip back to town to pick up your voucher for a flight of beers at the Hangar on the Wharf.

Cycle Alaska also rents bikes, so you can strike off on your own to find Devil’s Club Brewing, Alaskan Brewing or Amalga Distillery.