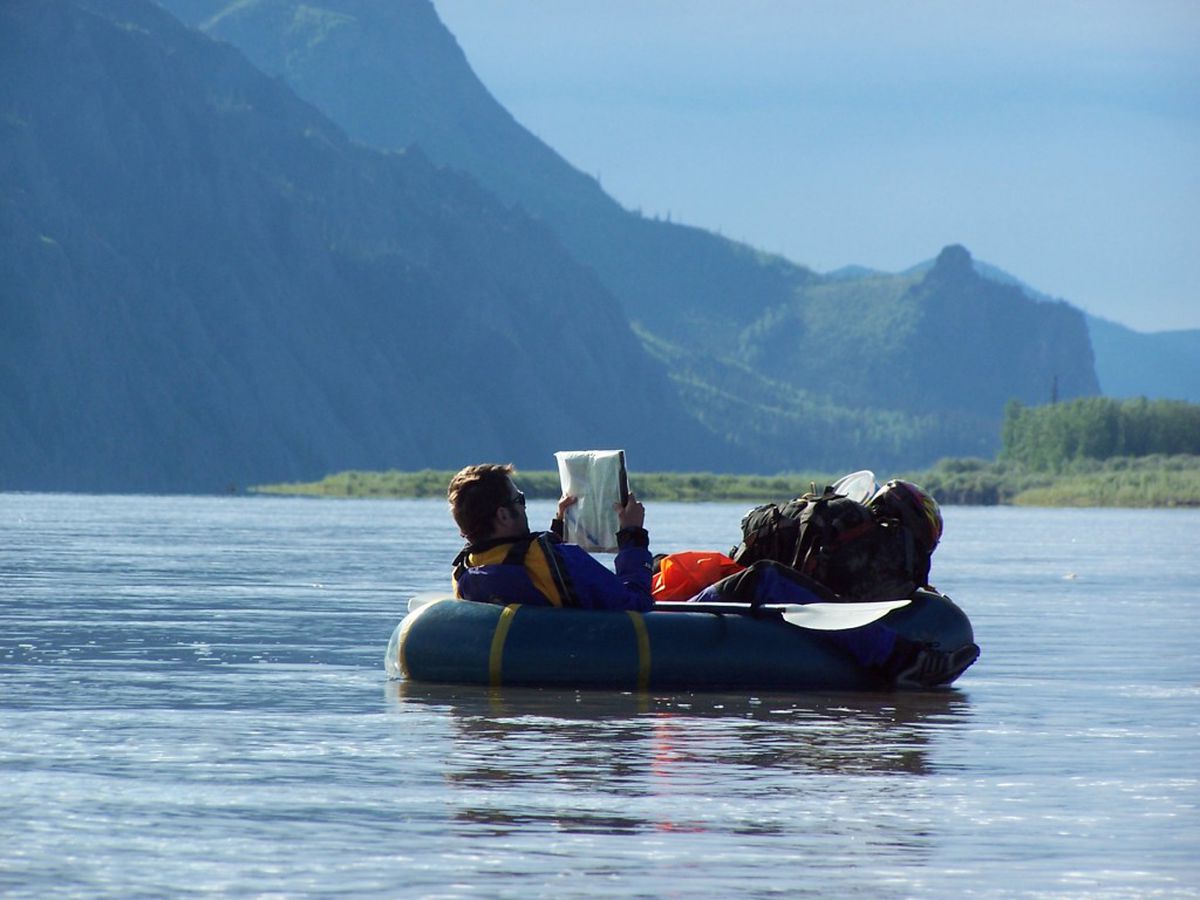 Checking maps to make sure the boater does not pass the town of Circle while packrafting the Yukon River. (Kyle Joly)

Checking maps to make sure the boater does not pass the town of Circle while packrafting the Yukon River. (Kyle Joly)

Since the first edition was published in 2007, "Outside in the Interior" has been the go-to book for nonmotorized recreation enthusiasts north of the Alaska Range. The book included everything from short day hikes and paddles around Fairbanks to multiday routes in the deep wilderness of Interior Alaska and the Arctic, as well as ski and mountain bike trails. It was an immediate hit with both newcomers and longtime residents of the region.

Snowy Owl Books, an imprint of University of Alaska Press, has just issued a second edition that includes updated maps, expanded descriptions of older routes and information about trails and areas that have opened up for recreational use since the first edition was published.

Author Kyle Joly, a wildlife biologist with the National Park Service, moved to Fairbanks from Anchorage in 2004 and quickly realized that information on local hiking and paddling routes was lacking.

Pulling it all together

"First thing I do when I get somewhere new is to look at the guidebooks," Joly explained. "And there just wasn't any, so I made one."

Descriptions of a few of the regional trails and rivers could be found in various Alaska outdoor guides and websites, but no one had put it all together in one package.

In the first edition, Joly wrote, "My motivation for writing this book is to let newcomers, as well as old-timers, know what there is to do in the region and dispel the myth about the Interior's paucity of trails."

"My hope is that better awareness and more people in love with their trails and open spaces will serve to protect those resources over the long term, as well as gain support for new trails and recreation areas," he elaborated by email.

Response to the first edition was enthusiastic. Joly pointed out that it "made the best-seller list at (Fairbanks bookstore) Gulliver's and the local Barnes and Noble. Even sourdoughs found trips they hadn't been on."

Kristin O'Brien, a biology professor at the University of Alaska Fairbanks, noted that " 'Outside in the Interior' was one of the first books we acquired after moving to Fairbanks 12 years ago. It's been our source of inspiration for day hikes, backpacking and canoeing trips, and backcountry skiing."

Steven Hansen, a Fairbanks attorney, echoed O'Brien's sentiments, saying, "I picked the book up as a guide for activities in the area. For years I used it like a checklist, trying to complete each of the hikes, floats and skis in the book. Happily I still have many adventures left."

The new edition adds a few routes, including the Tanana Lakes Recreation Area operated by the Fairbanks North Star Borough. Visitors can find two lakes, one for motorized use, the other for human-powered craft, as well as a hiking trail and access to the nearby Tanana River.

Another addition is the Ester Dome Singletrack built in stages in the years since the book's first edition was published. It features two loops and several connector trails. While primarily designed for mountain biking, it's also popular with runners and walkers in summer and skiers and snowshoers in winter.

Farther afield, the Mastodon and Nugget Creek trails, still under construction but usable, are found in the Chena River State Recreation Area section of the book.

Aside from the new destinations and additional trail information, the biggest change in the new edition is the maps. The DeLorme maps that were used in the first edition have been replaced by much-clearer Google Maps, which are printed larger, making them easier to navigate.

While the new edition is more than 50 pages longer than the first, its dimensions are a bit smaller and the corners are rounded for easier stowing in a backpack. The paper quality is better and the binding stronger, making it more rugged, too.

"It's helped us find gems, like the Castner Glacier," O'Brien noted.

For Hansen, reliance on "Outside in the Interior" has practically defined his life in Fairbanks.

"Part of me thinks that when I've finished the last trip in that book, my time in Fairbanks will be up," he said. "So I'm planning on hiding it away when I only have a couple pages left."