Slugging it out in Sitka 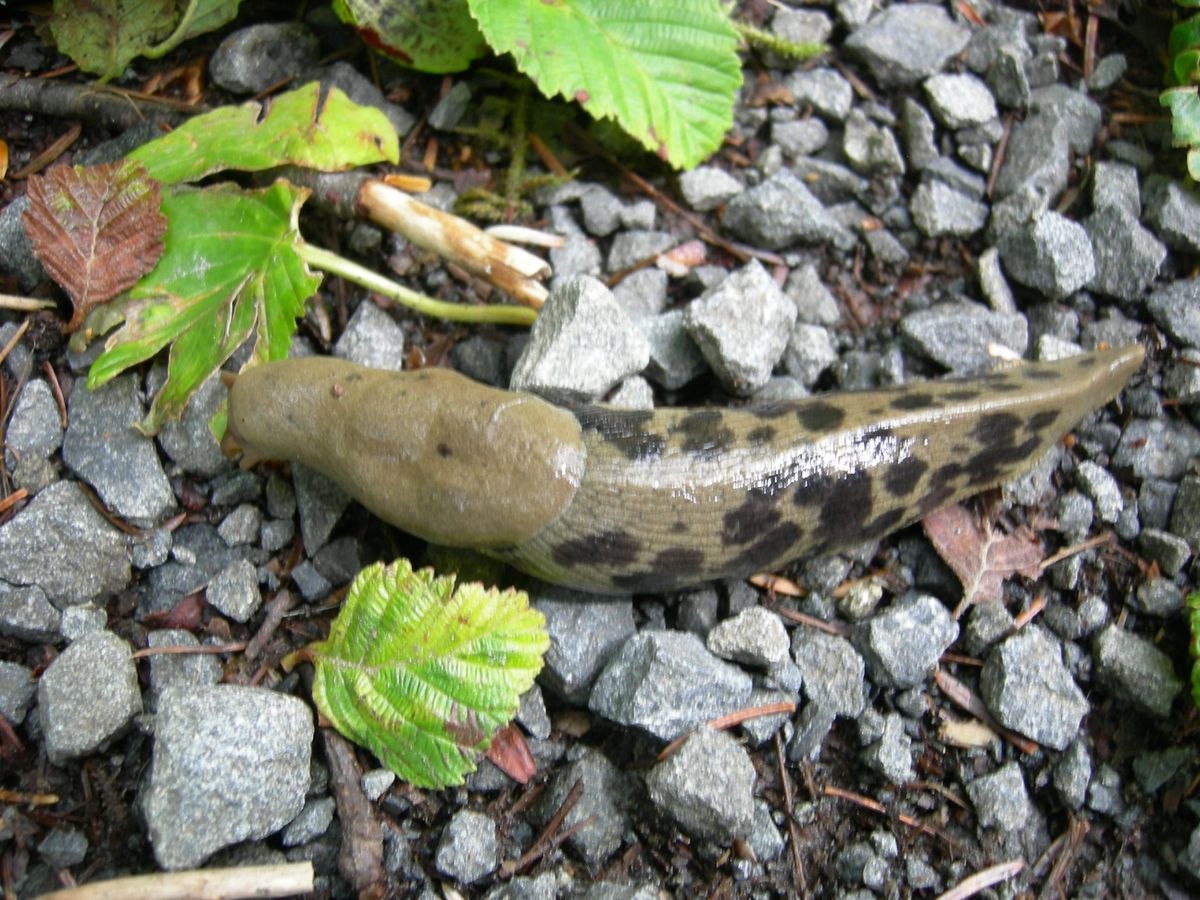 The Pacific banana slug is common in Southeast, including the popular Cross Trail in Sitka. It can reach up to 10 inches long. Most in Sitka were olive-colored with black spots. Elsewhere, they can be bright yellow. (Photo by Nancy Lord)

The Pacific banana slug is common in Southeast, including the popular Cross Trail in Sitka. It can reach up to 10 inches long. Most in Sitka were olive-colored with black spots. Elsewhere, they can be bright yellow. (Photo by Nancy Lord)

SITKA — This town has many attractions: all that Russian heritage, Native culture, shopping and eating, art and music, scenery, and, of course, boating and hiking. On a recent visit to take in the Sitka Summer Music Festival, I discovered something new — an 8-mile trail through woods behind town.

The Cross Trail, a project of Sitka Trail Works Inc., was begun in 1998 as a jobs project for displaced loggers. It's wide and graveled, suitable for biking as well as walking. While connecting various neighborhoods, it traverses a magical forest of giant old stumps moldering among mosses and ferns, shadowed now by new generations of alders and hemlocks.

When hiking, I usually carry binoculars for spotting birds. But on the Cross Trail, I found myself watching my feet, to avoid stepping on the many large slugs sharing the trail.

At home on Kachemak Bay, our garden-variety slugs are easy to overlook — unless, as a gardener, you wage war on their multitudes. But in Southeast Alaska, slugs are nearly kitten-size and seem less like inconsequential invertebrates than animals to reckon with.

Thus I found myself crouching, again and again, to study the markings and the behaviors of Ariolimax columbiana, the Pacific banana slug, some of them 6 inches long. (They can reach 10 inches.)

I've seen bright-yellow banana slugs, but the ones I watched in Sitka were olive-colored with black spots. I later learned that individual banana slugs can change color depending on diet, light exposure, moisture levels, general health and age.

The slugs were busy. Nearly every one I saw was chewing on a green leaf. (Something I also learned later: slugs, like most other mollusks, have teeth on their tongues. Or what passes for tongues; they're actually structures called radulae, ribbon-like bands covered with tiny teeth. Technically, they rasp rather than chew.)

I watched the slugs pull and turn the leaves, slowly devouring them. In the quiet, I could hear their gentle grindings.

Their tentacles, two sets, were mostly nubby on their heads but sometimes were extended and groping. The upper ones have light-sensitive eyespots on their ends for detecting light and movement. They no doubt conveyed my presence to what passes for a slug's brain. The shorter tentacles, just in front of the mouth, are for feeling and tasting.

What I noticed above all was each animal's different pattern of spots, not unlike the variation in dalmatians and leopards, or maybe Holstein cows. The inkblot patterning is quite beautiful, as are the entire animals: each long and sleek with a foot extending from a rounder mantle. Every keel or ridgeline provides shape and stability to a body that feels like a soft leather.

I imagined returning the next day or next year, coming upon the same slug with the black spot on its mantle, or the one with the big blotch on its right side. Supposedly, banana slugs can live up to seven years.

They find one another via their slime trails, and they do "mating dances" to exchange sperm with their fellow hermaphrodites. Very slow mating dances, I assume.

To the slug-averse: please note that banana slugs are native to their forests and play a positive role there. They feed largely on detritus, helping to recycle nutrients to new growth, and their excretions spread spores and seeds while providing nitrogen-rich fertilizer.

In the Sitka woods, songbirds were singing and a woodpecker rapped on a tree, but I couldn't stop looking down.