What's behind the seeming disappearance of an Alaska tern? Scientists try to find out. 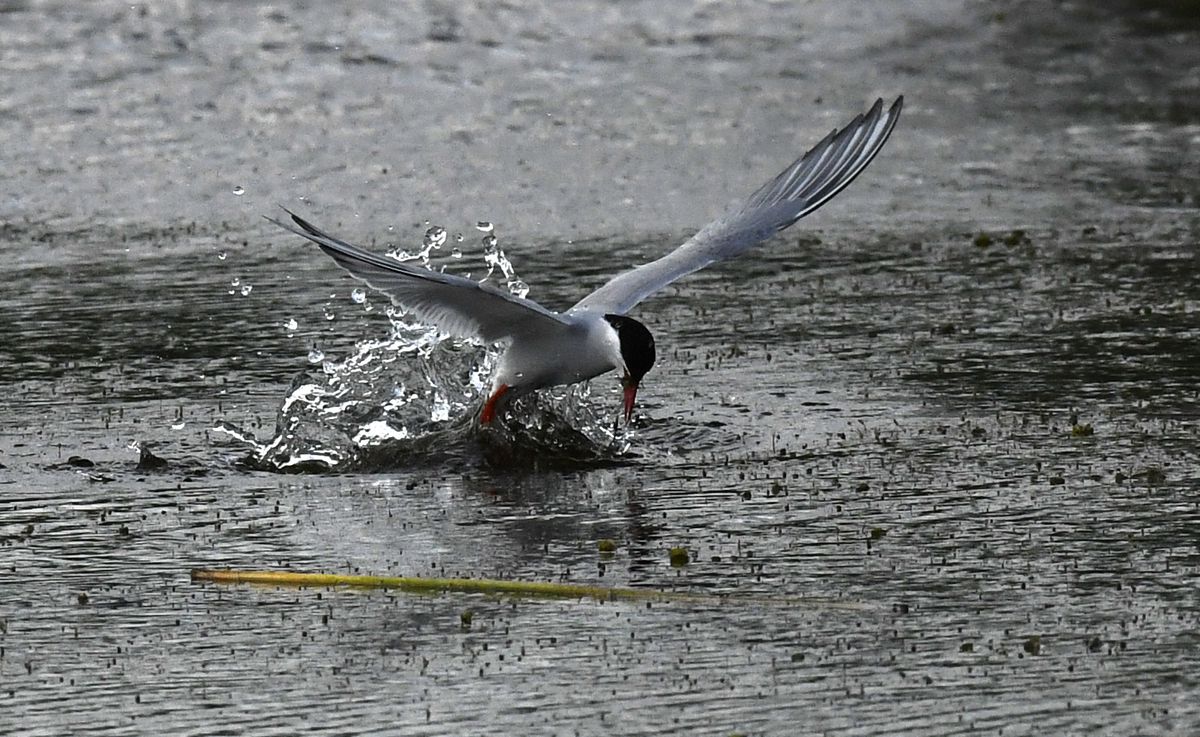 An Arctic tern rises out of the water of Potter Marsh. Scientists are concerned that a related species, the Aleutian tern, is disappearing from its breeding grounds. Terns feed on insects and small fish. (Bob Hallinen / Alaska Dispatch News)

An Arctic tern rises out of the water of Potter Marsh. Scientists are concerned that a related species, the Aleutian tern, is disappearing from its breeding grounds. Terns feed on insects and small fish. (Bob Hallinen / Alaska Dispatch News)

YAKUTAT — For a few days in early summer, pairs of biologists tiptoe through minefields of camouflaged nests to flush and count midair Alaska's largest population of breeding Aleutian terns.

"It is very challenging," said U.S. Forest Service biologist Susan Oehlers, just back from a counting trip near this Southeast town. "It's not perfect — it gives you just a rough estimate."

Challenges include sorting Aleutian terns, with their melodic whistle, from their intermingled and nearly identical cousins, the more aggressive Arctic tern. Both are aerial acrobats, wheeling, hovering and plunging up to 30 miles per hour to snatch small fish.

Recently, another cousin has moved in, the larger Caspian tern, which typically nests farther south in Icy Bay.

"We never used to see them at all," said Oehlers, who counted six on a recent trip.

The annual bird count is part of a multiagency effort to learn more about the Aleutian tern, which seems to be disappearing from its Alaska breeding grounds. Published last year in the journal Marine Ornithology, the first analysis of population trends showed a 92 percent decline in about 30 years. Researchers wrote that the data could herald "an almost unparalleled population crash" of the Alaska seabird.

Scientists acknowledge that their numbers, while alarming, are imprecise. It's difficult to monitor a bird that tours the globe annually and changes nesting sites regularly. Aleutian terns are fickle, Oehlers says. "We never know where they will be or when."

The population seems to be stable in Russia, which hosts 80 percent of the world's estimated 30,000 Aleutian terns. But even if the Alaska counts are off, it's a warning, Oehlers says.

"We really need to do some more work to clarify the status of the population, and what is the level of the decline," she said.

Tan, wiry and always on the move herself, Oehlers is the face of the Yakutat Tern Festival, founded six years ago and sponsored by a number of agencies, organizations and local businesses. To say the festival is a chance to kill two birds with one stone is to deploy a tern of phrase organizers might not appreciate, though it is apt. The early June gathering promotes education and ecotourism at a time when budget deficits and climate change threaten.

"Let me know if I've missed one," he told residents and visitors gathered for his keynote speech, titled "As the World Terns." He's heard there's an entire book dedicated to tern puns, which his students at the University of Hawaii must hope he never finds.

"Are terns worth saving?" Duffy asked the audience. Not surprisingly, his answer is yes.

"To me personally, they're an amazing beauty and certain inspiration," he said. "And they manage to do this amazing migration."

Terns take on whole oceans, slide over mountains and avoid large predators, says Duffy, who has a picture of a brown bear and cubs strolling unaware past a tern nest hidden on the ground.

With high-tech help, scientists are beginning to learn about the Aleutian tern's habits. In 2010, researchers strapped light-sensitive leg bands on more than 100 Aleutian terns to track their latitude and longitude. Six of the banded birds have been retrieved.

Oehlers said scientists had "basically zero information" about Aleutian terns before the project.

Scientists would like to do more tracking using newer technology that takes advantage of satellites to yield precise locations. Each tag costs several thousand dollars, money researchers don't have, and every crucial battery-life extension must be traded off against weight. Aleutian terns weigh about 4 ounces, only a little larger than robins.

The related Arctic tern holds the record for the longest bird migration, up to 50,000 miles, practically from pole to pole, including crossing the Andes.

The travelers have no choice. The rugged Andes stretch 4,500 miles down the west coast of South America, and southbound terns are compelled to make a left to get from the Pacific to the Atlantic to avoid flying into big weather on the continent's southernmost headland, Cape Horn. To accomplish this, they slip through a mile-high pass between southern Chile and Argentina, says Duffy.

Off the coast of Patagonia, Arctic terns feed before heading south again to rest on the ice, where there are few predators. They may become flightless and fast for about a week as they replace plumage worn out by the southern migration.

The less-studied Aleutian terns are believed to head west across the Aleutian Chain as they leave Alaska by way of Kamchatka in the Russian Far East and turn south to fly over the Korean Peninsula and the troubled South China Sea.

"Pollution levels are mind-boggling," Duffy said. The birds winter in tropical Southeast Asia before retracing their route to Alaska in the spring.

If Aleutian terns are running into trouble, it may be during their southern sojourn.

"We have no idea what they're doing out there," Duffy said. Pirates in the region have discouraged researchers from finding out.

"Plastic is becoming a major, major problem," Duffy said. Seabirds' stomachs become so filled with indigestible detritus that they starve to death.

Terns may provide an early warning about the impacts of global warming. As dissolved carbon acidifies oceans, it could kill plankton that feed the small fish that feed the terns. In Alaska, Arctic terns eat shrimp at the outwash of glaciers that are now receding.

To view terns, some festivalgoers hiked to foggy Harlequin Lake at the foot of the calving Yakutat Glacier, while others ran a soggy 10-kilometer trail race closer to town. Arctic and Aleutian terns performed overhead for kayakers near the mouth of the Situk River, a rich source of smelt and salmon fry. Eagles observed totem-like from every spar as children raced by on ATVs and subsistence fishermen stretched their nets.

Yakutat has long been a mecca for sports fishermen, but the festival fills a niche and a few rooms at local inns between the much-anticipated steelhead and salmon runs.

"We have a lot more to offer," Oehlers said.

Cultural groups raise money during the festival by selling Navajo tacos and brown-bag lunches and hosting seafood banquets that feature live music, Tlingit dancers and outside artists, authors and scientists. The festival offers fresh opportunities for local students from kindergarten to high school. Visiting bird experts spend hours in their classrooms and accompany the kids on bird-watching outings.

"They don't necessarily realize that not everybody has terns, and this is an important colony to the species," Oehlers said.

As ever in Alaska, threats to the Aleutian tern include egg-eating mammals and other birds.

"Over the millennia," Duffy says, "there's been a war between ravens and terns." Aleutians hide by moving their colonies often.

Alaska Natives have traditionally eaten tern eggs, too, which worries some researchers, but not Duffy. Tlingit children have always learned to leave at least one egg in the nest.

Scientists have a more urgent concern about tern egg consumption. Before returning to Alaska, terns may hang out around Fukushima, ground zero in Japan's nuclear disaster five years ago. The plan is to test tern eggs for radioactive cesium.

"It's speculation," Duffy said. "We just want to make sure there are no surprises."

For the sake of terns and an abundant array of nesting shorebirds around Yakutat, regulatory agencies post signs and urge residents to leash their dogs and keep ATVs on trails during the nesting season. But some locals are at least as concerned about their own survival.

As festivalgoers gathered for a barbecue out back, the Yakutat Borough Assembly met in the high school to consider the 2017 budget. Expected general fund revenue has plunged some 20 percent over two years, largely a ripple effect of the state's economic woes.

Local officials worry about the possible impacts of a growing number of government designations and regulations designed to protect wildlife. Aleutian terns are not listed under the federal Endangered Species Act, but the U.S. Forest Service already has deemed them a "sensitive species," a precursor that triggers special land-management decisions.

Still, the borough is one of about a half-dozen partners that collaborate to put on the tern festival, which attracted about 25 visitors and many locals. And some participants remain hopeful that birds might be part of the solution, rather than the problem.

Are terns worth saving? Who knows — if people will pay to see them, perhaps birds can help Alaskans, too.